Ankylosing spondylitis – severe disease, against which no effective medication.

All existing therapies that help to achieve only one thing: to stop the progress of disease, reduce inflammation and relieve the patient from pain. In milder forms of the disease used non-steroidal anti-inflammatory drugs and muscle relaxants, with a heavy need basic tools, one of which is Sulfasalazine. It is believed that this medicine with prolonged use can significantly improve the patient’s condition.

What is ankylosing spondylitis

International name of the disease – ankylosing spondylitis. It appears in splice joints, in which the spine turns into a rigid “box”, limiting movement. It’s hard to do tilts sideways and forward, and in severe forms it loses the ability to move independently and is bedridden.

The leading symptom is pain. It starts with the sacrum and is usually localized on one side, may radiate to the lower back or leg. Unpleasant sensations appear early in the morning or at rest and are held when a person performs physical work.

The pain is localized also in the thoracic spine. The person feels stiffness, sneezing, or cough give him a sharp discomfort. Patients with severe forms of the disease breathe not chest and belly. As the progression of the disease deteriorating posture. There is a characteristic of ankylosing spondylitis “the pose of the applicant”: bent legs and arms lowered to his chest his chin, hunched back.

In parallel with pathology of the spine and joints are developing and related ailments. Patients often diagnosed glaucoma or inflammation of the iris of the eye, kidney and cardiovascular system. High risk of developing pneumonia and tuberculosis.

To prevent the loss of human disability, eliminate pain and improve the patient’s condition, use of medication and non-pharmacological (physiotherapy, exercise therapy) treatment methods. In severe forms of the disease the patient is prescribed potent drugs, one of which is Sulfasalazine.

In some cases, prescribe Sulfasalazine

As soon as the patient is diagnosed with “ankylosing spondylitis”, the doctor prescribes him a non-steroidal anti-inflammatory drugs. The treatment begins with Diclofenac or Indomethacin. These drugs have similar action and the difference between them lies only in the fact that the first has a less pronounced negative effect on the stomach and intestines. According to many doctors, these drugs are most effective against severe disease.

These agents have anti-inflammatory and analgesic action and the level of efficiency equal to Indomethacin. Sometimes patients are prescribed hormonal agents.

If ankylosing spondylitis is not help nonsteroidal funds, pain and stiffness increase, patients prescribed glucocorticosteroid drugs. If they, too, are inefficient, require admission Sulfasalazine. This drug is recommended when the peripheral form of the disease, it is considered an analogue of Methotrexate.

How does the drug

Sulfasalazine is a drug for the basic therapy. It stops the inflammatory process in the joints, reduce stiffness in the back and is struggling with the manifestations of peripheral arthritis. Today, however, there are no data confirming its ability to increase the mobility of the spine.

Medical drugs to use long term to get the answer to the question, it is effective in your case or not. Usually doctors prescribe it for a period of three to six months. After that, it becomes clear, whether brought therapy positive results.

Then the patient begins to take the drug at maximum dosage in order to consolidate curative effect. After reaching the “peak” dose is gradually reduced. Practice shows that after the abolition of Sulfasalazine the effect may persist for several months, provided that the patient continues to take non-steroidal anti-inflammatory drugs, even in minimum quantities.
After a few months it all comes back “full circle”: an inflammatory process in the joints develops again, the patient feels pain and stiffness. It is connected with the fact that the drug can slow down the development of ankylosing spondylitis, but are not able to completely get rid of it.

Often doctors recommend beginning to take Sulfasalazine in small doses. It is necessary to understand how the body will react to the contained active ingredients that we see any individual intolerance. To enhance the therapeutic effect of the use of funds, it is combined with other anti-rheumatic drugs: it goes well with them.

For the prevention and treatment of diseases of the JOINTS our constant reader uses the increasingly popular NON-surgical method of treatment is recommended by leading German and Israeli orthopedists. Thoroughly acquainted with him, we decided to offer it to your attention.An important feature of therapy Sulfasalazine is that it is relevant only in the treatment of ankylosing spondylitis in the peripheral form. In other words, the drug is able to exert a beneficial effect on the joints, but is unsuitable for treatment of the spine and intercostal joints.

In addition to the beneficial action of Sulfasalazine can cause the body significant damage. It affects kidneys, liver, gastrointestinal tract, lungs and reproductive system. Sometimes under the influence of drugs on the skin, itching and rash. Also possible negative changes in the mental state of patients.

Knowing about a wide range of side effects, doctors carefully monitor patients receiving this drug. In the beginning of the course are shown to make regular tests of urine and blood. In the first month of taking the medication make them once a week, then once every two weeks, and then once a month.

If found that the drug acts on the body negatively, his reception immediately cease. The negative effects provoked by its use, quickly disappear after the rejection of drug therapy.
It is very important during the reception Sulfasalazine to drink as much liquid as possible. This helps to avoid side effects excrete the breakdown products of the substance can reduce the burden on the gastrointestinal tract.

The medicine is contraindicated for people with disorders of the liver and kidneys, those who have individual intolerance to sulfa drugs and salicylates. Pregnant women the drug is prescribed only in extreme cases, it is recommended to look for a more secure counterpart. If a woman started taking it during lactation, breastfeeding should be discontinued.

Treatment with Sulfasalazine in ankylosing spondylitis may take from three to nine months, so many patients wonder about is, does this drug with alcohol. Manual to it does not give a direct answer to this question, studies on this issue are also lacking.

Experts advise not to use the two substances at the same time. If you drank a glass or two, refrain from taking substances in the next few hours that alcohol and drugs did not happen direct contact.

If you mix alcohol with a medication, limit yourself to minimal amounts. Such a compound can be dangerous to your health, and the consequences of its use can be unpredictable, and even death.

It is important to remember that regular drinking alcohol creates an additional burden on the liver and kidneys, which are already experiencing tremendous strain in people with ankylosing spondylitis. In order for the treatment to be effective, it is better to refuse from drinking alcoholic beverages.

For the reference drugs used for the treatment of ankylosing spondylitis, is also Methotrexate. Clinical practice shows that this drug is less effective than Sulfasalazine, but some patients helps it.

Found effective remedy for pains and for the treatment of joints:Studies show that Sulfasalazine causes side effects less frequently than its counterpart. It cannot be denied that both tools can cause negative effects, but in the second case they are more pronounced.

Both drugs include the appointment of at least three months. Only after this period they accumulate in the body in sufficient quantity and can exert a pronounced therapeutic effect.
Practice shows that Sulfasalazine, taken a long course, can help not only in peripheral but also the Central form of ankylosing spondylitis. Analog – Methotrexate – effective only for treatment of joints.

It was originally used in rheumatoid arthritis, and then its properties were used in the fight against other ailments.

As of 2013 there were conducted over 11 research efficiency Sulfasalazine, which in total involved about 900 people.

On the basis of these observations conclusions were drawn:

It can be concluded that there is evidence that Sulfasalazine is effective or useless in ankylosing spondylitis. Current clinical practice does not allow to make conclusions about its harm or benefit, it needs more research.

On the Internet there is conflicting information about basic medication and its effectiveness in ankylosing spondylitis. There is evidence that it helps only in 60-70% of cases.
Some patients note that their condition has improved very much under the influence of the drug, the pain left in the morning takes less time to “disperse” and to stop feeling stiffness. There are reviews that the medication works much better than Methotrexate.

According to other people who have tried the drug on themselves, it gives a pronounced positive effect. Improvements are either absent or are insignificant. Often much more significant side effects are: severe allergic reaction, hives, itching, disturbances in the gastrointestinal tract.

Sulfasalazine is a potent substance, so it must be taken only under strict medical supervision. A qualified physician can determine the dosages to find the balance between harm and benefit from the use of medications. 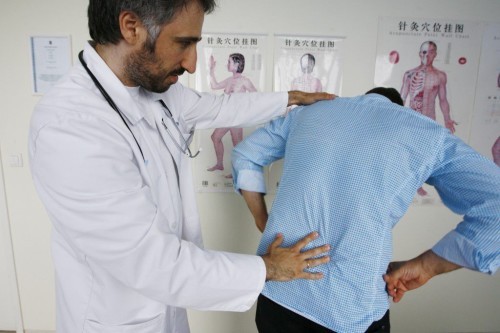 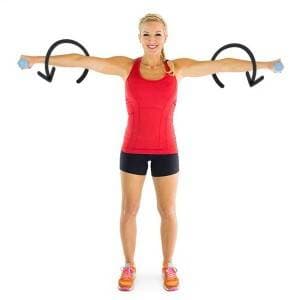 A set of exercises, gymnastics with scapulohumeral periarthritis 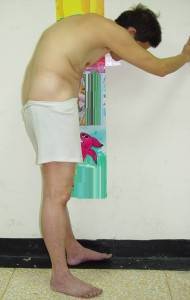