A fifth of all GP surgeries have shut in the past decade, according to an analysis. NHS statistics show there were fewer than 6,500 practices open in England in June — down from 8,100 in 2013.

Some have shut completely, leaving patients with no option but to travel. Others have merged, creating ‘mega-surgeries‘.

Closures have only pushed list sizes up further, making it even harder for patients to get appointments.

A dire lack of GP access has been partly blamed for fuelling record A&E waits, with desperate patients left under the impression that attending casualty is their only chance of being seen.

Face-to-face appointments have still yet to pick up to pre-pandemic levels, despite warnings from campaigners that. 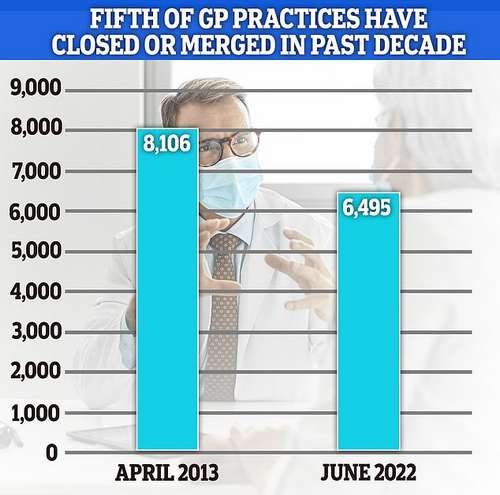 Remote hospital and GP appointments are ‘broadly’ a good thing because they reduce pollution, the NHS’ eco chief has claimed.

Thousands of operations were cancelled in 2021 and millions of people delayed coming forward due to fears about Covid.  Most GP appointments were moved online or done by telephone.

In comments that risk fuelling a row over face-to-face appointments, Dr Watts said remote care was ‘an intervention that should save carbon’ going forward.

Small GP practices are among the most popular with patients, surveys show.

Health leaders have previously warned the rise of mega-practices threatens the treasured doctor-patient relationship as patients are less likely to see the same medic each time.

Continuity of care has been shown to cut the risk of premature death and hospitalisation. 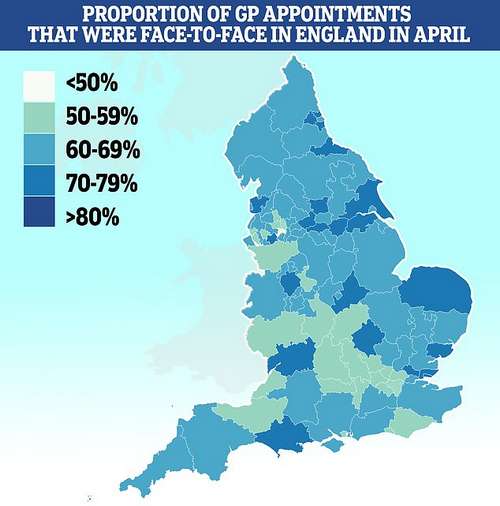 Dennis Reed, director of elderly charity Silver Voices, told MailOnline: ‘If local surgeries are closed, its going to move away from where people live, making them harder to access.

‘It’s part of the wider problem of moving away from the family doctor model. Ever since NHS England was set up, it’s been making surgeries bigger.

‘Patients never see the same doctor and it means they don’t know their history as well and you have to start again every time you go.

‘It might be good for saving costs but it makes the patient experience worse and could result in worse outcomes.’

Meanwhile. NHS Digital data shows there are now 61.7million patients on the books across England.

By contrast, the figure was closer to 56million a decade ago.

A survey earlier this year revealed that patient satisfaction with their GP surgery has plummeted to its lowest ever level, fuelled by the appointments crisis.

It has seen patients rushed through consultations like ‘goods on a factory conveyor belt’, a damning report warned last month.

A quarter of consultations are taking five minutes or less in some parts of the country. Doctors say squeezing in so many appointments raises the risk of missing diseases and prescribing the wrong drugs.

In order to make it easier for millions of patients to be seen, GPs have been told to start offering weekday evening and weekend consultations from October.

But family doctors, who pocket an average of £100,000/year, have threatened strike action over the NHS contract because they feel overwhelmed and fear the move will spread them even thinner.

Overall, there are now nearly 1,700 fewer full-time equivalent GPs than in 2015 — despite a Government pledge to hire thousands more.

Many are retiring in their 50s, moving abroad or leaving to work in the private sector because of soaring demand and paperwork.

The row over current levels of face-to-face appointments, in particular, has also been named as one factor for GPs quitting.

Prior to the pandemic over 80 per cent of GP appointments were held face-to-face but the rate now stands close to 60 per cent, with the rest done virtually.