A heatwave the struck the west coast and southwest regions over the weekend is heading east, and some experts are warning people to stay indoors, and to monitor the health of themselves and others around them when they do have to go outside.

More than 200 million Americans will experience temperatures of 90 F or higher later this week, with states like Illinois and Michigan likely to reach the triple digit market.

These are dangerous conditions, especially in some regions where not every home has an air conditioning system. People may suffer heat illness, heat stroke, and other issues if they are over-exposed this week.

Experts tell DailyMail.com that those with access to air conditioning should stay indoors, and those without should seek out a cooling center or even help from a neighbor if possible.

Outdoor activities should also be moved to later hours, or even nighttime, when things cool off, and laborers should be given frequent rest and be constantly monitored for signs of heat stroke, they say.

Around 140 cities will see record breaking temperatures this week with the heat wave possibly stretching as far north as Michigan. Iowa is also expected to suffer through temperatures around 100 F, according to reports.

Many may not realize how hot it is until they experience it for themselves, with temperatures around 20 F more than usual in some areas.

Dr George Chiampas, an emergency medicine professor at Northwestern University Feinberg School of Medicine in Chicago – a city expecting triple digit temperatures this week – warned that many people underestimate the heat over the summer, and suffer as a result.

Dr George Chiampas, an emergency medicine professor at Northwestern, warns that places like summer camps often are struck with heat related illness this time of the year

Many outdoor activities like summer camps, sports and more will continue this week as normal, even despite the heat wave. Many people who work in construction and other hard labor jobs that require them to be outdoors will be at risk as well.

Chiampas warns that people taking part in these activities are often at most risk of suffering heat illness. 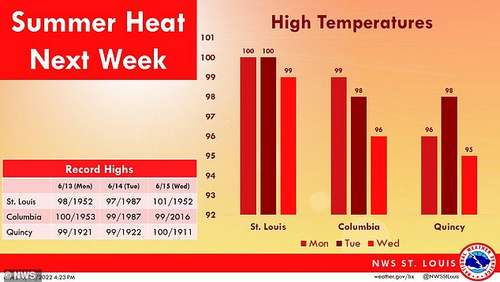 He describes heat illness as a spectrum, which slowly gets worse the longer someone is exposed.

Dr Brad Uren, an emergency medicine doctor at the University of Michigan, in the Detroit area that is also expected to get struck by high heat this week, explained the progression of symptoms.

First, a person may experience a heat rash, where small red bumps begin to appear where they should be sweating. These are minor, but early, signs of heat illness.

Then, a person will suffer heat exhaustion, where there heart will begin racing, they will feel nauseated, sweat profusely, and feel fatigued. At this point, a person should quickly head indoors or seek out shade to protect themselves from the heat.

Dr Brad Uren, an emergency medicine doctor at the University of Michigan, explained that once a person is so hot they stop sweating, they should seek medical attention

Finally, a person will suffer a heat stroke. The deadly stage is reached when the body’s core temperature gets so warm that it can no longer regulate itself.

Chiampas says that this occurs when a person’s internal temperature reaches 104 F.

Blood supply is rerouted from the brain, liver and kidneys to the skin in an effort to cool down. As a result, a person may get confused, belligerent, delirious and could even suffer a seizure.

‘You’ve shunted blood away from your vital organs because what you’re trying to do is get blood from your skin to make it colder,’ Chiampas said.

Uren says that one key sign that a person is suffering from a heat stroke is when they stop sweating. He warns that 20 to 60 percent of sufferers will die.

Those at most risk are the very old, 65 and up, and very young, aged two and below.

People who suffer from kidney disease, heart disease and are obese are also at a high risk.

Uren explains that some depression medications may also cause issues for a person’s internal heat regulation systems, putting them more at risk in high temperatures as well.

Another risk is high physical exertion, as the body naturally heats up when it is active, but has trouble diffusing that heat through sweat in hot, humid, conditions.

To avoid this, people who have to be outdoors for long periods of time physically exerting themselves should be constantly monitored.

Workers, for example, should be given more rest time in between spurts of work.

Parts of the Ohio Valley, south and The Death Valley have seen temperatures soar as a heat wave settles in several parts of the country

There are other major concerns, though. Some people do not have air conditioning in their home, as this type of weather is not typical for the region.

‘Days where it gets very warm, people who are elderly and may have children may be at higher risk,’ Uren warns about this group.

State and local leaders often open cooling centers in these times to help these people, and both experts recommend Americans in afflicted areas to seek refuge there.

Chiampas also made it clear that now is not the time for someone to try to conserve energy or save a few dimes on their power bill this month. The AC should be on in order to manage heat inside the home.

He also recommends for people to check on any neighbors they fear may have limited access to cooling too make sure others in their community or apartment building are ok.

Pets and children should not be left outdoors in the high heat either, both warn.

Wide swathing regions of the Midwest are expected to get slammed this week during the biggest heat wave of the summer.

Chicago and Minneapolis will see temperatures in the upper 90s by midweek. A heat advisory is in place in the Windy City until June 15.

Indiana is expected to see temperatures in the mid 90s accompanied by thunderstorms on Monday, reports WISHTV.

Though the hottest day of the week in the Hoosier state will be Tuesday with temperatures in the upper 90s expected. Those temperatures will last until Friday when it drops into the 80s.

At least one utility company has warned of rolling blackouts that could hit Indiana during the heatwave, reports WDRB. Rolling blackouts are power outages that last for anywhere between 15-30 minutes before ‘rolling’ into another area.

Neighboring Ohio will see temperatures in the 90s from Tuesday to Thursday.

In Louisville, Kentucky, temperatures in the upper 90s are expected during the day on Tuesday and only dropping into the 80s by nightfall. Highs in the city will remain around that level until next Saturday when they drop to 85.

Tennesseans are warned to expect temperatures in the 90s that will feel like the 100s thanks to wind from the Gulf of Mexico bringing moisture and creating humidity in the area. Those temperatures will last until Thursday.

Kansas will see temperatures in the middle to upper 90s for the next few days that due to the humidity will feel around 100 to 105F.

A record will be broken in St. Louis too if the hits 101F on Tuesday as expected, the previous record was 97F. The temperature will remain in the triple digits this week.

On the east coast, South Carolina will see temperatures that will feel like between 100F and 105F throughout the week.

As will North Carolina, with Charlotte expected to break its temperature record for June that was set back in 1958 when temperatures hit 97F.