Babies born through IVF are smarter but more prone to mental health problems than naturally conceived children, research suggests. Experts at the University of Helsinki followed 280,000 youngsters born in Finland between 1995 and 2000 until their 18th birthday.

Babies born using assisted conception techniques performed better in class and were less likely to drop out of secondary school. However, they were at a slightly higher risk of being diagnosed with a mental health problem — particularly anxiety or depression.

Researchers said better schooling performance among IVF babies may be down to richer families being more likely to afford the procedure. The increased risk of a mental health problems remained even when children born through IVF were compared to naturally conceived siblings.

Parents who’ve gone through IVF might be more attentive to their child’s health and take them to the doctor’s more often, the researchers theorised.

A team from the University of Helsinki looked at nearly 280,000 youngsters born in Finland between 1995 and 2000. Around one in 20 were born through IVF, artificial insemination and ovulation induction — known as medically assisted reproduction (MAR). While the group scored higher in school tests and were less likely to drop out of high school, they were also one per cent more likely to suffer mental health problems. Pictured: stock of close up in vitro fertilisation (IVF)

HOW COMMON IS INFERTILITY?

Infertility is when a couple cannot get pregnant (conceive) despite having regular unprotected sex.

Around 1 in 7 couples may have difficulty conceiving.

About 84 per cent of couples will conceive naturally within a year if they have regular unprotected sex — defined as every two to three days.

For couples who have been trying to conceive for more than three years without success, the likelihood of getting pregnant naturally within the next year is one in four, or less.

Britons are advised to speak to their GP if they were unable to get pregnant after one year of trying.

Infertility is usually caused by a lack of regular ovulation, poor quality semen, blocked or damaged fallopian tubes and endometriosis. 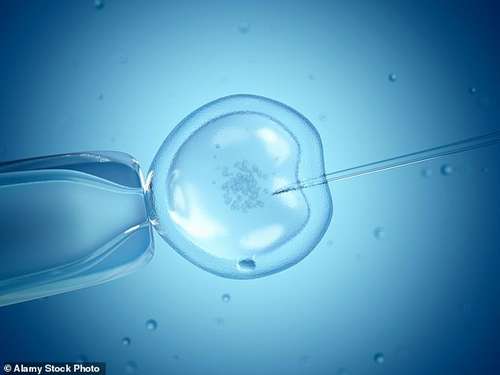 Fertility treatments include medicines to encourage regular ovulation, surgical procedures to repair fallopian tubes or scarring and assisted contraception, such as IVF.

More than eight in 10 couples conceive naturally within a year of trying.

Couples who have unsuccessfully been trying to conceive can access treatments on the NHS such as intrauterine insemination (IUI) — when sperm is inserted into a woman’s womb — and IVF, when a fertilised egg is inserted into the womb.

Around 390,000 babies in the UK have been born via IVF since 1991, while there have been more than a million in the US. The annual rate has tripled in the last three decades.

In the latest study, researchers examined health records of 266,925 naturally conceived Finnish children born between 1995 and 2000, as well as 13,757 who were born through IVF, IUI or ovulation induction.

The latter is when women are given fertility drugs to stimulate the follicles in their ovaries, causing them to produce multiple eggs in one cycle.

The study looked at their school and medical records by the age of 16 or 18.

The results, published in the European Journal of Population, show that compared to naturally born children, those conceived via assisted conception had a higher grade point average (8 vs 7.7), were less likely to drop out of school (2.4 per cent vs 3.6 per cent) and less likely to have left home by 18 (11 per cent vs 17 per cent).

However, the researchers noted that these differences between the two groups ‘mostly disappeared’ after family circumstances like their parents wealth, relationship status and education were taken into account.

Babies born though IVF are more likely to come from richer families who may provide their children with more money, time and emotional investment the benefits their education, they said.

Separate analysis showed that those conceived through assisted conception were 1 per cent more likely to suffer anxiety and depression.

Nine per cent of naturally conceived youngsters had a mental health diagnosis by their late teens, compared to 10 per cent among assisted conception.

The researchers said that while the finding is small as a percentage, it is significant.

Dr Hanna Remes, a researcher at the University of Helsinki and lead study author, said the team cannot yet explain this finding.

But she suggested that couples may suffer from depression and anxiety in response to their struggles conceiving, which puts their child ‘at higher risk of having mental health problems’.

Alternatively, parents who used assisted conception ‘may be more apprehensive about their child’s welfare’ and take them to visit the doctor or hospital more often — increasing their chance of being diagnosed with mental health problems, as well as other conditions.

The team noted that the oldest IVF child in the world is only 43-years-old, so research on this topic is ‘relatively new and unexplored’.

But due to the rise in assisted contraception, it is ‘vital’ to understand the long-term consequences on children and young people, they said.

Can you lose weight with an ‘anti-hunger’ pill?