Three children with a rare genetic kidney disease have each successfully received a breakthrough transplant operation that did not require the use of immunosuppressant drugs afterwards.

A team at Stanford University, in the Bay area, performed that operations three years ago on children who were suffering from Schimke immuno-osseous dysplasia (SIOD), a condition which inhibits a person’s ability to fights infections.

For this procedure, the children not only receive the organ but stem cell and bone marrow transplants from the same donor as well.

While these children are not yet cured from their condition, they are in a much healthier, safer, place now than they were before the operation, and they will not have to take the risks of using immunosuppressants.

The team that worked on these cases is hopeful that their findings from these three cases can help the 90,000 Americans that are currently awaiting a kidney transplant.

Kruz, 8, and Paizlee Davenport (pictured), 7, of Muscle Shoals, Alabama, were both born with the rare kidney disease SIOD 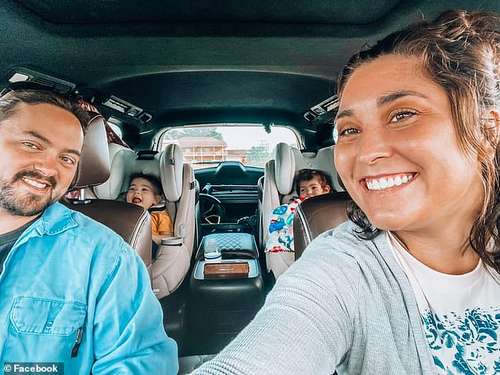 The pair of siblings received dual immune/solid organ transplants from their parents, in a breakthrough operation that doctors hope can be built on to help others with kidney diseases

Kruz, 8, and Paizlee Davenport, 7, of Muscle Shoals, Alabama, are siblings who both of SIOD – an extreme rarity for a condition where there are only around a dozen active cases worldwide.

Their parents brought them across the country to Stanford in 2019, NBC reports, hoping that the revolutionary treatment proposed by doctors at the world-renowned school could help their children.

Normal organ transplants can be hard to come by as matches can be rare and hard to find.

There is also the requirement to take immunosuppressant medication for as long as they have the foreign organ in their body.

There are risks that come with these meds, though, including high blood pressure, cancer and increased risk of suffering severe symptoms – and potentially death – from viral infections.

When the COVID-19 pandemic arose in early 2020, for example, people who had received organ transplants were considered a high risk group.

Not using these drugs will cause the immune system to recognize the foreign body, and attack it as a result.

The dual immune/solid organ transplant trains the body not to attack the organ by first transplanting stem cells to train it.

As a result, the kidney transplant can go through without need for immunosuppressant medications for the rest of the recipient’s life.

Both children are now living happy, healthy, lives despite still having SIOD, and do not require immunosuppressant medication

Both children received stem cell and organ donations from their parents, and the operations were successfully completed three years ago.

The operation does not come without risk and it is not a perfect fix, though.

While three years later, the operation has greatly improved the family’s quality of life, it has not quelled all concerns.

A simple kidney transplant is not enough to fully cure SIOD, and there is a possibility that the children may need another transplant once again at some point in their lives.

They were also not the first children to receive the operation, with those who had more unfortunate experiences before serving as a base for the Stanford team.

Five children with SIOD have previously been recorded to have received this type of operation.

Four of them died, though, either caused by the kidney itself attacking tissue in the body or because of toxic medications given to shut down the body’s immune system ahead of the operation.

Stanford doctors learned from those experiences, though. For this operation, they tweaked the dosages of the toxic drugs to tailor them to each child.

They also altered the implanted stem cells in a way that would prevent them from attacking the child’s immune system post-transplant.

Kruz and Paizlee are now living healthy, normal, lives without the need for immunosupressant drugs, a reality that seemed impossible only a few years ago.