Chicago will put a ‘special emphasis’ on warning Pride attendees of the risks of catching monkeypox this weekend, while San Francisco’s parade will be punctuated by regular announcements over the disease amid fears the events could spark an uptick in cases.

The Windy City’s Department of Public Health told DailyMail.com they would put out guidance on social media and print fliers to be handed out at events.

In San Francisco, California, which is also due to host a parade this Sunday, announcements will be made on ‘best practice‘ when in crowds.

America is gearing up to celebrate Pride this weekend in major cities —  with crowds expected to exceed two million in New York alone.

But it comes amid a growing outbreak of the rash-causing virus with 156 cases detected so far, many among gay and bisexual men, but no deaths. Several cases are not linked to international travel or other known infections suggesting it is already spreading undetected.

Although several cities are putting out warnings at Pride events, the national hotspot New York with 28 cases is yet to announce any plans to follow suit.

Last weekend doctors in Florida warned Pride attendees to avoid ‘prolonged’ skin-to-skin contact with others in clubs and bars in order to limit their exposure.

The above map shows states that have detected cases of monkeypox, and the tally by state. The red numbers show the change in cases over the last 24 hours

US boosts monkeypox testing in bid to speed diagnoses

The Biden administration has started shipping monkeypox tests to commercial laboratories, in a bid to speed diagnoses for suspected infections. 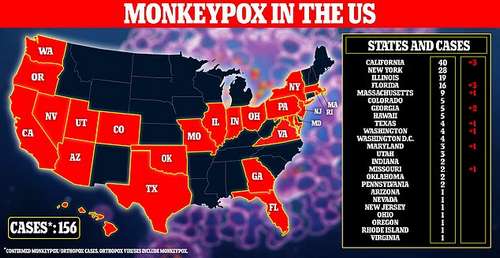 It said this would significant expand the nation’s capacity to test for monkeypox.

Previously, testing has largely been confined to public health labs, which combined have a capacity of about 8,000 tests per week.

‘All Americans should be concerned about monkeypox cases’, said Health and Human Services Secretary Xavier Becerra in a statement.

‘Thankfully we have right now the tools to fight and treat cases in America.

‘By dramatically expanding the number of testing locations throughout the country, we are making it possible for anyone who needs to be tested to do so.’

A spokesman for Chicago’s Department of Public Health (CDPH) said: ‘We will… continue to share facts about monkeypox and how to stay healthy on our social media channels throughout this weekend, with special emphasis on Pride-related events for the many people who will be taking part.

‘In addition, CDPH is printing palmcards with a link to a CDC page that provides health tips for gay and bisexual men and a scannable smartphone code for organizers to hand out at events where participants can get additional tips about remaining healthy.’

They added that the department had already created a template letter for event organizers to hand out on how to stay safe against monkeypox.

Chicago is expecting more than 100,000 people to flock to its Pride parade this Sunday.

San Francisco — which is set to host more than 500,000 people for its own parade — is also planning to put out warnings over monkeypox. 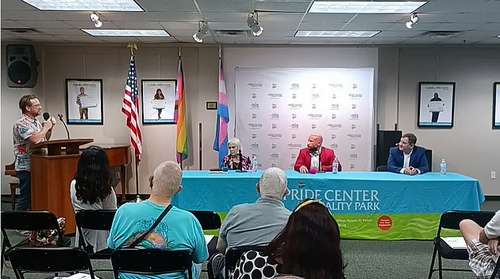 Its Pride organizers told DailyMail.com: ‘The Department of Health will be making public service announcements specific to monkeypox with best practices.

‘[This will be] as people gather, and together we are taking every precaution to ensure we are all able to have a safe and fun time during this year’s Pride celebrations.’

But New York City health officials — who could be hosting as many as two million people this weekend — are yet to announce any plans to warn people over monkeypox.

When contacted, the city’s Department of Health directed DailyMail.com to a guidance page on its website.

This told people who felt unwell to avoid ‘clubs, parties or gatherings’, and not to have sex or close physical contact if they or their partner are sick.

Monkeypox — native to West Africa — has now been detected more than 3,000 times across 40 countries where it is not typically found.

No deaths have been recorded, but health officials warn it could spill over into more vulnerable populations if the outbreak is not contained.

The doctors warned people to avoid skin-to-skin contact that is prolonged during a briefing yesterday. Pictured above from left to right is Dr Margaret Gorensek, an infectious disease expert at Holy Cross Medical Group, Dr Zachary Henry, a sexual health expert at AIDS Healthcare Foundation, and Dr Frank Vittimberga, the chief medical officer for the Florida Medical Center

The tropical disease is primarily spread through physical contact with infectious rashes, but in rare cases it can also be transmitted through ‘sustained’ face-to-face contact.

Many patients have rashes on their genital area and anus as a first warning sign, before the disease spreads to the rest of the body.

It can take up to four weeks to get better from the disease, with most cases being mild and clearing up on their own.

Someone remains infectious until their rashes have scabbed over and eventually fallen off.

Last week doctors in Florida said Pride attendees should avoid ‘prolonged’ skin-to-skin contact in clubs and bars in order not to catch monkeypox.

Speaking at a briefing ahead of celebrations in Fort Lauderdale, Dr Zachary Henry — who spotted a case of monkeypox in his clinic — also warned people to stay away from others with unusual rashes.

The sexual health expert at the AIDS Healthcare Foundation added there was no need to wear face masks because the tropical disease took ‘hours’ to spread through the air between people.

Henry — appearing with Dr Margaret Gorensek — was speaking ahead of a Pride march in Fort Lauderdale, Florida, last Saturday which could draw more than 100,000 spectators.

Tests show FIVE products do not live up to SPF claims