Covid lockdowns didn’t make us fatter, researchers now say. Instead, academics claim society’s waistline may have bulged less than expected during the pandemic.

In the year before the virus struck, people gained an average of 280g (9.9oz).

But adults only gained an extra 90g (3.2oz) during Covid’s first twelve months, the study suggested.

Experts say their findings, based on 100,00 people in the US, dismiss concerns that shutdown orders only worsened the obesity crisis.

Obesity rates have been spiraling upwards over the past few decades because of junk food diets and sedentary lifestyles. 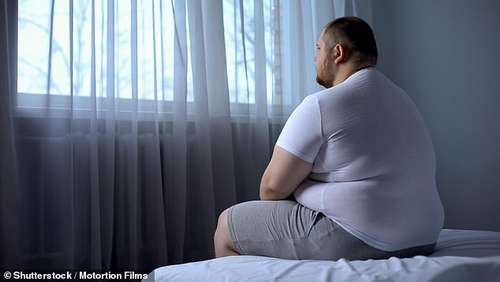 Spiralling child obesity levels has sparked a huge rise in the number with type 2 diabetes, according to a charity.

Diabetes UK today called the 57 per cent uptick, spotted over the past five years, ‘concerning’.

It accused the Government of ‘letting our children down’ as it called for concerted action to tackle Britain’s bulging waistline.

And Diabetes UK warned the cost of living crisis could lead to further problems in years to come.

Experts described the mix of soaring obesity levels and squeeze on finances as a ‘perfect storm which risks irreversible harm to the health of young people’.

One Public Health England study last year claimed more than 40 per cent of adults in England piled on the pandemic pounds, with the average weight gain being 7lbs (3kg).

Gorging on unhealthy comfort food to deal with pandemic stress and stay-at-home orders were blamed.

It sparked health chiefs to recommend a summer fitness drive.

Academics from Miriam Hospital’s Weight Control and Diabetes Research Center in Rhode Island examined the records of 102,889 adults, who were in their fifties and obese, on average.

They recorded the weight and body-mass-index (BMI) of the participants twice in the year prior to the first US lockdowns, in March 2020.

Matching information was logged between April and November 2021, in order to see the effects of Covid curbs. 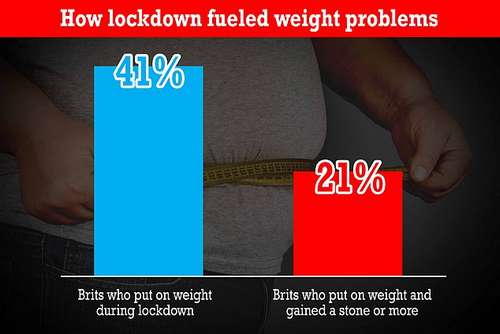 The average time between the weight measurements for both spells was two-and-a-half months.

Initial findings showed people gained 220g (7.8oz) in the period after lockdown. By comparison, they gained 180g (6.3oz) before Covid.

The difference between these two figures was not considered significant, meaning the researchers couldn’t say lockdowns fuelled weight gain.

But when looking at 83,678 participants who had their weight measured in person, the results changed.

In this group of participants, people gained triple the amount of weight in the spell before lockdown as they did to after.

The study, published in JAMA Network Open, does not definitively prove that Covid lockdowns didn’t make us fatter, however.

It failed to look at how diets or physical activity levels changed during the pandemic.

Obesity became a prominent topic in the virus outbreak, with real world data proving fatter people were more at risk.

A study by the now defunct Public Health England found 41 per cent of Britons put on weight during lockdown, with the average gain being half a stone. But 21 per cent of those who put on weight gained a stone or more since March 2020

It sparked calls to get people to eat healthier and exercise more.

Official data shows two-thirds of British adults are too fat and an analysis by Cancer Research UK last month predicted the toll will surpass the 70 per cent figure in the next two decades.

In the US an estimated 73.6 per cent of adults are considered either overweight or obese.

Being overweight or obese is known to increase the risk of at least 13 different types of cancer and also causes other dangerous health conditions such as high blood pressure and type 2 diabetes.

Upgraded Covid Shots Are Coming. Will They Be Too Late?

They Were Cigarette Smokers. Then a Stroke Vanquished Their Addiction