Members of the British Medical Association (BMA) have asked their union to lobby ministers for a massive pay hike over the next five years. They believe doctors have been shortchanged by ‘millions’ in real terms since 2008 due to inflation. NHS doctors and GPs will push for a whopping 30 per cent pay rise, it was decided today.

Doctors said they were prepared to join ‘picket lines’ to achieve pay restoration and admitted that industrial action was ‘likely’.

Members voted in favour of the motion at the BMA’s annual meeting in Brighton. The union will now be mandated to push for the salary increase for all doctors, including GPs who make £100,000 per year, on average.

So far ministers have ruled out bowing to unions on pay, arguing that broad salary rises would only add fuel to Britain’s spiralling inflation.

The Treasury has told public sector workers they should instead expect rises around the 3 per cent mark.

It comes as criminal law barristers walked off the job today demanding a 15 per cent pay rise and follows last week’s disruptive rail strikes — dubbed the worst since the 1970s — which brought the nation to a standstill.

Teachers unions and the civil service are also being balloted on potential industrial action to add to Britain’s ‘Summer of Discontent’.

It follows threats of strike action from junior doctors this winter if the Government fails to offer them a similar pay rise of 22 per cent. 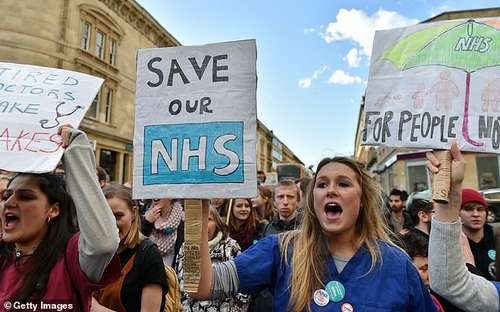 Other grumbles of discontent are coming from the Royal College of Nursing who are seeking an inflation busting pay rise of 14 per cent.

Dr Emma Runswick, from the BMA’s Manchester and Salford division, said inflation, which is currently at about 9 per cent but predicted to rise further, essentially meant doctors were essentially working for free due to a lack of a pay increase.

MANCHESTER: Two barristers became emotional after listening to speeches during a protest over funding outside Manchester Crown Court today

LONDON: CBA chairman Jo Sidhu QC (pictured) spoke to the crowds as he said that barristers are the ‘poor persons of the justice system’

EUSTON STATION: RMT Union boss Mick Lynch on the picket as he vowed to shut down transport in every town and city over pay last week

What happened the last time junior doctors went on strike?

Junior doctors planning to strike later this year echoes that of similar industrial action back in 2016.

The dispute was regarding plans to scarp overtime rates for junior doctors on every day except Sunday and instead increasing pay.

But many junior doctors felt the change would result in a net loss.

The dispute resulted in a general strike on January 12, the first such industrial action in 40 years. 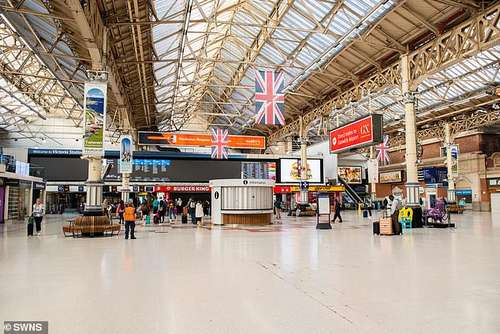 On April 26-27 junior doctors withdrew from providing both routine and emergency care, the first time this had ever happened.

In total the strikes led to the cancellation of 100,000  patient appointments.

The dispute only formally ended in 2019 when junior doctors were offered an 8.2 per cent pay rise over four years.

‘We should not wait for things to get worse, all of us deserve comfort and pleasure in our lives.’

She added doctors were under no illusions that winning such a pay rise would be easy, and that industrial action would have to be on the cards.

‘It won’t be easy to win,’ she said. ‘It’s likely that industrial action will be required.’

Dr Runswick said such action was needed if the profession wanted to stop the NHS hemorrhaging doctors.

‘If we do nothing we will see pay halved, doctors in financial difficulty, demoralised and leaving,’ she said. ‘We are worth more, you are worth more.’

Critics have previously described the BMA union as being ‘militant’.

Dr Joanna Sutton-Klein, who spoke in support of the motion, said those who thought a 30 per cent pay rise was ‘outrageous’ were wrong.

‘Some people might think the demand for full pay restoration is too high, some might even think it is outrageous,’ she said.

‘It is outrageous our pay has been cut by 30 per cent, it is outrageous that while our pay continues to be cut our wages are being siphoned to growing numbers of overpaid managers and the £37billion failed Test and trace programme.

‘It is outrageous that doctors today are unable to afford mortgages and are delaying starting families due to our falling pay.’

She even went so far as to hint doctors may strike similar to rail unions to achieve their goals.

‘We working people are paying the cost of the inflation crisis while the richest in this country are continuing to horde obscene levels of wealth,’ she said.

‘All around us train unions are coming together and winning big. Vote for this motion and I’ll see you on the picket lines.’

Her comments were followed by applause and cheering from delegates at the conference.

Although the motion was for 30 per cent pay restoration within the next five years some doctors said this wasn’t soon enough and demanded it happen this year.

In response, BMA council chair Dr Chaand Nagpaul, highlighted the motion said ‘within’ this period meaning it could be resolved sooner.

Responding to the  result of the vote, Dr Vishal Sharma, chair of the BMA consultants committee, said it was clear members would no longer accept Government inaction on pay.

‘The Government has it within its’ gift to solve these issues and avoid any disputes with the profession’ he said.

‘If they fail to do this, the BMA will need to support members in order to restore their pay.’

The latest NHS data shows there is a shortage of 8,000 medical doctors in England as of March this year. This includes doctors that work in hospitals in areas like emergency departments and specialists like oncologists that treat cancer.

NHS England has also lost the equivalent of 2,000 full-time GPs since 2015 and there are now an average of 2,200 patients per family doctor.

Additionally, a snapshot poll of GPs earlier this month suggested that half of family doctors plan to retire by the age of 60.

The Royal College of GPs said almost half of family doctors are planning to quit by 2027 in a major threat to patient care.

It insists general practice is ‘significantly under-staffed, under-funded and overworked’, leaving the service and profession ‘in crisis’.

In comes over increasing concerns about the availability of family doctors, who earn an average of £100,000 per year, with many Britons struggling to see their GP face-to-face similar to pre-pandemic.

If doctors do opt for industrial action, it will be the first time since the junior doctors strike in 2016.

A dispute with then health secretary Jeremy Hunt over changes to junior doctors’ contracts was the first time in 40 years that England’s medics had taken to the picket lines.

Responding to the BMA vote a Department of Health and Social Care spokesperson said the Government was already acting on NHS pay.

‘NHS staff received a 3 per cent pay rise last year, despite a public sector pay freeze, and in 2019 the government and the BMA agreed to a multi-year pay deal for doctors in training, which guaranteed an 8.2% rise in pay over four years,’ they said.

‘We are giving NHS workers another pay rise this year -no decisions have been made and we will carefully consider the recommendations from the independent pay review bodies.’

Who else is set to join the summer strike contagion?

Strikes could spread across the economy in the coming months. These are the areas affected – and those which could be hit – and the unions behind the ballots.

Strikes by the RMT across three days last week closed half of the country’s rail network and reduced service to a fifth of normal levels.

The Transport Salaried Staffs’ Association (TSSA) is also balloting thousands of staff at Network Rail and several train companies, with the possibility of strikes as soon as July.

The train drivers’ union Aslef is set to strike at Greater Anglia and the Croydon Tramlink in the coming weeks.

Unite is also balloting about 500 British Airways check-in staff at Heathrow over a refusal to reverse a 10 per cent pandemic pay cut. If workers vote in favour, strikes are likely in July – potentially ruining some summer holidays.

Teachers’ union NAS/UWT will ballot members over action unless the Government backs demands for a 12 per cent pay rise. A pay award for 2022/23 is due in November.

The National Education Union has said it will ballot its 460,000 members if a pay rise in line with inflation is not offered by the Government.

Unison, which represents NHS staff, has said strikes are possible unless the annual pay offer for them is not close to the rate of inflation. The British Medical Association, which represents doctors, has also said it will prepare for a ballot unless junior doctors are given a 22 per cent ‘restorative’ pay rise.

The Royal College of Nursing has also demanded a pay rise of 5 per cent above inflation.

The Public and Commercial Services Union, which represents civil service workers, will hold a ballot in September over pay, pensions and redundancies.

The Unison, GMB and Unite unions have said local government staff in England, Wales and Northern Ireland should receive a pay increase of at least £2,000 each. Workers include rubbish collectors, library staff, teaching assistants and care workers.

Unite said it will support ‘any action’ by workers to achieve a pay rise.

The Communication Workers Union will ballot Royal Mail workers in a dispute over a pay rise offer of 2 per cent.

The union has also sent ballot papers to BT workers including engineers, contact centre staff and retail employees over pay. It could result in the first strike at the company since it was privatised in the mid-1980s.

For some commuters hit by rising fuel costs and rail strikes, it is the glimmer of a silver lining.

This month traffic wardens will start a seven-day strike in protest at pay cuts and ‘fire and rehire’ tactics.

The walkout in Wiltshire means penalty charge notices will not be issued and charges in council car parks will not be enforced, costing £30,000 in revenue.

The action by the GMB from June 30 to July 6 follows two days of strikes in the county in May.

The union is opposing a pay cut of 10 per cent, or £2,000 a year, for traffic wardens, and said members were ‘at the end of their tether’.

Wiltshire Council is seeking to save £800,000 annually by ending contractual unsocial hours payments for almost 350 staff, including social workers and care workers.