The Environmental Protection Agency (EPA) is warning that many chemicals on household goods and in drinking water are more dangerous that previously believed, potentially putting Americans at risk of many chronic diseases.

The agency issued an advisory Wednesday regarding per- and polyfluoroalkyl substances (PFAS) – also known as ‘forever chemicals’ – and saying they are dangerous at levels thousands of times smaller than what previous guidelines had indicated.

These chemicals used to be found in a large portion of household goods, but have since been phased out by many manufacturers. Officials fear their impact may linger forever, though, hence the moniker.

Kidney and liver problems, fertility issues, diabetes, obesity and even cancer have all been tied to dangerous level of exposure to these chemicals.

‘Forever chemicals’ that are found on many older household products, especially ones with non-stick properties, are more dangerous than regulators had previously believed, according to a new EPA report (file photo)

‘People on the front-lines of PFAS contamination have suffered for far too long,’ Michael Regan, administrator of the EPA, said in a statement. 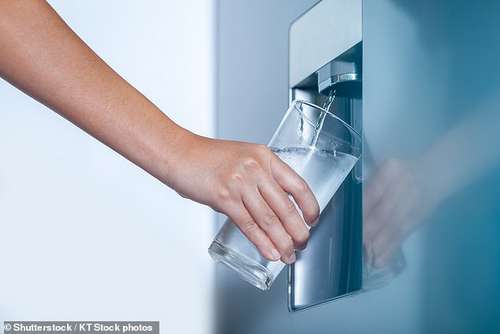 ‘That’s why EPA is taking aggressive action as part of a whole-of-government approach to prevent these chemicals from entering the environment and to help protect concerned families from this pervasive challenge.’

As per the new guidance, the EPA no longer recommends drinking water with more than 0.004 parts per trillion (ppt) of PFOA and 0.02 ppt of PFOS.

Previous guidance had a maximum recommended amount of ppt at 70, a massive shift by America’s top environmental agency.

While small amounts of the chemicals are safe, they can linger in person’s internal systems for long periods of time.

Repeated exposure throughout a person’s life can eventually cause a variety of chronic health issues.

Experts have long known that the chemicals were lingering on many household products, but were allowed as long as they were beneath what was deemed acceptable levels.

The EPA now says that the previous acceptable levels were way too high, and significantly reduced them.

The chemicals became popular is manufacturing decades ago, CNN reports, for their ability to repel oil and water in goods. They are included in non-stick material, clothes, carpets, cleaners and other common household goods.

‘Most uses of PFOA and PFOS were voluntarily phased out by U.S. manufacturers, although there are a limited number of ongoing uses, and these chemicals remain in the environment due to their lack of degradation,’ the agency wrote in a statement.

In recent years, U.S. manufacturers have made an effort to phase them out of food packaging, but many imported goods still use them.

The EPA warns that previous changes are not enough, and that based on currently available technology, they may not be able to detect trace amounts of the chemicals that still pose a danger.

‘The updated advisory levels, which are based on new science and consider lifetime exposure, indicate that some negative health effects may occur with concentrations of PFOA or PFOS in water that are near zero and below EPA’s ability to detect at this time,’ the agency wrote.

Recommendations by the EPA are not binding, and they can not force any other government agency of locality to follow their rules.

Still, though, many will listen to the EPA when it comes to setting guidance on how to keep drinking water clean and how to regulate manufacturing.

The agency  is making one billion available to localities that plan to make adjustments in their water distribution to prevent the spread of the chemicals.

These chemicals are not the only potential harm lingering in American drinking water.

Data revealed earlier this year by the EPA showed that more than two-thirds of U.S. drinking water contains uranium.