Sir Jonathan Van-Tam — one of Britain’s top Covid doctors — today revealed he is no longer wearing a face mask.

The newly-knighted scientist also dismissed hysteria that a recent uptick in Covid cases marks a new wave of the pandemic, saying Britain has to learn to live the virus.

Sir Jonathan’s comments come after Covid infections jumped 40 per cent over the past fortnight in England and there has been a slight uptick in hospital admissions.

The outbreak has been fuelled by the spread of two new Omicron sub-variants BA.4 and BA.5, which are more infectious but just as mild as the parent strain.

It has prompted left-leaning scientists to call for a return of mask-wearing and for Britons to only meet outside because of the uptick in infections.

But Sir Jonathan told the BBC Today programme there was nothing alarmist about these figures and revealed he has stopped wearing a mask in the vast majority of settings.

‘I don’t wear a face covering,’ he said.

The former deputy chief medical officer added he would now only wear a mask if he felt the environment was particularly risky for Covid, and that this was something other people should consider as well.

‘But if there were circumstances where I felt it was a really closed environment with very high crowding and very intense social interaction then those are the situations where I might think ‘should I or shouldn’t I?’,’ he said. 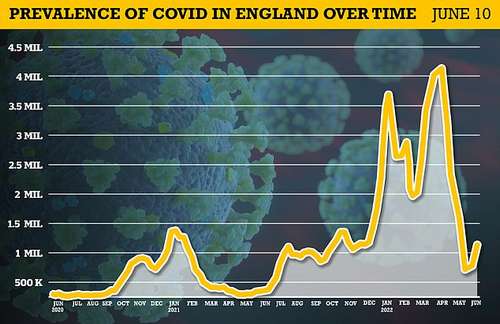 ‘I think people have got to learn to frame those risks for themselves.’

Asked about the latest figures from the Office for National Statistics (ONS), which estimated about 2 per cent were infected with Covid in the week to June 11, Sir Johnathan said the current data showed there was no reason to panic.

‘It is an uptick but it is really very small still in relation to the kind of peaks that we saw in January and April,’ he said.

‘The hospitalisation signal most importantly is very small indeed.

‘At the moment there is nothing alarmist in these figures.’

Members of Independent SAGE, a pressure group that previously called for a zero-Covid policy, last week called for a return to wearing masks indoors and meeting outdoors in response to rising Covid rates.

But Sir Jonathan said it is hospitalisation, intensive care admissions and deaths that are the true metric of if the Covid situation warrants further concern.

These have yet to spark concern.

Daily Covid admissions in England surpassed 1,000 for the first time in months this week.

But this is still about half the level in spring, when cases soared to record highs.

However, just a third of patients are primarily ill with the virus. The majority have just incidentally tested positive.

‘The data still show that although when cases go up hospitalisations go up the proportion of people requiring hospitalisation is way, way, way lower than when Covid first appeared on the scene,’ Sir Jonathan said. 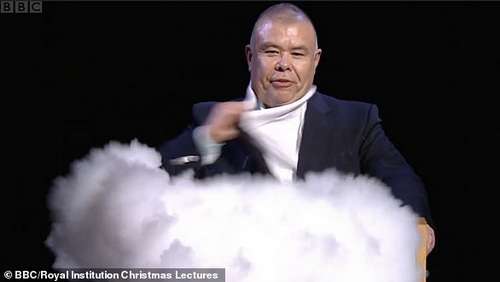 ‘That is because of vaccination and to a smaller extent acquired immunity as we’ve caught Covid in the interim.’

He added that the country had to learn to live with the virus similar to the other winter bugs it now resembled.

‘We just accept that in the winter that if you’ve got seasonal flu and you’re poorly for a few days it disrupts your life,’ he said.

‘We’ve got to start frame Covid a little more in those terms to be truthful.’

While fresh ONS data on Covid prevalence is due out today, the latest figures indicate one in 50 people in England were infected in the week to June 11, roughly 1.1million.

Covid cases have surged by 40 per cent in England in what some have claimed to be the start of a fresh wave of the virus, official figures show. The Office for National Statistics (ONS) estimates 1.13million people were infected on any given day in the week ending June 10, the equivalent of one in 50 of the population. That figure is up 42 per cent on the previous week

Covid vaccines saved almost 20million lives during the first year of their existence, according to estimates.

British grandmother Maggie Keenan became the first person in the world to get an approved jab on December 8, 2020.

Pfizer’s rapid discovery of an effective vaccine, and the later roll-out of jabs made by AstraZeneca, Moderna and others, paved the way out of the pandemic.

Now a team of researchers have calculated the benefits of the jabs, estimating they saved 19.8million lives across 185 countries within the first 12 months of being used.

They found a further 7.5million lives were saved in countries covered by the Covid-19 Vaccine Access initiative (Covax), designed to provide jabs to poorer nations.

Yet the academics also found a further 600,000 deaths could have been prevented had the World Health Organization’s (WHO) target of vaccinating 40 per cent of the population in every country by the end of 2021 been met.

The majority of the preventable deaths, as they were branded, were in Africa.

Some commentators have blamed Queen’s Platinum Jubilee celebrations over the bank holiday weekend, which saw millions across the country gather for street parties and 22,000 attend a concert at Buckingham Palace.

Others have pinned Britain’s Covid resurgence on people wrongly assuming they just have hay fever.

Coughing, sneezing and a runny nose are now all tell-tale signs of the coronavirus, which has become milder as the pandemic has worn on.

But they are also symptoms which plague the lives of millions of hay fever sufferers when pollen levels begin to shoot upwards, like they have over the past fortnight.

The recent spike in Covid cases did prompt the NHS to urge eligible Britons to come forward for their Spring booster.

Health chiefs have asked a million eligible older Britons to get their fourth dose this month, so they have the necessary time between jabs ahead of an autumn booster.

Multiple experts have warned cases of the virus — which many believe is morphing into another cause of the common cold — will continue to periodically flare-up.

Government data shows the number of admissions rose 24 per cent over the last week.

On average around 900 Brits are being admitted and testing positive each day.

The number of ventilator beds occupied with infected patients has remained reactively stable at under 200, about 23 times lower than the levels seen during the darkest days of the pandemic.

Sir Jonathan, 57, announced his departure from public office in January this year during the height of Boris Johnson’s ‘partygate’ scandal, returning to academic work at the University of Nottingham in May

He was knighted for his service to the nation during the pandemic but ironically had to miss the ceremony last month after testing positive for the virus.

A straight-talking voice of calm, JVT shot to fame in the early stages of the pandemic for his use of football-related metaphors to explain complex science.

He has fronted many Downing Street press conferences, attracting a legion of fans who have bought T-shirts with his face and phrases emblazoned across the front.

JVT, a fan of Boston United, likened the vaccination programme to defensive football players whose job it was to ‘watch everybody’s back’.

At a Downing Street press conference he said: ‘A bit like a football game where the strikers who score the wonder goals are the ones who make the headlines, actually, the hard yards are done by the defenders and by the defensive midfielders tracking back, tracking back for 90 minutes of the whole game, watching everybody’s back.

‘This is what it’s going to be about now, tracking back and making sure that we finish the job properly in the phase one cohorts before we move on.’

He compared the pandemic to the Aintree horse race when he warned Britain could not fall at the final fence.

‘The vaccine effects are going to take three months until we see them properly, and until then no-one can relax,’ he told The Sun.

‘We are probably in the last few furlongs of this race – like in the Grand National. We just have a couple more fences, we have just got to stick with it.’

Football is a common tool used by JVT to explain Britain’s progress through the coronavirus pandemic.

He once described the development of the Pfizer vaccine to reaching the penalties at the end of the play-off final.

‘So this is like… getting to the end of the play-off final, it’s gone to penalties, the first player goes up and scores a goal.

‘You haven’t won the cup yet, but what it does is, it tells you that the goalkeeper can be beaten.’

The progress of the vaccine rollout has been compared to different forms of transport, including a plane coming in to land.

JVT said: ‘Do I believe that we are now on the glide path to landing this plane? Yes I do.

‘Do I accept that sometimes when you are on the glide path, you can have a side wind and the landing is not totally straightforward, totally textbook? Of course.’

JVT said the pandemic was like waiting on a platform for a train, with the lights ‘a long way off’.

He said: ‘This to me is like a train journey, it’s wet, it’s windy, it’s horrible.

‘Two miles down the tracks, two lights appear and it’s the train and it’s a long way off and we’re at that point at the moment. That’s the efficacy result.

‘Then we hope the train slows down safely to get into the station, that’s the safety data, and then the train stops.

‘And at that point, the doors don’t open, the guard has to make sure it’s safe to open the doors. That’s the MHRA, that’s the regulator.’

He said the train was the vaccine, and he hoped when it was ready there would not be ‘an unholy scramble for the seats’.

‘The JCVI has very clearly said which people need the seats most and they are the ones who should get on the train first.’

JVT said Britons needed to avoid getting a ‘red card’ from the Omicron coronavirus variant by getting a booster jab.

He said: ‘Omicron is like now picking up a couple of yellow cards to key players on top. We may be OK but we’re kind of starting to feel at risk that we might go down to 10 players and if that happens – or it’s a risk that’s going to happen – then we need everyone on the pitch to up their game in the meantime.

When explaining the extreme temperature the coronavirus vaccine must be stored at, JVT said it was not like a yogurt.

He added: ‘This is a complex product. It’s not a yoghurt that can be taken out of the fridge and put back in multiple times.’

And other famous moments…

When he ripped off his shirt

The professor proceeded to rip off his shirt and tie, disappearing into a cloud of smoke

Professor Van-Tam was hosting the Royal Institution Christmas Lectures on BBC Four when he ripped off his shirt and tie, disappeared into a cloud of smoke – and reemerged in slightly less formal attire, wearing a more casual blue shirt underneath his jacket.

When he dealt calmly with an anti-vaxxer

JVT stayed completely calm and responded politely to an anti-vaxxer who screamed abuse at him in Westminster last June.

Geza Tarjanyi, 60, of Leyland, Lancashire, targeted the Deputy Chief Medical Officer as he walked into the Ministry of Defence building.

He said: ‘Are you Van-Tam, aren’t ya? What was really in that needle that you put into Matt Hancock? Why are you continually lying to the British people? Why are you smiling? This country’s supposed to be in the worst pandemic of all time.’

Professor Van-Tam politely replied: ‘It is.’ And when, following another torrent of abuse, the anti-vaxxer asked JVT if he was listening, the expert said: ‘What? I’m finding it difficult.’

Marijuana users are 22% more likely to visit and emergency department