Altruism in old age may not be a sign of generosity later in life, but instead a warning that a loved one is suffering from dementia, a new study finds.

Researchers from the University of Southern California (USC), in Los Angeles, found that elderly people that were more willing to give away money to a person they do not know perform worse of cognitive exams and are more at risk for Alzheimer’s.

The research connects the generally lauded behavior of altruism to a serious medical condition, and could serve as a warning to some caretakers.

Elderly people have long been known to be more vulnerable to scams and plots to extract money from them because of their declined mental state, but this study shows that even positive examples could signal some danger.

‘Trouble handling money is thought to be one of the early signs of Alzheimer’s disease, and this finding supports that notion,’ Dr Duke Han, a neuropsychology professor at USC who led the research, said in a statement.

Researchers, who published their findings in the Journal of Alzheimer’s Disease, gathered 67 elderly adults around the age of 70 for the study.

Each participant was ten paired with another person they had never met before in a lab environment, and handed ten dollars to distribute between themselves and the other.

‘To our knowledge, this is the first study to explore the relationship using a behavioral economics paradigm, meaning a scenario where participants had to make decisions about giving or keeping actual money,’ Dr Gali Weissberger, a lead researcher from Bar-Ilan University in Israel, said. 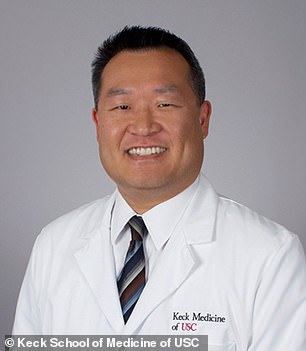 The elderly participants were also given neurological tests to judge their current cognitive state and their potential risk of developing Alzheimer’s.

Researchers found that those who were willing to give more money to a person they had never met before were also often in a worse cognitive state and tested higher for Alzheimer’s risk.

‘Findings of this study point to a negative relationship between financial altruism and cognitive functioning in older adults on measures known to be sensitive to Alzheimer’s disease,’ researchers wrote in the study.

Dr Duke Han (pictured), a neuropsychology professor at USC, said that trouble properly handling money could be an early sign of Alzheimer’s

Researchers warn that people should be on the lookout for these sudden changes of behavior, and not just assume that their loved one has suddenly become more generous in older age.

Han makes sure to say that giving away money is not a bad thing, though, and some may choose to just be more generous as they get older.

‘The last thing we would want is for people to think that financial altruism among older adults is a bad thing… it can certainly be a deliberate and positive use of a person’s money,’ he said.

This study is fairly small, and researchers want to further explore the link between cognitive decline and increased generousness.

The elderly are known to be prime targets of financial scams, partly because they may not be as sharp witted as they were in their younger years.

Some also report that the loneliness and isolation suffered by some makes them more at risk.

Many elderly people are also removed from their finances and may lose track of how much money they really have, because their family or a caretaker may gain control over their accounts later in life.

An estimated $3 billion is stolen from elderly Americans by scammers every year, according to data compiled by the U.S. senate.

More than 11,000 digestive tract cancer fatalities could be protected against by simply reinviting individuals

Do you really need a gynecologist?