Moderna released preliminary results on Wednesday on an updated coronavirus vaccine that targets the Omicron variant, calling it “our lead candidate” to serve as a U.S. booster shot in the fall.

The firm’s researchers tested a booster dose combining the original vaccine with one that specifically targeted Omicron, the variant that became dominant last winter. They found that among those with no evidence of prior coronavirus infection, the combination produced 1.75 times the level of neutralizing antibodies against Omicron as the existing Moderna vaccine did alone.

While those results may seem encouraging on their face, many experts worry that the virus is evolving so quickly that it is outpacing the ability to modify vaccines, at least as long as the United States relies on human clinical trials for results.

Moderna’s new findings, from a clinical trial involving 814 volunteers, indicate that the updated vaccine produced a significantly stronger immune response against Omicron than the existing vaccine a month after the booster shot was given. The booster shots followed three earlier doses of Moderna’s vaccine.

But Omicron has been spawning subvariants for months, and some vaccine experts say that what matters now is how well a new booster formulation would protect against the latest subvariants, BA.4 and BA.5, not Omicron itself. First detected in South Africa early this year, those two subvariants now account for 13 percent of new cases in the United States, and are spreading fast. By some estimates, within a month they could outcompete two other Omicron subvariants, BA.2 and BA.2.12.1, which are dominant at present.

Moderna did not release any data on how the updated vaccine worked against BA.4 or BA.5. In a presentation Wednesday morning, Dr. Stephen Hoge, the firm’s president, said that researchers were still gathering data on those and other subvariants.

But he said that a very small sample, together with isolated other studies, suggested that the levels of neutralizing antibodies triggered by the updated vaccine were two to threefold lower against the BA.4 and BA.5 subvariants, compared to those triggered against Omicron. But he said those levels were “still a very comfortable place,” a view echoed by at least one federal health official who has reviewed the data. 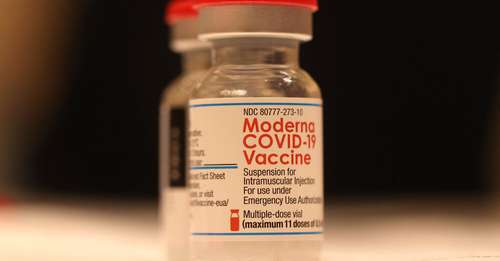 Moderna officials said they could not say yet whether the reconfigured vaccine will offer more lasting protection than the existing one, but they were hopeful it would, based on earlier findings from a study of a vaccine reconfigured against a different variant, released in April.

The newest subvariants seem to spread even more quickly than earlier versions of Omicron, and may be better at dodging the immune system’s defenses. It is unclear whether they cause more severe disease. Dr. Anthony S. Fauci, the chief medical adviser to the White House, said in an interview on Tuesday that South Africa, where BA.4 and BA.5 have been widespread, had “seen a slight uptick in hospitalizations, but I.C.U. utilization and deaths are really staying stably low.”

In any case, given how fast the virus is mutating, some vaccine experts say it makes more sense to target its most recent versions, rather than forms of the virus that have already been overtaken, or soon will be.

The problem is that Moderna and Pfizer — the maker of the other main coronavirus vaccine in the United States — do not have enough time now to run more human clinical trials and still manufacture shots before the fall, when the Biden administration is hoping to be able to offer an updated vaccine to counter what public health experts predict will be a winter surge.

That might force regulators to choose updated vaccines based on data from laboratory tests and trials involving mice or other animals, rather than robust human trials. It is also possible that another new variant or subvariant of concern will appear by the fall, further complicating the picture.

Outside advisers to the Food and Drug Administration are scheduled to meet June 28 to discuss which vaccine formulation would work best as a fall booster; vaccine manufacturers have said they would need to start production soon.

“Of course, the final decision is always left to the F.D.A.,” Dr. Fauci said. “But what the F.D.A. will likely do is keep as many irons on the fire as they possibly can. And they may need to revert to alternative pathways of decision, which are laboratory data and possible animal data.”

Asked if Americans would accept a booster formulation without lengthy human trials, he said, “People who really are very concerned about protecting themselves will.”

John Moore, a virologist at Weill Cornell Medicine in New York, said many health care professionals would be comfortable at this point in the pandemic switching to a different model for coronavirus vaccine development, more like the one used to modify the flu vaccine every year. Federal health officials said that the composition of the annual flu vaccine is changed to meet new variants with minimal new human tests.

Moderna’s trial of the vaccine targeting Omicron began in late February. The average age of the participants was 57. All volunteers had received three shots of Moderna’s existing vaccine — two shots, followed by a booster dose given an average of eight months after the second shot.

About four and a half months after that first booster, 377 volunteers received a second booster with the existing vaccine, while 437 received the booster designed to work against Omicron. The updated booster produced a stronger immune response among both those who had previously been infected with the virus and those who had not.

Antibodies are the body’s first line of defense in warding off infection from the coronavirus. Other immune responses that also defend against Covid-19 were not measured; those tests are far more complex and time-consuming to conduct.

Dr. Paul Burton, Moderna’s chief medical officer, described the results as highly encouraging. “We really feel like this is a sort of fundamental turning point in our fight against this virus — that we can adapt to a variant,” he said.

But Dr. Moore said that a less than twofold increase in neutralizing antibodies over the existing vaccine is “only a modest benefit.”

“Does that justify switching vaccine composition, given the cost and the logistics and everything else that’s involved?” he asked. “That’s what the argument is going to be about.”

Pfizer and BioNTech, its German partner, are also testing an Omicron-specific vaccine and are expected to release their results soon.

In April, Moderna released preliminary results on a vaccine retooled to attack the Beta variant, which was first detected in late 2020. That version of the vaccine, the firm said, triggered a stronger immune response than the initial formulation not only against Beta, but also against the Delta and Omicron variants. Although Moderna officials said the added protection against Omicron persisted for six months, they said that they expected an Omicron-specific vaccine would be a better candidate.

Covid is not to blame for mysterious hepatitis outbreak in children