America’s monkeypox cases have surged by a record 63 in just one day after the Biden administration unveiled plans to roll out tens of thousands of vaccines against the tropical disease.

Data from the Centers for Disease Control and Prevention (CDC) revealed the sharp rise on Tuesday — up 260 percent on 28 from the previous week — which took the nation’s cumulative tally to 306 infections.

New York — the national hotspot — saw the sharpest rise in patients with the rash-causing virus up 26 in a day, followed by Illinois where they rose by 18.

The surge is unlikely to have been caused by the weekend’s Pride celebrations because it takes more than a week for infected people to show symptoms and then get a test. Previous Pride month events may have played a role, though.

The jump could be a result of increased surveillance, though. Last week the CDC ramped up monkeypox testing by sending thousands of kits to commercial laboratories around the U.S.

It comes after the Biden administration revealed it has made 56,000 doses of the Jynneous vaccine — which can work against monkeypox — available to states. It will be releasing another 240,000 jabs in the coming weeks.

The vaccines are ear-marked for monkeypox patients, their close contacts, and gay or bisexual men who have multiple sexual partners over a fortnight or visited a venue such as a club where a case of the tropical disease was later detected.

But critics say there are not enough doses, and have slammed the Food and Drug Administration (FDA) for taking ‘too long’ to inspect a factory in Denmark where the U.S. has a million vaccines waiting in limbo. The jabs can only come to the country once the factory is approved by the FDA. 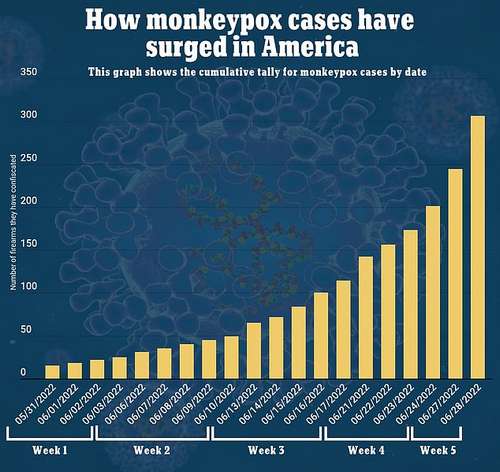 The map above shows where monkeypox cases have been spotted in the US, and the numbers being recorded in each state over the previous 24 hours

Lines form at a New York monkeypox vaccine clinic last week, which quickly ran out of the 1,000 Jynneos doses that were offered to men at high risk

Yesterday’s record case rise over takes the previous record set on Monday when 43 infections were reported.

But this figure included cases detected late Friday, Saturday and on Sunday.

The growing infection tally suggests that the rash-causing virus is increasingly spreading undetected in the United States.

Monkeypox ‘not a global emergency’, WHO says

The World Health Organization said the escalating monkeypox outbreak in more than 50 countries should be closely monitored but does not warrant being declared a global health emergency.

In a statement Saturday, a WHO emergency committee said many aspects of the outbreak were ‘unusual’ and acknowledged that monkeypox — which is endemic in some African countries — has been neglected for years.

‘While a few members expressed differing views, the committee resolved by consensus to advise the WHO director-general that at this stage the outbreak should be determined to not constitute’ a global health emergency, WHO said in a statement. 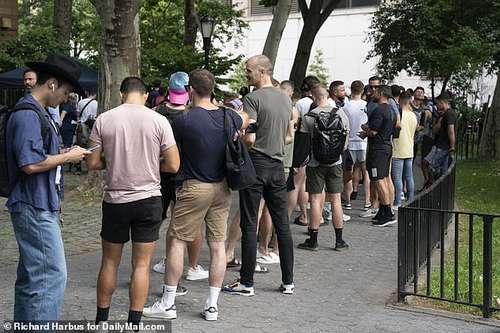 WHO nevertheless pointed to the ’emergency nature’ of the outbreak and said controlling its spread requires an ‘intense’ response.

The committee said the outbreak should be ‘closely monitored and reviewed after a few weeks’.

But it would recommend a re-assessment before then if certain new developments emerge — such as cases among sex workers; spread to other countries or within countries that have already had cases; increased severity of cases; or an increasing rate of spread.

New York City and Washington D.C. are the only two areas to start vaccinating the most at risk groups against monkeypox to date.

But both ran out of slots for the vaccines within hours of opening their clinics amid surging demand. In New York officials had just 1,000 doses.

Minnesota and Nebraska both recorded their first cases of monkeypox today.

The Biden administration’s plans to roll out more Jynneous jabs were revealed just hours after advocates sent a letter to the White House slamming the administration’s monkeypox response, saying that one million doses of the Jynneos vaccine already owned by the US are stuck in limbo in Denmark awaiting a facility inspection.

Although the vaccine itself has been approved for use by US regulators, the doses in Denmark were produced on a manufacturing line that is still awaiting Food and Drug Administration (FDA) approval, officials said earlier this month.

The letter from PrEP4ALL and Partners for Health said in part: ‘We must not allow the same failures of vaccine production and distribution that hampered the global COVID-19 response cause us to fail to contain the current monkeypox outbreak.’

‘If this is a test run for pandemic preparedness, we are flunking,’ PrEP4ALL co-founder James Krellenstein told the Washington Post.

‘We have more than a million doses of a vaccine FDA approved for preventing monkeypox,’ he said. ‘And the U.S. government cannot figure out how to get it out of freezers in Denmark — doses that it owns — when there’s uncontained spread in the gay community.’

The Biden administration’s new plan will immediately allocate 56,000 doses of Jynneos from a national stockpile to states and territories, with 1.6 million doses made available by the end of the year, officials said.

State and local health departments can also order supplies of Emergent BioSolutions’ older ACAM2000 vaccine, which is in much greater supply but which has more side effects and cannot be used by everyone, including those who are immunocompromised.

The United States has more than 100 million doses of ACAM2000 in its stockpiles, officials said earlier this month, but the vaccine is not recommended for those with HIV.

The United States has officially recorded 306 cases of monkeypox, a viral infection related to smallpox that causes painful skin lesions — but health officials fear that the true count could be higher.

Although the virus is endemic in parts of Africa, the current outbreak has hit countries where the virus does not usually spread, sparking concern that it could become more widespread.

Workers sit outside of D.C. Health’s first monkeypox vaccination clinic, which is administering the first Jynneos vaccine doses distributed in the U.S. capital on Tuesday

Even after Tuesday’s announcement, some advocates expressed concerns that vaccines would not get to those who need them the most, including men who have sex with other men, a group at higher risk.

David Harvey, executive director of the National Coalition of STD Directors, told the Post that the latest announcement was a ‘confusing mess’ that did not explain the formula for distributing vaccines.

‘There are profound questions of how they will allocate limited vaccines to which jurisdictions, and states and local communities need a coordinated federal plan,’ Harvey told the outlet.

‘We need to reach people who are at risk for monkeypox and conduct widespread vaccine efforts for gay people and other men who have sex with men.’

The White House said in a statement that the vaccine doses will be distributed to ‘areas with the highest transmission and need, using a tiered allocation system.’

Those at highest risk for monkeypox have been men who have sex with men. Demand for the vaccine has been growing. Last week, a New York clinic started offering the vaccine and quickly ran out of available shots.

Previously, health officials have been focused on offering the vaccine to individuals with direct contact with a person who has had a confirmed case of monkeypox.

Last Thursday, New York City’s health department – armed with 1,000 of doses of Jynneos from the federal government – announced it was opening a temporary clinic

The new strategy will expand that definition to include presumed exposures, said Dr Jennifer McQuiston, Deputy Director of CDC’s Division of High Consequence Pathogens and Pathology.

These would include those who had close contact with someone diagnosed with the virus, those who know their sexual partner was infected, and gay men who have recently had multiple sex partners in a venue where there was known to be monkeypox or in an area where it is spreading.

‘It’s almost like we’re expanding the definition of who a contact might be,’ said McQuiston. If people have been to a party or other place where monkeypox has been known to spread ‘we recommend they come in for a vaccine,’ she said.

The goal of the initial phase of the strategy is to slow the spread of the disease, administration officials said.

Most monkeypox patients experience only fever, body aches, chills and fatigue. People with more serious illness may develop a rash and lesions on the face and hands that can spread to other parts of the body.

There have been no U.S. deaths and officials say the risk to the American public is low. But they are taking steps to assure people that medical measures are in place to deal with the growing problem.

One of the steps was to expand who is recommended to get vaccinated. Vaccines customarily are given to build immunity in people before they are ever infected.

But if given within days or even a few weeks of first becoming infected, some vaccines can reduce severity of symptoms.

A two-dose vaccine, Jynneos, is approved for monkeypox in the U.S. The government has many more doses of an older smallpox vaccine – ACAM2000 – that they say could also be used, but that vaccine is considered to have a greater risk of side effects and is not recommended for people who have HIV.