Infections and hospital admissions have been climbing over the past fortnight, with the uptick partly blamed on hay fever sufferers wrongly assuming their sniffles are simply down to the pollen bomb and celebrations for the Queen’s Platinum Jubilee.

Covid’s resurgence won’t plunge the UK into even more chaos, scientists have claimed amid warnings of a new ‘Delta plus’ variant.

But scientists believe the country’s latest surge has mainly been fuelled by Omicron sub-variants BA.4 and BA.5, which are even more transmissible than the strain responsible for cases soaring to pandemic highs in April.

At the same time, analysts claim to have spotted the emergence of ‘probably the most fatal variant yet’. Experts have already dismissed the threat of Delta plus, however.

Professor Azeem Majeed, chair of primary care and public health at Imperial College London, said: ‘Variants such as BA.4 and BA.5 are a bigger problem than Delta plus. The number of reported cases of the Delta plus variant are small in comparison to the Omicron sub-variants that are currently circulating.’

Despite concerns that an uptick could cause carnage by causing staff absences to spiral across all sectors of the economy, No10’s own Covid advisers have publicly played downs fears out the incoming wave.

Covid cases surged by 40 per cent in England last week in what is feared to be the start of a fresh wave of the virus, official figures show. The Office for National Statistics (ONS) estimates 1.13million people were infected on any given day in the week ending June 10, the equivalent of one in 50 of the population. That figure is up 42 per cent on the previous week

Britain’s Covid resurgence could be partly down to people wrongly assuming they just have hay fever, experts claim amid warnings that the virus will cause even more disruption to Britons this summer.

Coughing, sneezing and a runny nose are now all tell-tale signs of the coronavirus, which has become milder as the pandemic has worn on.

But they are also symptoms which plague the lives of millions of hay fever sufferers when pollen levels begin to shoot upwards, like they have over the past fortnight.

The overlap means they can be mistaken for each other, according to Professor Azeem Majeed, a public health expert from Imperial College London. He added: ‘Because of immunity, people often get milder symptoms than before, and therefore may confuse it with other illnesses.’ 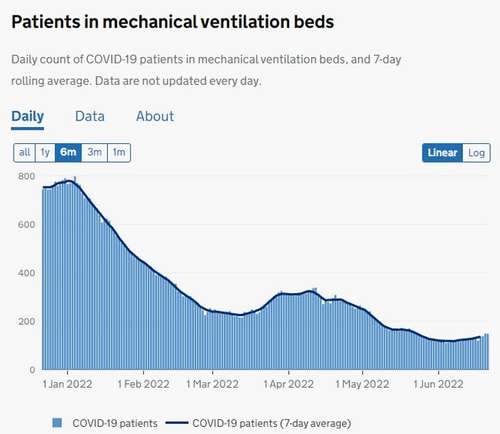 Latest surveillance statistics show Covid cases rose by 40 per cent last week, with one in 50 people infected in England — the largest weekly rise seen since Christmas. The uptick is already piling pressure on busy hospitals.

Celebrations for the Queen’s Platinum Jubilee, half-term holidays and Caribbean-esque weather are thought to have fuelled the latest surge, as well as the emergence of the more contagious Omicron sub-variants BA.4 and BA.5.

But it has hit in the middle of a pollen bomb. Hay fever sufferers have been told to prepare for even misery, with levels set to be very high across England, Northern Ireland and Wales all week. ‘Potent’ pollen has already been circulating the country for two weeks.

Experts say the levels are partly down to scorching temperatures last week, which saw the mercury surpass 30C (86F).

Despite warnings that the resurgence will trigger staff absences among all sectors in the wake of the biggest rail strikes in three decades, one Government adviser today said the wave be no worse than the UK has already seen this year.

Latest figures from the Office for National Statistics (ONS) show one in 50 people in England were infected in the week to June 11, roughly 1.1million.

Rates were highest in Scotland (one in 30) followed by Northern Ireland and Wales (both one in 45).

The surge in England marked a 41.8 per cent week-on-week rise — the largest logged since the week to December 31, when Omicron infections skyrocketed to pandemic highs of 4.1million.

The ONS’ weekly infection survey has become the best barometre of the outbreak in the post-pandemic era after free testing was axed and the daily dashboard was scaled down.

Hospitals are also being put under more pressure, with hospitalisations soaring by 36.7 per cent. Some 797 patients were hospitalised on June 18, compared to 583 one week earlier.

However, the proportion of patients in hospital primarily with the virus only makes up one third of these numbers, with the rest incidentally testing positive.

Sky-high immunity rates from Britain’s historic vaccination campaign and repeated waves have drastically blunted the threat of the virus over time, meaning it is now more comparable to flu.

Professor Majeed told the Telegraph described the uptick in cases as ‘slight’ and insisted the UK ‘will be okay over the next few months’ due to its protective wall.

However, he noted that: ‘The risk will probably come more towards the end of the year, particularly if people don’t come forward for their boosters when those are rolled out, although not all will get boosters this autumn.’

Government advisers are yet to confirm exactly who will be eligible for a booster jab this autumn. Interim advice, published last month, sets out that care home residents, frontline health and social care workers, over-65s and at-risk people aged 16 to 64 will be eligible for the top-up jab.

However, campaigners have called for the eligibility to be expanded.

It comes on the back of warnings about the emergence of a so-called Delta-plus variant. Cases have apparently jumped ten-fold in a fortnight, according to the Telegraph.

But the UK’s largest Covid variant tracker, the Sanger Institute, has not detected a noticeable uptick of the variant, which died off in January, shortly after Omicron burst onto the scene.

One expert claimed it was ‘probably the most fatal we’ve seen’, based on the fact Delta was already 67 per cent more deadly than other variants.

However, Sanger data does show BA.4 and BA.5 have been almost doubling in prevalence every week. The two strains now make up the majority of new cases (57.4 per cent).

South Africa and Portugal experienced a wave of the two Omicron sub-variants last month. Although, both spikes were a third of the original peak logged over the winter.

Despite expectations that the upcoming BA.4/BA.5 wave will be no worse than previous ones, the resurgence may trigger staff absences among all sectors in the wake of the biggest rail strikes in three decades.

Professor Gary McLean, an immunologist from London Metropolitan University, told MailOnline Britain can expect an ‘increase in absenteeism from work across all sectors’. He warned it will ‘obviously impact’ the health service as workers stay at home to recover, even though the infected have not legally had to self-isolate since post-pandemic rules were ushered in in April.

The uptick is also being felt in hospitals, where the number of daily Covid admissions in England has jumped 36.7 per cent in a week. Some 797 patients were hospitalised on June 18, compared to 583 one week earlier. However, the proportion of patients in hospital primarily with the virus only makes up one third of these numbers, with the rest receiving care for another illness but incidentally testing positive

However, Professor Edmunds, an epidemiologist at the London School of Hygiene and Tropical Medicine, said he expects the coming wave will be no worse than that already seen this year.

He told Radio 4’s Today programme that Covid cases are increasing ‘pretty much everywhere’. But looking abroad to other nations who have experienced waves of these strains, like South Africa, shows the uptick was ‘much less significant’ than previous Omicron waves.

Professor Edmunds said: ‘Can we extrapolate from there to here? Well, it’s not much to go on but possibly. So I would have thought that the coming wave is not going to be as bad as we’ve had or no worse than we’ve had in the last few months, I suspect at least.’

New virus variants are cropping up, and will continue to, because they are better at evading the immune response from natural infections and vaccination, he said. ‘So looking forward I think I am not overly worried about this wave,’ Professor Edmunds said.

He said the central question is where the pandemic is headed.

‘Is it going to be a rare disease that comes around every now and then or is it going to be quite prevalent, quite common and we get infected relatively commonly? And I think [the latter] is what we’re seeing,’ Professor Edmunds said.

Professor Edmunds noted that virus prevalence has not fallen below one per cent and there hasn’t been fewer than 5,000 people infected with Covid in hospital in the UK at one time since July.

‘These are big numbers really. So I think going forward Covid looks like it will be quite common,’ he added.