There are many myths about people who find the fountain of eternal youth, but we know they’re just that: myths. In nature, however, there’s a tiny jellyfish called Turritopsis, no larger than your fingernail, that does something quite miraculous.

When stressed by hunger or a sudden change in water temperature, it can revert to its young polyp stage and start its life all over again, ‘with no physiological recollection of having been older’. It’s akin to you being able to escape a stressful day at work by ‘deciding to revert back to being a kindergartner again’.

So writes Danish biologist Nicklas Brendborg in this captivating book about the mysteries of ageing. Turritopsis suggests that nature has already worked out ways to age backwards rather than forwards when required, while other creatures exhibit incredible recuperative powers and immunities.

In this era of gene editing and splicing, might we borrow something from them? The naked mole-rat, for instance, lives virtually free of cancer: of 1,000 studied, only six had developed tumours. And cancer, too, says Brendborg, is mostly an affliction of ageing.

Though, as he also points out, if all cancers were cured worldwide tomorrow, it would only increase life expectancy by 3.3 years. We would simply die of heart disease or Alzheimer’s instead.

But there’s much to learn from Jellyfish Age Backwards, a beguiling mix of biology and health advice. Drop those antioxidant pills at once. ‘It looks like antioxidant supplements will promote the growth and spread of certain cancers rather than limiting them … excessive antioxidants actually interfere with the process of getting stronger and healthier from exercise.’ Eat well instead.

Perhaps the essence of Brendborg’s insights lie in the concept of the ‘sweet spot’: there’s an ideal amount for everything, not too little, not too much.

He also says that broccoli, kale and cabbage are good for us as they are bad for us as plants do not want to be eaten (stock image) 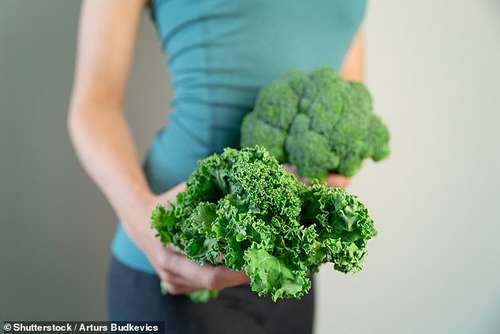 You actually need those supposedly ‘damaging’ free radicals to stimulate your own defence systems. Or consider exercise, says the author. It isn’t so much going for a run that’s good for you as the recovery mechanisms it triggers. Running itself sends your blood pressure rocketing, causes multiple tiny muscle tears, stresses the heart, overloads the joints. But when you go to sleep afterwards, the body’s superb repair systems go into turbo mode.

And they have evolved over millions of years precisely to repair any damage done by running, which our ancestors did a lot. Your body pumps out exactly the right amount of antioxidants, sends extra nutrients to repair the muscles, the heart gets stronger and so on. But run to exhaustion and you can leave your immune system weakened for days. It’s all about that sweet spot.

Funnily enough, it isn’t quite accurate to say that all those ultra-healthy but slightly bitter ‘leafy greens’ such as kale and cabbage are good for us. More precisely, they’re good for us because they’re bad for us. Plants don’t want to be eaten. Like us, they just want to grow up, produce seeds and leave offspring — so their leaves are full of mild poisons, those slightly sulphurous compounds that children loathe.

But it’s because they’re toxic that they’re good for us. They trigger our bodies’ defensive mechanisms. ‘You can consider eating a lot of plants a safe and superior alternative to ingesting toxins.’

It’s commonplace now to observe that modern life is too stressful, and there’s a mismatch between our essentially stone-age bodies and the pressure and speed of 21st-century living. But too little stress is as unhealthy as too much.

Consider this, says Brendborg. In 1991, scientists established the remarkable Biosphere 2, a kind of huge greenhouse in the Arizona desert, where they aimed to live entirely sealed from the outside world. At first, the trees inside the Biosphere flourished and grew rapidly.

But within two years, ‘many of the trees were already dead’. What was missing? Stress.

Specifically, strong winds, to bend them and toss them about. Trees are perfectly evolved to withstand all but the worst winds and grow much stronger as a result. Without this natural challenge, the trees inside the Biosphere grew fast but weak, they lacked resilience — and eventually toppled under their own weight.

One might easily apply this lesson to the dangers of an over-protected childhood and to ‘safe spaces’ and snowflakes, too, one would imagine.

The ancient stresses which strengthen us might include hard exercise (but not to exhaustion), strong sunshine (but not sunburn), high altitude (makes our lungs more efficient) and hunger. This last kind of stress is perhaps the one we avoid most. Who doesn’t love eating? Yet our ancestors would often go hungry for a day or two and thrived on it.

There is so much fascinating stuff here, although towards the end I began to part company with the author’s futurist optimism, as he hails the kind of high-tech bio-engineering that could see us live to 200 or more.

Would this really be a good thing on an already overcrowded planet? Should we be trying to lengthen our life, or deepen it? Enjoy our allotted years of love and laughter, then bow out gracefully to make room for a new generation of children to enjoy the world as we once did?

Our lifespans are only about one-third heritable at most, we’re told: the rest is up to us, to diet, exercise and sleep. And just the right amount of stress.