WASHINGTON — As Democrats and reproductive rights advocates clamored for President Biden to forcefully counter the Supreme Court’s decision overturning Roe v. Wade, his health secretary, Xavier Becerra, stepped up to a lectern here on Tuesday to list the steps his department would take to preserve and expand access to abortion.

“There is no magic bullet,” Mr. Becerra said at a morning news conference, “but if there is something we can do, we will find it and we will do it.”

The Supreme Court’s decision on Friday eliminating the constitutional right to abortion was not unexpected, yet neither the White House nor Mr. Becerra’s agency had immediate policy responses at the ready. Officials inside the administration say they are still wrestling with the prospect of a mainstream area of women’s health care suddenly becoming illegal in roughly half the country, and will need time to sort through their options.

Yet Mr. Biden is under intense political pressure to act, and after his news conference some advocates accused Mr. Becerra of sounding tepid. Some Democrats, such as Senator Elizabeth Warren of Massachusetts and Representative Alexandria Ocasio-Cortez, have been pushing the Biden administration to explore the prospect of building abortion clinics on federal land and paying for people from out of state to travel there for the procedure.

Those were not among the measures that Mr. Becerra announced. Instead, he said that at Mr. Biden’s direction he had instructed his agency to take steps such as making sure that federal insurance programs cover medication abortion in cases of rape or incest or when the life of the mother is at risk. Although the Hyde Amendment bars taxpayer funding for abortion, it includes exceptions for those three instances. 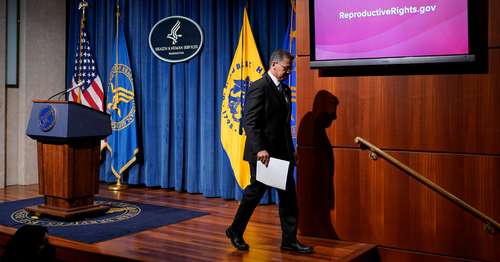 In addition to setting up abortion clinics on federal lands, Ms. Miller said the administration should figure out ways to support abortion clinics that are on the verge of closing, perhaps by repurposing them into logistical hubs to help women who need to cross state lines. About half the states are expected to allow bans or other limits on the procedure to take effect in the wake of the ruling, or already have.

Ms. Miller acknowledged that the administration does have limitations, and said she sympathized with Biden officials. But the nation is in a crisis, she said, adding, “Why not push the envelope?”

Mr. Becerra said his agency would work with the Justice Department to ensure that women have access to abortion pills — a pair of two different drugs, taken 24 to 48 hours apart and authorized for the first 10 weeks of pregnancy — in places where state law conflicts with the judgment of the Food and Drug Administration, which has approved the drugs for use and determined that they are safe and effective.

The secretary did not go into detail. But in December, the F.D.A. approved a regulation allowing abortion pills to be prescribed during telemedicine visits and distributed by mail. Some advocates also want the F.D.A. to declare that its regulations pre-empt state laws banning abortion — a move that the Justice Department might have to defend in court.

Commentary by Times Opinion writers and columnists on the Supreme Court’s decision to end ​​the constitutional right to abortion.

It will also require hospital emergency rooms to comply with a federal law mandating that they stabilize patients experiencing a medical emergency — including by performing abortions, if necessary. And the agency will take steps to ensure that patients’ records are private, to keep state or local officials from identifying women who have had abortions.

In sounding a note of caution about what the administration can and cannot do, Mr. Becerra said there were still complex legal issues it needed to sort out to ensure it does not violate the court’s ruling in Dobbs v. Jackson Women’s Health Organization.

“It was a long decision and it did upend 50 years of precedent, and so you want to make sure that what you do is within the confines of the law,” Mr. Becerra said. “We’re not interested in going rogue.”

He called the ruling “despicable,” and at one point said he wanted to offer “my apologies” that the administration cannot do more.

The administration has studied, but remains skeptical about, the idea of allowing abortion clinics on federal enclaves like military bases and national parks — where state prosecutors lack jurisdiction — in states where abortion is now or will be a crime.

The White House press secretary, Karine Jean-Pierre, dismissed the idea on Tuesday, telling reporters aboard Air Force One that it could have “dangerous ramifications” for women and doctors.

The problem, according to officials familiar with internal deliberations, is that the federal government could not ensure that doctors who are not federal employees performing official duties — and potentially patients — would not be at risk of prosecution.

That is because the Justice Department has the authority to prosecute certain state crimes. If a Republican were to win the presidency in 2024, his or her Justice Department could charge people with abortion-related crimes dating back to 2022, because the statute of limitations would not have run out. States could strip doctors of their medical licenses. And state prosecutors could try to charge people with related conduct that took place outside the enclave — like that of helping women get there — under a theory of aiding and abetting or conspiracy.

Offering financial help to women to cross state lines to get an abortion could also be problematic for the administration, because it might violate the Hyde Amendment, which bars federal funds from being used to pay for abortion except in cases of rape, incest or where the life of the mother is at risk.

When asked on Tuesday if the Department of Health and Human Services might provide such financial help, Mr. Becerra said that once officials know “exactly what we believe we are able to do, and have the money to do, we will let you know.” He added, “But until then, what I could simply say to you is every option is on the table.”

In the wake of Friday’s ruling, members of Mr. Biden’s own party have become increasingly vocal in demanding that he take action. On Saturday, more than 30 Democratic members of the Senate sent him a letter telling him there was “no time to waste” and pressing him to use the “full force of the federal government” to protect access to abortion care.

“Now is the time for bold action to protect the right to an abortion,” they wrote, adding, “You have the power to fight back and lead a national response to this devastating decision.”

One area where the administration can act is in ensuring that women have access to emergency contraception — including so-called morning-after pills, like Plan B — and intrauterine devices. Both are common methods of contraception, but abortion opponents regard them as “abortifacients” and have tried in some states to restrict access to them.

Some family-planning clinics in states that are banning abortion say their supplies of Plan B are now running short, because women — fearful that the pills will be outlawed — are stocking up. Hailey Kramer, a nurse practitioner at Tri-Rivers Family Planning in Rolla, Mo., said on Monday that the clinic’s supplier is grappling with soaring demand and the pills have been back-ordered since a draft of the opinion overturning Roe was leaked last month.

Missouri is one of 13 states that had “trigger” laws banning abortion after Roe was overturned; Mr. Becerra was visiting a Planned Parenthood clinic in the state when abortion suddenly became illegal there. Missouri is also one of four states that have excluded Planned Parenthood, a major provider of birth control, from Medicaid family planning programs that reimburse for such services.

Planned Parenthood has said the move violates federal law. Mr. Becerra said on Tuesday that he had directed the Centers for Medicaid and Medicare Services to “make clear that family planning providers are able to participate in the Medicaid program.”

Where Did the Black Death Begin?