Postnatal depression can affect both parents at the same time, research suggests. A review of global data found around one in 30 new mothers and fathers suffer the ‘baby blues’ — a common condition usually seen in new mothers.

It often strikes within a year of the child’s life, and is thought to be due to a hormonal changes, fatigue and the adjustment to parenthood.

Doctors estimate that as many as 20 per cent of new mothers suffer from postnatal depression but the psychological effect on men was less known.

The study, by University College London, looked at 30,000 new parents and found 3.2 per cent had postnatal depression simultaneously.

Around 3.5million babies are born in the US annually, suggesting 100,000 couples are affected by symptoms such as persistent sadness and low mood.

Dr Kara Smythe, lead study author, called for a move towards a ‘family-centred model of care’ that provides better support to new mothers and fathers.

WHAT IS POSTNATAL DEPRESSION?

Postnatal depression is a form of the mental-health condition that affects more than one in 10 women in the UK and US within a year of giving birth.

As many men can be affected as women, research suggests.

Many parents feel down, teary and anxious within the first two weeks of having a child, which is often called the ‘baby blues’.

But if symptoms start later or last longer, they may be suffering from postnatal depression.

Postnatal depression is just as serious as others form of the mental-health disorder. 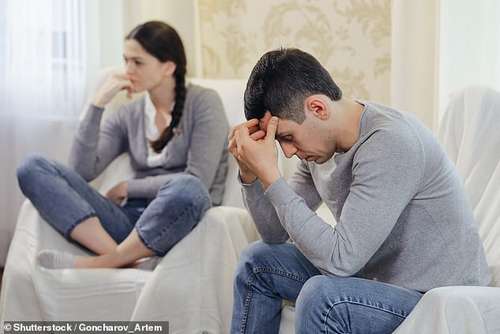 Lack of enjoyment or interest in the wider world

Struggling to bond with your baby

Frightening thoughts, such as hurting your baby

Sufferers should not wait for their symptoms to just go away.

Instead they should recognise that it is not their fault they are depressed and it does not make them a bad parent.

If you or your partner may be suffering, talk to your GP or health visitor.

Treatments can include self-help, such as talking to loved ones, resting when you can and making time to do things you enjoy. Therapy may also be prescribed.

In severe cases where other options have not helped, antidepressants may be recommended. Doctors will prescribe ones that are safe to take while breastfeeding.

Postnatal depression’s cause is unclear, however, it is more common in those with a history of mental-health problems.

Lack of support from loved ones, a poor relationship with the partner and a life-changing event, such as bereavement, can also raise the risk.

Symptoms of postnatal depression include a loss of interest in the baby, feeling hopeless, being unable to stop crying and not being able to enjoy anything.

Some patients also suffer panic attacks, anxiety and a loss of appetite.

The researchers analysed 23 studies, conducted in 15 countries between 1990 and 2021, including in the UK and US.

They contained data on 29,286 couples who had a successful pregnancy.

Each study looked at the rate of anxiety or depression in both mothers and fathers using surveys and medical records.

The findings, published in the journal JAMA Network Open, showed the risk of both parents suffering depression simultaneously increased after the baby was born.

Some 1.72 per cent of couples suffered depression during pregnancy.

And 3.18 per cent of parents were affected in the three to 12 months after childbirth.

The researchers also looked at the risk of parents suffering from mental health problems both at the same time and different times.

Overall, 11 per cent of new mothers and a tenth of new fathers in high-income countries experienced depression at some point during pregnancy.

After their baby was born, 13 per cent of women and nine per cent of men suffer from poor mental health.

And the risk of fathers suffering anxiety was three-times higher if the mother is depressed.

The team found that mothers were more at risk of developing poor mental health during or after pregnancy if they suffered from stress in early life, limited social support or had a violent partner.

Meanwhile, men were more at risk if they had low levels of education, were unemployed or had problems in their marriage.

And both women and men who previously struggled with their mental health were more likely to report struggles when they became parents.

A separate study by the same team of researchers found that two in five new mothers don’t receive a post-natal check-up six to eight weeks after giving birth, which is recommended by the National Institute for Health and Care Excellence.

And men receive no check-ups when they become fathers.

The researchers said they hoped doctors took note of their study and considered new fathers when looking at the mental health of new parents.

Current treatment for mental health problems during or after pregnancy include counselling and antidepressants.

‘With prevalence rates of two per cent to three per cent for depression in both members of the parental dyad, the potential burden is considerable.’

She added: ‘Perinatal depression can follow a protracted course.

Dr Smythe said future research should look at how mental health problems develop during and after pregnancy, which could change how doctors treat them.