Parents are struggling to find out whether their child’s polio vaccinations are up to date, it emerged today amid fears the eradicated disease is spreading in Britain again.

Health bosses issued a national alert after the paralysis-causing virus was detected in sewage samples in London, meaning it may be circulating domestically for the first time in almost 40 years. A call went out to British parents to check their youngsters’ innoculation records were up to date.

But some parents said they tried up to 30 times to get through to their GP receptionist and access their child’s medical records and were told to call back the next day or get in touch with schools instead.

There was further confusion as it emerged parents have to get permission from a GP to allow them to access their family medical records on the NHS app, meaning the only way for some people to find out their family’s vaccination status was to call their local doctor’s surgery directly.

Deborah Siddoway, who feared her 16-year-old son had missed his teenage booster polio shot because of the first Covid lockdown, revealed her GP had ‘absolutely no idea’ if he was jabbed and told her to phone his school, who initially didn’t know either. The mother, from Hexham, Northumberland, said she was left on hold for 45 minutes to ‘various NHS people’.

Polio vaccine coverage in England has been dwindling for years but dropped further during the pandemic, linked to a lull in appointments, school closures and a rise in vaccine hesitancy.

With just a third of teens fully inoculated in some parts of the capital, fears of an outbreak are rife. 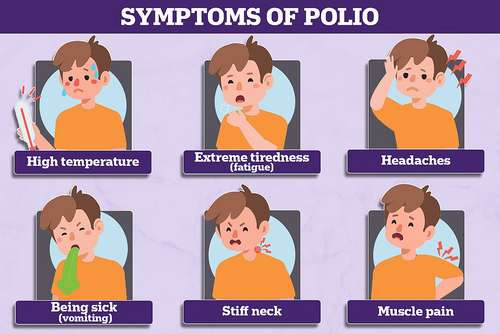 The extent of the current outbreak is not yet known but health experts are concerned doctors no longer recognise the symptoms of polio because it has been eradicated in Britain since 2003.

While the virus can lead to permanent paralysis in rare cases, it typically causes flu-like symptoms that could easily be misdiagnosed as other more common infections, like Covid.

The above map, based on UKHSA data, looks at the share of Year 9s who had all three polio jabs in the 2020/2021 academic year. The final polio booster is offered to all children by the age of 14 as part of the NHS school vaccination programme

The polio vaccine is given at age eight, 12 and 16 weeks as part of the six-in-one vaccine and then again at three years as part of a pre-school booster. The final course is given at age 14. The World Health Organization has set the threshold of a successful school jabs programme at 95 per cent uptake, which England is failing to hit by all accounts

The virus was detected at the Beckton sewage treatment works, which covers a population of four million in north and east London 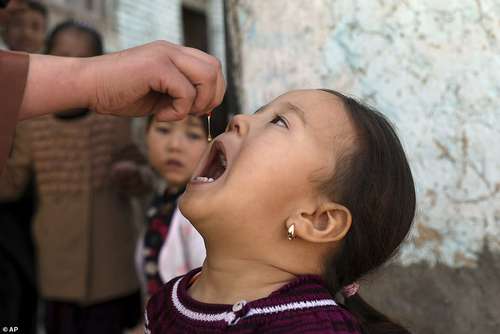 How the world is STILL vulnerable to polio: Vaccine uptake map reveals how DOZENS of countries including US and UK are below key threshold needed to contain virus

Data from the World Health Organization shows 114 of 160 nations have not hit its threshold of 95 per cent coverage in one-year-olds.

UK health chiefs yesterday revealed that the country could be seeing a resurgence of the disease for the first time in decades after strains were detected in sewage.

Experts deem having more than nine in 10 people in every community vaccinated crucial to prevent the highly contagious virus from spreading.

Being vaccinated is even more important for children than adults because they are more likely to catch and therefore fall ill with the disease.

While the majority will experience mild or no symptoms at all, for as many as one in 100, it can cause permanent paralysis or death.

Among the vulnerable countries are the UK and US, where overall uptake nationally is as low as 93 per cent. But in parts of Africa, as few as four in 10 are immunised.

And 35 nations, including France, Germany and Portugal, have not shared their polio uptake data — meaning even lower numbers could be protected in some places.

The NHS currently offers the polio jab as part of a child’s routine vaccination schedule. The polio vaccine is included in the six-in-one vaccination, which is given to children when they are eight, 12 and 16 weeks old.

Protection against polio is further boosted through top-up jabs given youngers before youngsters go to school, as part of the four-in-one booster, and when they are 14, in the three-in-one teenage booster. All of the jabs are needed to be fully vaccinated against polio.

The NHS points patients to their red book to find out if their child has been vaccinated against polio.

The book, also known as a personal child health record, is given to parents around the time their child is born and logs their vaccination status and other health information.

Ms Siddoway was concerned that her son may have missed his booster at 14 because of the first Covid lockdown in spring 2020.

When she contacted her GP to check his records on Thursday they had ‘absolutely no idea’ and told her to contact his school instead, where youngsters are often given the jab.

And the local School Age Immunisation Service (SAIS), which dishes out jabs at schools, struggled to find her child’s record.

Ms Siddoway told the Telegraph: ‘I’ve spent about 45 minutes on hold to various different NHS people to try and find out if my son is vaccinated, and if not, can we please have an appointment to get him vaccinated, and I am no further forward.’

She was eventually told by SAIS that a catch-up clinic was taking place the following week where her son could get jabbed. But because he finishes school after his final exam this week, it is unclear whether he and other final year students can attend.

Getting answers and the number of people she had to go through was ‘crazy’, Ms Siddoway said.

Other Britons have taken to Twitter to hit out at their struggles accessing their records on the NHS app, as some surgeries are said to require patients to fill in a form before linking their data with the app.

Some parents said they had tried ‘thirty’ times to get through to their GP receptionist and were told to call back the next day.

One mother, from Cheshire, took to Twitter to complain that her children are behind on their vaccinations but her local GP does not offer the jabs. The surgery pointed her to a child immunisation centre in a neighbouring county, where her children attend school.

But when she tried to book her youngsters in for immunisation, they told her to contact her doctor.

Official figures show that eight local authorities in England — mostly in London — had 50 per cent or lower uptake among Year 9s last year.

Just 35 per cent of 13 and 14-year-olds had received their final booster last year in Hillingdon, West London, which has the worst coverage in the country, followed by Brent, where a third were fully vaccinated.

Nottingham (50.4 per cent) and Middlesbrough (45.6 per cent) now also have some of the poorest rates, meanwhile coverage is below 60 per cent in Torbay, Leicester, Sandwell, Plymouth, Luton and Devon.

Rates are higher among younger children, with more than nine in 10 five-year-olds jabbed nationally.

Data from the World Health Organization shows 114 of 160 nations have not hit its threshold of 95 per cent coverage in one-year-olds. UK health chiefs yesterday revealed that the country could be seeing a resurgence of the disease for the first time in decades after strains were detected in sewage

Figures from Our World in Data show that 95 per cent of one-year-olds in Britain are vaccinated against polio, dropping to 90 per cent in South-East Asia, 87 per cent in the US and 74 per cent in Africa. The world average is 86 per cent