The Health Secretary announced the Government’s ‘once in a lifetime’ reforms in the draft Mental Health Bill.

He said the ‘momentous’ plans will make it harder for people with autism or learning difficulties to be institutionalised under law.

New proposals mean people can no longer be detained under the Mental Health Act purely because they have the conditions.

Instead, they can now only be sectioned if they ‘pose a significant risk to themselves or others’ because of separate mental health illnesses, Mr Javid said.

But Jeremy Hunt, who used to hold Mr Javid’s role, said the plan does not do enough to help up to 2,000 people with autism and learning difficulties currently trapped in secure facilities.

The new legislation — which updates a 1983 bill — will also make it harder for anyone to be unfairly detained.

It will see mental health patients given ‘more control over their care and treatment’.

Today’s announcement comes after Mr Javid opened up about his eldest brother’s suicide four years ago, saying he still struggles with survivor’s guilt.

WHAT IS BEING SECTIONED AND WHY DOES IT HAPPEN?

Being sectioned means being admitted to hospital whether or not you agree to it.

The legal authority for your admission to hospital comes from the Mental Health Act rather than from your consent. This is usually because you are unable or unwilling to consent.

The term ‘sectioned’ just means using a ‘section’ or paragraph from the Mental Health Act as the authority for your detention.

A better word is ‘detained’. You are detained under the Mental Health Act. The paragraph or ‘section’ number is often used so a patient may be told they are on a section 2 or section 3. 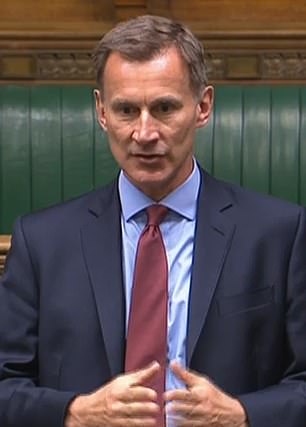 You may be detained if you have, or are thought to have, a mental illness which needs assessment or treatment which is sufficiently serious that it is necessary for:

your health or safety, or
for the protection of other people
and you need to be in hospital to have the assessment or treatment
and you are unable or unwilling to agree to admission.

The decision is usually made by two doctors and an Approved Mental Health Professional (AMHP). One of the doctors must be specially certified as having particular experience in the assessment or treatment of mental illness.

He described his family’s struggle to come to terms with their loss while visiting the London headquarters of suicide charity Papyrus on Friday.

Announcing the new bill in the House of Commons today, Mr Javid said: ‘One of my priorities in this role is personalised care and the blanket approach that currently exists cannot be allowed to continue.

‘It means too many autistic people and people with a learning disability are admitted into institutional settings when they will be better served in the community. This Bill will change that.

‘It limits the scope to detain people with learning disabilities and autistic people for treatment unless they have a mental illness that justifies a longer stay or if they are admitted through the criminal justice system.’

He added that the Government cannot make ‘critical reforms’, such as a new 10-year mental health plan and a 10-year suicide prevention plan, ‘without making sure that the law that underpins our country’s mental health system is up-to-date, too’.

Mr Javid said: ‘Since the 1983 Act, our understanding and our attitude towards mental health has transformed beyond recognition. And it’s right that we act now to bring this up to date.

‘The Mental Health Act was created so that people who have severe mental illnesses and present a risk to themselves or others can be safely detained and treated for their own protection, and for the protection of those around them.

‘But there are a number of alarming issues with the way that the act is currently used: too many people are being detained.

‘They are being detained for too long. And there are also inequalities amongst those that are detained.’

He added: ‘The Bill rebalances the criteria for detention, so it only takes place as a last resort when all other options have been explored and considered.

‘Under the new criteria, people will only be detained when they pose a significant risk of harm to themselves and others, and patients should only be detained if they will benefit from the treatment that is made possible by their detention.’

Mr Javid also claimed the Bill will give patients ‘more control over their care and treatment’, by making sure that ‘clinicians in most cases can only administer compulsory treatment if there is a strong reason to do so’.

But he said the reforms proposed by the current Health Secretary on people with autism do not ‘go far enough’.

He said: ‘We still have 2,000 with autism and learning disabilities who are in secure institutions, effectively incarcerated, even though they would be better-off in the community.

‘It is a human rights scandal.’

Mr Hunt called for No10 to change the rules so doctors have to reapply to section someone every week, ‘so there is pressure put on the system to find a better solution’.

Tory MP Huw Merriman, who chairs the all-party parliamentary group on autism, added 61 per cent of all people in mental health institutions have autism.

Mr Javid said: ‘We are determined, of course, to reduce the number of people with learning disabilities and autism that are in mental health hospitals.

‘As part of those plans we will shortly be publishing the cross-Government Building the Right Support Plan to drive this progress. So, we will have more to say about that shortly.’

Mr Javid said he would be happy to meet with Mr Hunt to discuss his sectioning suggestion.