There was no surge in hospitalizations or liver transplants due to hepatitis among children this winter despite 274 cases being recorded and six children dying from the disease, an analysis by health officials has found.

Scientists at the Centers for Disease Control and Prevention (CDC) who carried out the study said this suggested there were no more cases of child hepatitis being recorded now than before Covid hit the country.

But they pointed out there was no system in place for reporting and recording cases where youngsters are struck down by the inflammatory liver condition without a known cause.

In a statement, the agency said their results suggested ‘there hasn’t been a notable national-level increase’ in cases of hepatitis compared to before March 2020.

They added that it did not help to determine what was causing the mysterious hepatitis cases detected in both America and other countries — with scientists still working to establish whether it is due to a previous Covid infection, adenovirus — which causes the common cold, a weakened immune system or another factor.

CDC scientists also suggested in several other European countries data was ‘inconclusive’ as to whether they had recently seen a spike in child hepatitis cases, although they said the United Kingdom was one of those to report a spike compared to previous years.

Scientists not involved in the research said today the results provided ‘very useful information’ which suggested that a previous Covid infection may not be behind the illness. 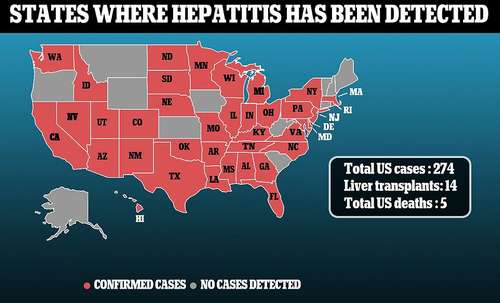 A total of 39 states have now reported cases of the mysterious hepatitis. Above are the states that have reported at least one case

Q&A: What is the mysterious global hepatitis outbreak and what is behind it?

Hepatitis is inflammation of the liver that is usually caused by a viral infection or liver damage from drinking alcohol.

Some cases resolve themselves, with no ongoing issues, but a fraction can be deadly, forcing patients to need liver transplants to survive.

They may also suffer from jaundice — when the skin and whites of the eyes turn yellow.

Why are experts concerned?

Hepatitis is usually rare in children, but experts have already spotted more cases in the current outbreak than they would normally expect in a year.

Cases are of an ‘unknown origin’ and are also severe, according to the World Health Organization.

What are the top theories?

British experts tasked with investigating the spate of illnesses believe the endless cycle of lockdowns may have played a contributing role.

Restrictions may have weakened children’s immunity because of reduced social mixing, leaving them at heightened risk of adenovirus.

This means even ‘normal’ adenovirus could be causing the severe outcomes, because children are not responding to it how they did in the past.

Other scientists said it may have been the adenovirus that has acquired ‘unusual mutations’.

This would mean it could be more transmissible or better able to get around children’s natural immunity.

America has so far reported more than 274 cases of mysterious hepatitis across a total of 39 states — or most of the country.

There have also been 14 liver transplants reported related to the condition, and six deaths.

The CDC study was published today in the agency’s Weekly Morbidity and Mortality Reports (MMWR) under early release.

Publishing the paper, they said: ‘The number of children hospitalized for hepatitis of unknown cause has stayed stable over the last four years.

‘While this study does not determine a cause for pediatric hepatitis of unknown cause, it does suggest that there hasn’t been a notable national-level increase in these cases recently compared to before the pandemic.’

In the study, scientists examined data from the National Syndromic Surveillance Program which covers about 70 percent of non-federal emergency departments (EDs) across all 50 states. They also looked at data from more than 1,000 hospitals that are run by the Premier Healthcare system.

For liver transplants, data was extracted from the Organ Procurement and Transplant Network (OPTN) which covers the entire country.

It showed that among 0 to 4-year-olds there were about 22 ED visits involving hepatitis per month from October 2021 to March 2022, which was not a significant change from 19.5 the year beforehand.

For children aged five to 11 years old there were about 12 ED visits over the year to March 2022 compared to 10.5 in the 12-month period beforehand.

In terms of liver transplants, there were about five recorded among under-18s every month from October 2021 to March 2022. For comparison, the figure was four for between October 2017 to March 2019.

Scientists said there was no significant rise in the numbers of children visiting EDs with hepatitis or needing liver transplant recently compared to the period before the pandemic.

The paper also looked at the proportion of stool samples from patients that had tested positive for adenovirus — the leading theory for the cause of the illness.

They found that the proportion picking up this virus remained between five and 19 percent among children up to four years old and three to 14 percent for those aged five to nine years old both before and after March 2020.

Looking globally they said it was ‘inconclusive’ whether several other European countries had also seen a rise in cases compared to previous years.

But in the United Kingdom — which was first to alert the world to the mysterious illness —  they noted that its health system had reported more hepatitis cases than previously.

Noting limitations in the research, they said: ‘Although liver transplants are well documented, cases of hepatitis of unknown [cause] are not reportable in the United States.’

They added that data could also be incomplete because it normally takes up to three months for a hospitalization with the condition to appear in their records. And they added that the Covid pandemic may have affected patterns they would expect to see because of how it changed healthcare seeking behavior.

Reacting to the study Dr Alasdair Munro, a pediatrician at Southampton University in the UK, said: ‘Interesting that the USA, with one of the highest burdens of Covid, has not seen an increase in cases of acute, severe hepatitis in young children during/since the pandemic.

‘It provides very useful information towards the exceedance observed in the UK’.