An ex ballerina and university student looking for a way to slim down her legs claims just one type of exercise transformed her body for the better – and it doesn’t involve stepping foot inside a gym.

Rachael’s program breaks down the female body into three separate categories and subscribes a diet and exercise routine depending on which type you are: Ectomorph, mesomorph or endomorph.

‘I did ballet from when I was seven until I was 16, so I think that helped me. When I do crunches and workouts like that I usually get abs instantly,’ Arianna said.

‘I always tried to be active after I stopped ballet, I used to do a lot, I did some Pilates and athletics. There wasn’t enough cardio in Pilates so I stopped. 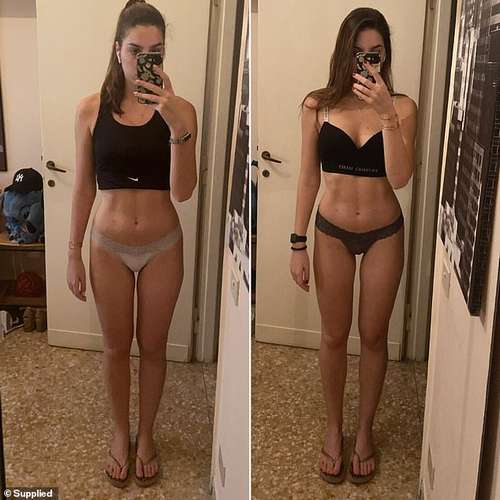 ‘I started to look for something to do at home since I didn’t want to go to the gym, I was too lazy.

‘Other programs changed my body but not the way I wanted since I’m tall and get big legs easily, so I didn’t like them.

‘I tried to do exercise at home with exercises I knew wouldn’t bulk my legs, but after a few months of doing the same thing I got really really bored and didn’t want to workout anymore.’

After following Rachael on Instagram for many years Arianna finally made the decision to purchase the personal trainer’s program.

‘So I bought the Lean Legs Video Course first, but since I wanted to try G.A.L., I stopped the Video Course after two weeks and started doing G.A.L full-time,’ she said.

‘Now I am doing the second round of G.A.L since I really enjoyed it. I think that the HIIT workouts are easier in GAL than in the video course. They are great and are challenging, but I don’t feel as exhausted after the workouts.

‘I also wanted to give running a try as I trusted Rachael 100 per cent and now I love it. Recently I ran for an hour since I was enjoying it.’

Arianna recommends taking pictures before you start the program and after to notice the incredible changes your body will make.

‘I typically workout at 5pm since I always did a ballet class at that hour. I just don’t overthink, but I put my clothes on, put on podcasts and music, maybe sometimes lessons from university, so that also changes,’ she said.

‘Sometimes I go for a walk and don’t listen to anything, it depends on how I feel.’

The young student started seeing results herself after four weeks and lost four kilos doing the first round of the program.

WHAT ARE THE THREE BODY TYPES?

Rachael Attard, from Sydney, said while many personal trainers will recommend that their clients follow the same exercise routine and diet approach, this will do nothing for your body – unless it’s right for your physique.

‘There are three female body types: ectomorph, mesomorph and endomorph, and finding out what your body type is and by adjusting your workout and diet to it, you will be training smarter and you will achieve better and faster results,’ Rachael told FEMAIL.

The first body type is ectomorph – and such women are usually characterised by being tall and slim.

‘Ectomorphs generally find it quite difficult to gain weight or muscle but are naturally low in body fat,’ Rachael explained.

Because of this, they need to adapt their diet and workouts accordingly.

Ectomorphs should up their resistance training to ideally three times per week, as this will help them to put on muscle.

‘Since ectomorphs find it quite hard to gain muscle and they lose weight easily, they should focus on heavy lifting, high-intensity interval training and resistance training,’ Rachael said.

This body type can also limit their cardio, as it’s not strictly necessary for slimming success.

‘Ectomorphs should also aim for one rest day per week or an active recovery day that includes some light walking or stretching,’ Rachael said.

‘Your body will gain muscle and strength very slowly so don’t be disheartened if you are not noticing any improvements straight away.’

When it comes to what you should eat, Rachael said ectomorphs need to eat lots of carbs, as this is the only body type that won’t gain weight by eating them.

However, this doesn’t mean you can eat whatever carbs you like.

The PT recommends you focus on the healthy, slow-release ones like wholegrain bread, brown rice, wholegrain pasta, quinoa and vegetables.

‘For your ectomorph body type, add in healthy fats and protein with every meal. This will also help you to recover from your workouts faster.’

The second body type is the mesomorph.

Mesomorphs are typically characterised by being naturally muscular with a medium-sized bone structure, broad shoulders, a narrow waist and ability to gain and lose weight quickly.

‘Mesomorphs do gain and lose weight, but they also see results from exercise quickly,’ Rachael said.

Rachael said mesomorphs should choose their weights according to their desired fitness results, so if they are trying to lose weight, they need to stick to body weight or lighter weight, higher rep workouts.

‘Try to do HIIT at least one or two times a week, and incorporate three dedicated cardio-focused days.’

You should also definitely be focusing on upping your cardio if you’re curvy, muscly and have a tendency to lose or gain weight:

‘High intensity cardio, such as running on a flat surface and at a stead pace, works best for fat loss,’ Rachael added.

From a diet perspective, mesomorphs look their best when they eat balanced macros – filled with a 30-35 per cent carbs, 35-40 per cent protein and 30 per cent fat.

‘Try to have all of the macronutrients in both your meals and your snacks,’ Rachael said.

Mesomorphs should also keep an eye on their calorie intake, as they can easily gain weight if they eat too much sugar.

‘The 80/20 approach is a good approach for mesomorphs,’ Rachael added.

‘If you really want to speed up stubborn fat loss and give your body a kickstart, you could try and low carb and high protein diet for four weeks,’ Rachael said.

Following this, you should switch back to eating balanced macros.

The final body type is the endomorph, and such women are characterised by being shorter and curvier.

‘Endomorphs can gain muscle very quickly, they have great strength and endurance, but may find weight loss a little more challenging and have a higher level of body fat,’ Rachael said.

Thus, they need to work out and diet accordingly.

The ideal workout for endomorphs is more reps with lower weights.

The trainer also said you could incorporate power walks into your routine, as power walks help to reduce fat on your legs while burning plenty of calories.

‘Try and do as much walking as you can; at least five times per week for 45 minutes at a time,’ Rachael said.

‘You could also incorporate low intensity training like walking with two or three days of moderate high-intensity cardio like running.’

She added that running at a steady pace on a flat surface works best for this body type.

Endomorphs should follow a low-carb diet, as their bodies are not very good at processing carbohydrates.

‘Make sure most of your carbs are coming from fruit and veggies, and skip the starches such as pasta, bread and rice,’ Rachael said.

‘While you can have treats, it’s a good idea to try and make them healthier, like chocolate avocado mousse or homemade protein balls,’ Rachael said.

If you must eat chocolate or lollies, eat it in moderation.

Previously, Rachael (pictured) has spoken about how important walking is for the average woman to see lasting results

Previously, Rachael has spoken about how important walking is for the average woman to see lasting results.

‘Walking is the best type of exercise for lean legs. It will help get rid of excess fat on your legs and lean them out,’ she said.

When you do cardio at a low to moderate intensity, she explained, the body burns stored glycogen (carbs) first, then fats. ⠀⠀⠀⠀⠀⠀

Rachael said she tried ‘every single workout under the sun’ but found ‘nothing is as effective in getting thinner thighs and legs overall as walking’.

‘Through my years of working as a PT with girls that had the same goal (specifically to get skinny legs), this has always been the best method,’ she added.