Bacteria-killing mouthwashes are also exterminating ‘good’ micro-organisms even those that create chemicals key for heart and immune system health, an expert warns.

Dr Kami Hoss, a San Diego, California area-based dentist and member of the Board of Counselors at the UCLA School of Dentistry, warned that the fluid millions of Americans use daily could be too good at killing the microbes.

He said that as well as killing off dangerous bacteria, mouthwashes also removed microbes making nitric oxide — a chemical produced when breaking down food — which has been linked to improved blood pressure and better heart health.

Mouthwashes have been slammed in the past by some small studies which claimed they raised the risk of conditions including high blood pressure and cancer.

But these findings are yet to be stacked up by larger studies, with the medical consensus remaining that they are safe and effective at improving breath and removing plaque from the mouth.

American Dental Association (ADA) says fluids should be used in addition to flossing and brushing teeth, and no more than twice a day by people over six years old.

A dentist has suggested people should not use mouthwash because they kill both good and bad bacteria. But it is yet to be confirmed whether this has a negative impact on oral health (file photo)

Should I use mouthwash?

Dentists say that mouthwash is safe to use and can help improve mouth health.

But they say it is in addition to standard care such as brushing teeth every day.

Mouthwashes can help clear debris from the mouth and improve breath, they say.

But people without any gum problems should avoid using those containing alcohol because they could ‘dry out’ the mouth.

Instead, these should only be used by people suffering from periodontal disease. 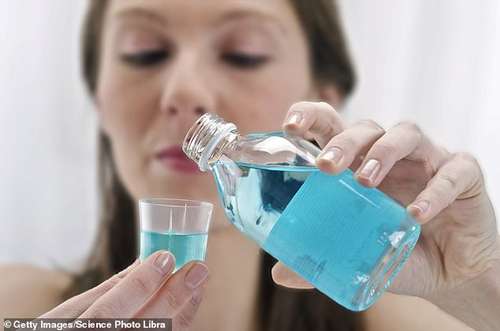 Hoss wrote in his book, ‘If Your Mouth Could Talk: An In-Depth Guide to Oral Health and Its Impact on Your Entire Life’, that mouthwashes kill all bacteria except the ‘baddest, toughest, roughest little microbes around,’ reports TODAY.

‘These are then poised to recolonize that entire mouth, totally unchecked by the organisms that used to hold them at bay’.

One of the organisms that gets killed off makes the chemical nitric oxide, which he said is linked to improving blood pressure.

A study from 2013 found that blood pressure was raised when people used mouthwashes that killed off the bacteria.

But it used a type of mouthwash containing chlorhexidine, which is usually only available on prescription, and included just 19 people.

Nitric oxide — produced when food is broken down — is made by both bacteria and the human body.

It is primarily used to help cells communicate in humans, but it is unclear whether the amounts made by bacteria in the mouth are also absorbed and used for this purpose.

Experts have also suggested it could also help immune cells communicate — leading them to respond faster to an infection.

It has also been claimed that it can improve muscle performance by allowing cells to work faster.

However, no study has shown that mouthwashes can lead to worse immunity or athletic performance.

A separate study from 2014 also suggested mouthwashes containing alcohol could raise the risk of oral cancer.

But other scientists also disputed these results, pointing out it was based on people who used mouthwash excessively — more than three times a day.

Dr Kami Hoss (pictured), a member of the UCLA School of Dentistry’s Board of Counselors, warned that mouthwashes could also kill valuable micro-organisms

Dentists say that mouthwashes should only be used in addition to brushing teeth twice a day and flossing.

They also say they are safe, and can help clear the mouth of debris and reach areas that are hard to access with a toothbrush.

But most Americans should avoid those that contain alcohol, they add, because these could dry out the mouth.

Only people suffering from periodontal disease should use them because it can help clear bacteria causing the disease.

The ADA says mouthwashes should not be used by children less than six years old because there is a risk they could swallow the fluid.

It comes amid suggestions that mouthwashes could actually help to treat Covid patients.

A hospital in Salisbury, England, is has offered patients one of three household brands following research by one of their own doctors.

They said that the washes were cheap, completely safe and had wider health benefits, so even if they only helped a bit they are still worth using.

Lab tests suggests the chemicals in mouthwash can kill Covid in just 30 seconds. But the results are yet to be backed up by rigorous clinical trials.

And a long line of studies during the pandemic have linked bad oral hygiene to a severe Covid infection. But some say having bad teeth may just be indicative of overall poor health.

Doctors at hospital, which treats around 15 Covid-infected patients every day, say almost everyone has taken up the offer.

They are doing this based on a theory which suggests after Covid infects the nasal cavity it spreads into the mouth. Once here it moves through the gums into the bloodstream, and hitches a ride around the rest of the body.

This is yet to be proven, but the virus has previously been detected in the mouth, testicles, intestines and other areas.

You Can Get Covid Again. Heres What to Know About Reinfection