More Britons than ever are at risk of triple-infections this year because lockdowns have suppressed our immune systems, scientists warn.

Leading virologists fear a bad flu outbreak ahead because the virus was effectively drowned out by restrictions deployed to fight Covid, meaning the nation has little immunity against it.

But the endless cycle of virus-controlling curbs have also left society vulnerable to other seasonal illnesses, such as RSV and adenovirus.

And Covid is also expected to continue circulating.

Professor Paul Hunter, an infectious disease expert at the University of East Anglia, said a bad flu year would inevitably ‘raise the risk of triple infections’.

It comes after US doctors claimed children were turning up to clinics infected with three viruses at the same time, in what was claimed to be a result of Covid policies weakening their immune system.

One expert said it was ‘not typical for any time of year’. 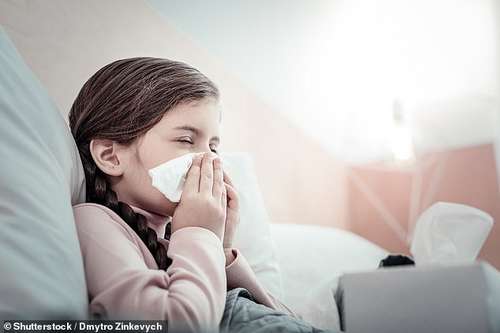 Children are being infected with up to THREE viruses at a time because COVID measures have worn down their immune systems, experts warn

Children are turning up in doctors’ clinics infected with as many as three different types of viruses, in what experts believe is the result of their immune systems being weakened from two years of Covid lockdowns and mask-wearing.

Medical staff have come to expect a surge in cases of flu and severe colds during the winter.

But they are reporting that there is not the usual downturn as summer approaches – and they suspect it could be due to the strict pandemic practices.

Furthermore, some of common strains of the flu appear to have disappeared, flummoxing scientists.

Professor Thomas Murray, an infection-control expert of paediatrics at Yale, told The Washington Post on Monday that his team was seeing children with combinations of seven common viruses – adenovirus, rhinovirus, respiratory syncytial virus (RSV), human metapneumovirus, influenza and parainfluenza, as well as the coronavirus.

Some children were admitted with two viruses and a few with three, he said.

‘That’s not typical for any time of year and certainly not typical in May and June,’ he said.

Centers for Disease Control and Prevention data obtained by MailOnline showed lower overall levels of influenza infections among young children – but an abnormal surge starting several weeks ago during the beginning of the summer months, normally a dead period for respiratory infections.

Professor Thomas Murray, an infection-control expert and expert in paediatrics at Yale, told The Washington Post they were seeing children with combinations of adenovirus, rhinovirus, RSV, human metapneumovirus, flu, parainfluenza and Covid itself.

He added: ‘That’s not typical for any time of year and certainly not typical in May and June.’

CDC statistics show there has been an abnormal surge in flu, starting several weeks ago.

It occurred during the beginning of the summer months, normally a dead period for respiratory infections.

But the US has been slower to embrace the post-pandemic era, with it dropping the requirement for all travellers to test negative at the weekend.

Flu rates have yet to pick up in Britain, and barely ticked upwards after most restrictions were axed last year.

But the flu season tends to mirror what has happened in Australia and the rest of the Southern Hemisphere.

Professor Hunter said considering what is happening overseas, an increase in triple infections may occur later this year.

‘I believe Australia is suffering a surge in influenza at the moment. And we know that if Australia gets it bad during our summer, we get it bad the following winter.

‘It’s not unreasonable to expect that we will have a bad flu year this year and raise the risk of triple or co-infections.’

He explained that with common seasonal bugs like colds and flus people get infected then enjoy a period of enhanced protection, with their immune system on guard against the viruses.

‘It could be as short as a couple of years, but it could be a bit longer,’ he said.

‘This is the case with other coronaviruses, influenza, norovirus and adenoviruses for example.’

But Professor Hunter added if people are isolated away from these viruses for a long period, like what occurred during two years of on-and off-lockdowns, this protection was greatly diminished.

‘If you are then not exposed to viruses for a long time, you lose your immunity to infection and you are more susceptible when society opens again, and you can be exposed to multiple viral infection at same time,’ he said.

‘It also means when you are exposed, if the gap has been long enough, you might also get more ill than you would have otherwise.’

He added it was unclear if any such infections were happening in the UK currently, however he claimed it was likely ‘inevitable’.

Dr Simon Clarke, a cellular microbiologist at the University of Reading said triple infections were ‘unusual but not unheard of’.

He also said it was more likely the UK would experience these infections during the winter but added we could also see a low level of cases now.

‘You’d expect flu and colds to increase during the winter so there’s more chance of it happening during the winter but it’s not beyond the realms of possibility you might see relatively low levels in summer,’ he said.

Dr Clarke also said lockdowns and other pandemic restrictions would have reduced our immunity to these viruses — but added this was still best outcome compared to letting Covid rip through the population.

‘It’s an unintended consequence… but the cost of doing it this way is lower than not doing it,’ he said.

While triple infections may occur, scientists insist they most likely wouldn’t result in severe illness in the vaccinated.

Last year flu was predicted to bring the NHS to its knees due to concerns about it and Covid circulating at the same time.

However, this did not come to pass.

But several common bugs suppressed during the early phase of the Covid pandemic have resurged since lockdown rules ended, official statistics suggest.

Scientists had warned the viruses were bound to make a comeback after face masks, social distancing and other pandemic curbs were dropped.

Do Vaccines Protect Against Long Covid?