Cyberbullying has a worse impact on its young teenage victims than ‘traditional’ bullying in person, a new study has revealed.

Researchers from the US and Israel analysed data collected on over 10,000 US children between the ages of 10 and 13 between July 2018 and January 2021 for the Adolescent Brain Cognitive Development study (ABCD Study).

They found that victims of online bullying in early adolescence are more likely to report suicidal thoughts and attempts than those who have experienced bullying offline.

‘At a time when young adolescents are spending more time online than ever before, this study underscores the negative impact that bullying in the virtual space can have on its targets,’ said senior author Dr Ran Barzilay, an assistant professor at the Lifespan Brain Institute (LiBI) of Children’s Hospital of Philadelphia.

Cyberbullying has a worse impact on its young teenage victims than ‘traditional’ bullying in person, a new study has revealed

This includes trolling, mobbing, stalking, grooming or any form of abuse online.

Cyberbullying is most certainly on the increase – more and more cases are being reported by children and by extremely worried parents.

The suicide rate in children has been steadily increasing, and in 2018 it became the second leading cause of death of people aged between 10 and 24 in the US, according to the Centers for Disease Control and Prevention (CDC).

The factors contributing to suicidality in children and adolescents are not fully understood, but research has shown that environmental stressors play a role.

However, one of the surprising findings of the study by LiBI, the University of Pennsylvania and Reichman University in Israel, published in the journal JAMA Network Open, was that online bullying is a distinct phenomenon, independent of offline experiences of bullying.

In modern times, and particularly since the COVID-19 pandemic, a substantial proportion of peer interaction, including bullying, occurs online, through text messages or social media platforms.

However, prior to this study, it was not clear whether being a target of cyberbullying was an independent risk factor for suicidality.

In modern times, and particularly since the COVID-19 pandemic, a substantial proportion of peer interaction, including bullying, occurs online, through text messages or social media platforms

While bullying is often perceived as a playground activity, a report has revealed that the majority now occurs online.

A study by Ofcom in May showed that 39 per cent of 8-17-year-olds have experienced bullying.

Among these children, the bullying was more likely to happen online (84 per cent) than face-to-face (61 per cent).

The ABCD study defines cyberbullying as ‘purposefully trying to harm another person or be mean to them online, in texts or group texts, or on social media (like Instagram or Snapchat)’. 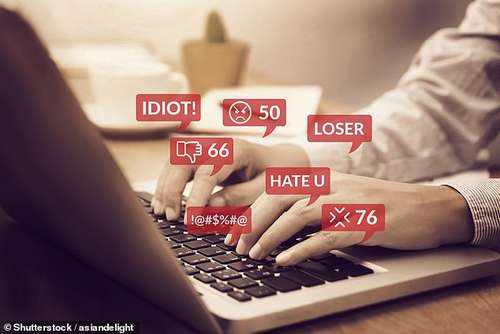 That finding was distinct from traditional offline bullying, where being either a target or a perpetrator of bullying is linked with suicidality.

However, the report states that the association between experiencing cyberbullying and suicidality in early adolescence was ‘significant over and above other suicidality risk factors, including offline peer aggression experiences or perpetration’.

This remained the case when accounting for demographics, environmental factors, and psychopathology.

Thus suggests that the youngsters affected by cyberbullying are different from those affected by offline bullying.

‘Given these results, it may be prudent for primary care providers to screen for cyberbullying routinely in the same way that they might screen for other suicide risk factors like depression,’ said Dr Ran Barzilay

‘Educators and parents should also be aware of the substantial stress bullying in the cyberworld places on young adolescents.’

With the rise of cyberbullying due to the Covid-19 pandemic, the team caution that more research needs to be carried out to be completely clear as to the effects of the phenomenon.

If you are struggling with depression or suicidal thoughts, you can call The Samaritans’ 24/7 helpline on 116 123 for help and support.

Bullying can affect everyone; those who are bullied, those who bully, and those who witness bullying.

Bullying is linked to many negative outcomes including impacts on mental health, substance use, and suicide.

It is important to talk to children to determine whether bullying, or something else, is a concern.

Children who are bullied

Children who are bullied can experience negative physical, school, and mental health issues.

Children who are bullied are more likely to experience:

Depression and anxiety, increased feelings of sadness and loneliness, changes in sleep and eating patterns, and loss of interest in activities they used to enjoy.

These issues may persist into adulthood.

They are more likely to miss, skip, or drop out of school.

A very small number of bullied children might retaliate through extremely violent measures.

In 12 of 15 school shooting cases in the 1990s, the shooters had a history of being bullied.

Children who bully others

Childrens who bully others can also engage in violent and other risky behaviors into adulthood.

Children who bully are more likely to:

Abuse alcohol and other drugs in adolescence and as adults
Get into fights, vandalise property, and drop out of school
Engage in early sexual activity
Have criminal convictions and traffic citations as adults
Be abusive toward their romantic partners, spouses, or children as adults
Bystanders

Children who witness bullying are more likely to:

Have increased use of tobacco, alcohol, or other drugs
Have increased mental health problems, including depression and anxiety
Miss or skip school
The Relationship between Bullying and Suicide

Media reports often link bullying with suicide. However, most youth who are bullied do not have thoughts of suicide or engage in suicidal behaviors.

Although children who are bullied are at risk of suicide, bullying alone is not the cause.

Many issues contribute to suicide risk, including depression, problems at home, and trauma history.

Additionally, specific groups have an increased risk of suicide, including black and minority ethnic, lesbian, gay, bisexual, and transgender youth.

This risk can be increased further when these children are not supported by parents, peers, and schools.

Under the Skin, by Linda Villarosa