A new colorectal cancer drug has shocked researchers with how effective it is against the highly dangerous disease, after it virtually cured every member of a clinical trial.

Dostarlimab, a monoclonal antibody drug that is already approved to treat endometrial cancer in the UK, smashed expectations in a trial at Memorial Sloan Kettering Cancer Center in New York.

One year after the trial ended, each of the 18 participants’ cancer had gone into remission, with doctors unable to find signs of the cancer in their body.

While the trial was small, it is considered game-changing, and sets up the drug as a potential cure for one of the most dangerous common cancers known.

However, dostarlimab can only be used on up to a tenth of colorectal cancer patients who have a genetic mutation in their tumour, which all trial participants had. 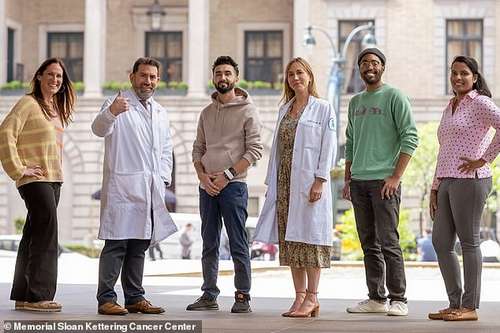 Dr Luis Diaz, one of the lead authors of the paper, said: ‘I believe this is the first time this has happened in the history of cancer.

‘It’s really exciting. I think this is a great step forward for patients.’ 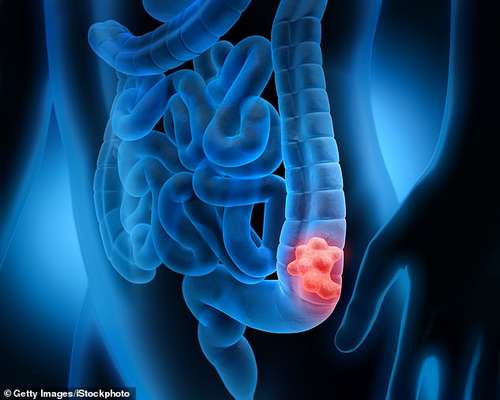 Diaz, who is also a member of the White House’s National Cancer Advisory Board, told the New York Times the discovery was ‘the tip of the iceberg.’

‘We are investigating if this same method may help other cancers where the treatments are often life-altering and tumors can be MMRd,’ he said.

‘We are currently enrolling patients with gastric (stomach), prostate, and pancreatic cancers.’

A recent clinical trial of the drug dostarlimab, a monoclonal antibody, found that it virtually cured cancer in every participant (file photo)

Patients who received the drugs saw their tumors shrink after three months of treatment (middle), before dropping even more in size at six months (left)

HOW DOES DOSTARLIMAB WORK?

Dostarlimab (also known as TSR-042) is a type of immunotherapy called a monoclonal antibody.

It works by attaching to a protein called PD-1 on the surface of cancer cells.

This helps the immune system to recognise and attack the cancer.

A 500mg dose of he drug is administered into the blood stream through a drip into a vein over a 30-minute period.

The treatment can trigger mild side-effects, including a rash, dry and itchy skin, fatigue and nausea.

It is already used to treat around 100 women with advanced endometrial cancer in the UK. For these patients, the drug is given every three weeks for 12 weeks.

In the trial involving 18 colorectal cancer patients in the US, it was administered every three weeks for six months.

However, the NHS has agreed a discount with the manufacturer GlaxoSmithKline.

Around 43,000 Britons and 150,000 Americans are diagnosed with colorectal cancer every year.

Dostarlimab can be used in patients who have tumors with a specific genetic makeup known as mismatch repair-deficient (MMRd) or microsatellite instability (MSI).

Just five to 10 percent of all rectal cancer patients are thought to have MMRd tumors, including all the patients in the clinical trial.

The monoclonal antibody works by attaching to a protein called PD-1 on the surface of cancer cells.

This helps the immune system effectively ‘unmask’ hiding cancer cells and destroy them.

The 18 patients had all gone through previous treatments for colorectal cancer before the trial, including chemotherapy and risky surgeries.

Researchers followed up with the patients 12 months later, and the cancer had seemingly vanished from their bodies, with the medical staff unable to find signs of tumors with any of the available screening methods.

However, the NHS has agreed a discount with the manufacturer GlaxoSmithKline (GSK), which sponsored the US trial, to treat advanced endometrial cancer.

Dostarlimab is given to around 100 advanced endometrial cancer patients every year. The life-extending drug aims to improve their quality of life and avoid chemotherapy, which has more side effects and a limited benefit.

Diaz said: ‘Our message is: Get tested if you have rectal cancer to see if the tumor is MMRd.

‘No matter what stage the cancer is, we have a trial at Memorial Sloan Kettering that may help you. And MSK has special expertise that really matters.’

‘At the time of this report, no patients had received chemoradiotherapy or undergone surgery, and no cases of progression or recurrence had been reported during follow-up,’ researchers wrote in the study published in the New England Journal of Medicine.

‘There were a lot of happy tears,’ said Dr Andrea Cercek, an oncologist at Memorial Sloan Kettering Cancer Center and a co-author of the paper, which was presented Sunday at the annual meeting of the American Society of Clinical Oncology.

Furthermore, no more treatments were required.

‘It’s incredibly rewarding to get these happy tears and happy emails from the patients in this study who finish treatment and realize, “Oh my God, I get to keep all my normal body functions that I feared I might lose to radiation or surgery”, Dr Cercek said.

Cercek takes a selfie with one of her patients, Imtiaz Hussain

While the results of the study are ground breaking, researchers note that the sample size was relatively small and it will take more research to determine whether they have actually stumbled on a cancer cure (file photo) 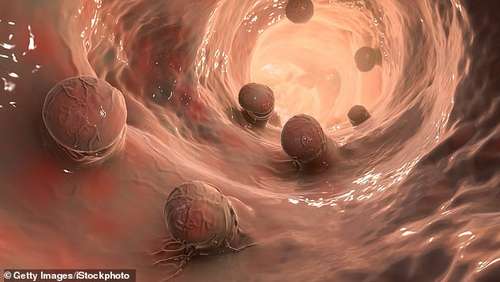 Signs and symptoms may include blood in the stool, a change in bowel movements, weight loss, and fatigue.

Every year, in the US:

Every year, in the UK:

US = for all aged 45 or over, or younger if family history or aggravating factors

UK = from the age of 60, or younger if medically necessary

As a result, all of the participating patients were able to avoid going through more dangerous, taxing, treatments.

‘[The results] enabled us to omit both chemoradiotherapy and surgery and to proceed with observation alone,’ researchers wrote.

Surgery and radiation can have permanent effects on fertility, sexual health, and bowel and bladder function.

‘The implications for quality of life are substantial, especially among patients in whom standard treatment would affect childbearing potential.’

The treatment triggered mild side-effects, including a rash, dry and itchy skin, fatigue and nausea.

Around 20 percent of participants felt an adverse effect, but they were easily managed.

While this study is ground breaking, and looks like doctors may have stumbled onto a cancer cure, they know it is too early to declare this a miracle drug.

The researchers noted that the results are ‘promising’ but need to be repeated in larger studies.

Dr Hanna Sanoff of the University of North Carolina’s Lineberger Comprehensive Cancer Center, said the results were ‘small but compelling.’

Dr Sanoff, who was not involved in the study, said it is not clear if the patients are cured.

‘Very little is known about the duration of time needed to find out whether a clinical complete response to dostarlimab equates to cure,’ she said in an editorial.

The first patient of the 18 was Sascha Roth, then 38, who noted some rectal bleeding in 2019 but felt fine.

She had a sigmoidoscopy — a test to look inside the lower part of the bowel — and her gastroenterologist said: ‘Oh no. I was not expecting this.’

Ms Roth’s doctor called the next day, and told her: ‘It’s definitely cancer.’

She was due to begin chemotherapy at Georgetown University, but a friend recommend she first see Dr Philip Paty at Memorial Sloan Kettering, who then told her that her cancer included the mutation that made it unlikely to respond well to chemotherapy.

She was, however, eligible to begin the trial with dostarlimab.

Ms Roth did not expect the trial to work, and had planned to move to New York for radiation, chemotherapy and possibly surgery after the trial ended – even having her ovaries removed and put back under her ribs to preserve them.

After the trial, Dr Cercek told her the good news.

‘We looked at your scans,’ she said. ‘There is absolutely no cancer.’

Roth added: ‘I told my family. They didn’t believe me.’

How Often Can You Be Infected With the Coronavirus?