Despite additional federal funding, U.S. schools reported that they were most likely to rely on low-cost strategies to improve ventilation to slow the spread of the coronavirus, according to a study published Tuesday by the Centers for Disease Control and Prevention.

The measures include holding activities outside, opening doors and windows, and inspecting existing heating, ventilation and air conditioning systems, the study said.

Only about one-third of public schools reported taking costlier steps such as replacing or upgrading their HVAC systems. Fewer than one in three said they used high-efficiency particulate air (HEPA) filtration systems in classrooms and cafeterias.

The authors of the C.D.C. report suggested that while schools in wealthier areas may have already had resources to upgrade their systems, schools in high-poverty areas might have more experience accessing and using federal funds for such purposes. 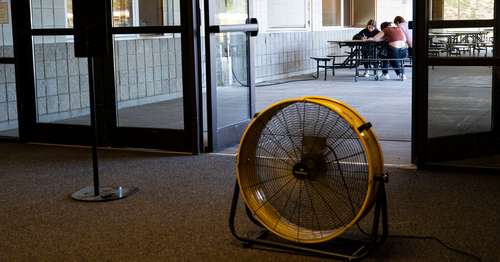 By contrast, only one in four or five schools serving communities with medium levels of poverty reported using HEPA filters in those places.

The study was based on the findings of a nationally representative sample of 420 K-12 public schools, using data gathered between Feb. 14 and March 27 from the National School Covid-19 Prevention Study. The sampling framework consists of public schools from all 50 states and the District of Columbia; it is a web-based survey distributed to school administrators.

Only 26 percent of schools that received the survey in February and March responded, however. The percentage of students eligible for free or discounted meals was used to determine the community poverty level of each school.

Location also was correlated with measures taken to improve ventilation: Rural schools were less likely to use portable HEPA filtration systems than schools in cities and suburbs.

Schools in cities, on the other hand, were less likely to open windows than rural, suburban or town schools, possibly because of concerns about noise and air pollution (some may also have windows that do not open). City schools were also less likely to use fans to increase the movement of air when they did open windows.

“Additional efforts might be needed to ensure that all schools successfully access and use resources for ventilation improvements,” particularly schools in rural areas and those with medium levels of poverty, the authors wrote.

As the Great Salt Lake Dries Up, Utah Faces An Environmental Nuclear Bomb

Counting calories is a waste of your time

F.D.A. Authorizes a Type of Underwear to Protect Against Infection During Oral Sex