WASHINGTON — The only Americans still not eligible for coronavirus vaccines — babies, toddlers and preschoolers — appear on the verge of finally getting cleared to receive them after an advisory panel to the Food and Drug Administration voted unanimously on Wednesday to recommend the Pfizer and Moderna vaccines for the group.

The F.D.A. appears poised to authorize Moderna’s vaccine for children younger than 6 and Pfizer’s for those younger than 5 as soon as Friday. States have already ordered millions of doses, and White House officials have said shots could roll out as early as next week.

The committee’s 21-0 votes came after a daylong review of clinical trial data and signaled the end of a process that involved months of false starts and dashed hopes for a vaccine to cover the youngest Americans. Except for the roughly 20 million children under 5, everyone has had access to coronavirus shots for many months and is eligible now for booster shots.

The F.D.A. and the Centers for Disease Control and Prevention jointly made a strong push for a positive recommendation, showering the committee with 230 pages of data that they said showed the vaccines were safe and provoked a strong immune response in children. Regulators also emphasized that even though young children are generally at low risk for serious illness from the virus, vaccinating the group would save lives.

“We have to be careful that we don’t become numb to the number of pediatric deaths because of the overwhelming number of older deaths here,” Dr. Peter Marks, the F.D.A.’s top vaccine regulator said. “The intervention we’re talking about here is one that is something that we have accepted in the past to try to prevent deaths from influenza,” he added.

Officials from the C.D.C. said that more than half of young children hospitalized with Covid had no underlying medical conditions. During the Omicron wave in the winter, young children were hospitalized at a higher rate than older children and adolescents, and their illness tended to be at least as severe. More than 200 children aged 6 months through 4 years old have died of Covid, according to death certificate data that is one of the most conservative estimates.

The panel members, some of whom have treated hospitalized children for Covid and have comforted terrified parents, seemed eager to act.

“There are so many parents who are absolutely desperate to get this vaccine,” said Dr. Jay Portnoy, a professor of pediatrics at the University of Missouri-Kansas City medical school. “I think we owe it to them to give them the choice.” 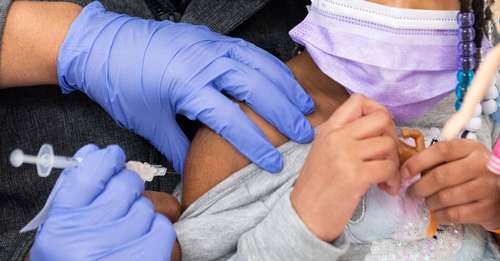 Dr. Arthur Reingold, an epidemiologist at the University of California, Berkeley, School of Public Health, said the nation already vaccinates children against diseases “where the risk of a child dying or being hospitalized of those diseases was pretty close to zero.”

The C.D.C.’s own panel of vaccine experts is set to take up the matter over two days this weekend. If that committee also gives a favorable recommendation, Dr. Rochelle P. Walensky, the agency’s director, would issue her decision, the final step in the process.

Neither vaccine has been tested against new subvariants that are circulating in the United States. The clinical trials were largely conducted when the Omicron variant prevailed. Two subvariants, BA.4 and BA.5, could become dominant within a month.

The virus is evolving so fast that some panelists expressed fear that the clinical trial results on which their decisions were based were already outdated. “We’re really trying to predict the future,” Dr. Paul Offit, a vaccine expert with the Children’s Hospital of Philadelphia and an F.D.A. panelist, said in an interview. “This is a problem.”

But the panel’s biggest worry seemed to be whether Pfizer’s three-dose vaccine, which it developed with its German partner, BioNTech, was effective enough. Pfizer has reported that two doses of its vaccine were only about 28 percent effective in preventing symptomatic disease; Dr. Susan Wollersheim, an F.D.A. reviewer, said the company’s data did not clearly show that two doses drove down the incidence of Covid.

Pfizer argued that three doses were 80 percent effective, but the finding was based on only 10 cases out of a subset of 1,678 trial participants. Dr. Doran Fink, a senior F.D.A. vaccine regulator, cast doubt on the company’s estimate, describing it as “preliminary” and “imprecise.”

He said the F.D.A. was “very confident” from the immune response data that Pfizer’s vaccine, like Moderna’s, met the criteria for emergency use authorization, which requires that benefits outweigh risks. But some panel members were clearly worried that parents might be misled.

Dr. Amanda Cohn, a top C.D.C. official and panel member, said she did not have “any idea” what the efficacy rate after three doses of Pfizer will end up being, and that officials should not embrace the 80 percent estimate.

Jeannette Y. Lee, a biostatistician at the University of Arkansas for Medical Sciences, raised another concern: that some parents might skip the crucial third dose for their children. “As we know, it’s a struggle to get people in for two,” she said.

Pfizer officials said the data showed the vaccine’s effectiveness built over time. “It’s not as if there’s no efficacy at all,” Dr. William C. Gruber, a senior vice president at Pfizer, said.

For some parents, the bar is low. Some of the more than 1,600 parents who responded a New York Times query about life with an unvaccinated young child said they would accept any efficacy above zero to give their children some protection.

“To keep her safe from illness and potential death or lifelong hardship? Why is this a question?” wrote Cayla Miller, a mother in Swanville, Maine. “We’ve been waiting so long to protect our whole family. I’ve nearly lost my job and my mind trying to keep her safe.”

Scientists and federal officials have warned against directly comparing the Moderna and Pfizer vaccines. Not only did the companies conduct their clinical trials at different times, with different populations, but the dosing and regimens differ.

Dr. Wollersheim of the F.D.A. declined to answer when one panelist asked for a comparison of the vaccines’ effectiveness in young children. But as some parents will likely do, some panel members tried to do their own matchup.

Even though protection against symptomatic infection was limited, he said, it was possible to predict that Moderna’s vaccine would ward off severe disease.

“I’m not so sure you can predict that with Pfizer’s vaccine,” he said. “I fear that they may have under dosed.”

Both vaccines provoked levels of neutralizing, or virus-blocking, antibodies among children comparable to those in younger adults. Pfizer’s vaccine has been authorized for children 5 to 15 since last year, and regulators said it helped prevent hospitalization and deaths.

Still, both appear significantly less effective against symptomatic infection than the adult vaccines when they were introduced 18 months ago. The F.D.A. said that was because Omicron proved far more adept at evading the vaccines’ defenses against infection than previous versions of the virus.

Given evidence of waning potency over time, the FD.A. has said that young children who get Pfizer and Moderna shots will likely require booster shots, just as older recipients have. That would mean Pfizer’s vaccine could wind up as four doses, while Moderna’s could be three.

Neither vaccine provoked serious safety concerns. The vast majority of side effects were mild — irritability and crying, sleepiness, fatigue and loss of appetite. Recipients of Moderna’s vaccine appeared more likely to experience fevers, but in line with those provoked by other pediatric vaccines, the F.D.A. said.

Federal health officials have said they expect many children under 5 to be vaccinated by pediatricians and primary care physicians, a contrast to older age groups. But the uptake is expected to be low; children aged 5 to 11 became eligible to be vaccinated late last year, but only about 37 percent of them have gotten at least one dose.

Doses are packaged by the hundred to reach smaller practices and rural locations. The Biden administration has also advertised a network of other locations that would work to reach families, including pharmacies and children’s hospitals, while groups such the Association of Children’s Museums and the National Diaper Bank Network will help with education efforts.

One topic of discussion among the F.D.A. panel members was how to address the many parents whose children already have acquired some natural immunity. Federal health officials presented data to the committee this week suggesting that more than two-thirds of children aged 1 to 4 years old have already been infected with the virus.

A Moderna official told the committee that the company’s trial found that young children who had gotten the virus and were vaccinated had greater levels of protection, a conclusion backed by outside research.

Dr. James E.K. Hildreth, a committee member and the president of Meharry Medical College in Nashville, noted that many children had been infected “and have done just fine.”

Are You Happy? Your Boss Is Asking