Cancer treatment in the future could revolve around a Netflix-style algorithm, say scientists. In order to make personalised film and TV series recommendations, the streaming giant gathers data on every user’s viewing history.

This is then run through AI to identify watching patterns, such as favourite genres, how often you watch them and whether you give them a ‘thumbs up’.

Mirroring how Netflix predicts what you’ll want to watch next, experts have created an AI that should predict how a cancer will likely behave.

The tool sifts through thousands of lines of genetic data to look for common ‘faults’ within tumours.

‘But we have demonstrated that there are remarkable similarities in the changes to chromosomes that happen when it starts and how it grows.

‘Just as Netflix can predict which shows you’ll choose to binge next, we believe we will be able to predict how your cancer is likely to behave.’

He added that it could allow doctors to ‘offer better and more personalised cancer treatment in the future’. 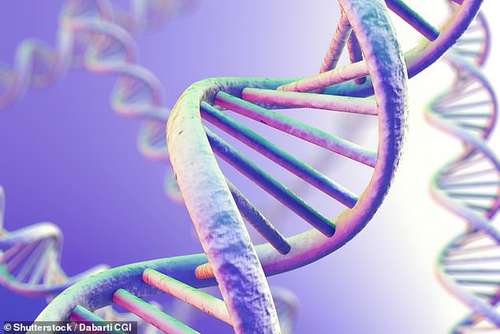 The NHS plans to personalise cancer care and offers genome sequencing to patients if it can help improve their care.

In the same way Netflix predicts what shows a person chooses to watch next, scientists have developed an algorithm that should predict how a cancer will likely behave, based on previous changes in a patient’s genome

HOW DOES CANCER DEVELOP?

Cancer starts in the cells.

Inside almost every cell in the body is a copy of your genome, made of DNA.

The genome can be thought of as the instructions for running a cell. It tells the cell what kind of cell to be — such as a skin cell or a liver cell — and has instructions that tell the cell when to grow, divide and die.

When a cell divides to become two cells, the genome is copied. Usually this happens in a controlled way and is how bodies grow and repair.

But sometimes mistakes happen when copying the genome. These are called mutations.

The mistakes can be caused by natural processes in the cells, by chance, or by external factors, such as UV light or smoking.

Most damage is repaired immediately with no negative effects.

But sometimes the mutations in critical genes means it no longer understands its instructions and multiplies out of control.

The researchers had previously studied how genomic faults occur in sarcoma — a rare cancer that develops in the body’s tissue.

They wanted to find ways to study these changes across different types of cancer.

Around 375,000 new cases are diagnosed in the UK every year, while 1.7million are confirmed in the US.

All types of cancer are caused by mutations to the DNA within cells, which triggers cells to multiply out of control until they form a tumour.

The algorithm will be able to sift through thousands of lines of genetic data from cancerous cells and pick out common patterns.

This should, in theory, allow them to guess how the cancer will develop and where its weak spots will be.

The tool, already tested on nearly 10,000 patients with 33 different types of cancer, has identified 21 common faults. The results were published in the journal Nature.

They have made their software available to other scientists in the hopes that they will use it to ‘build their own Netflix-style libraries of chromosome changes’.

Dr Nischalan co-author of the research, said: ‘To stay one step ahead of cancer, we need to anticipate how it adapts and changes.

‘Mutations are the key drivers of cancer, but a lot of our understanding is focused on changes to individual genes in cancer.

‘We’ve been missing the bigger picture of how vast swathes of genes can be copied, moved around or deleted without catastrophic consequences for the tumour.

‘Understanding how these events arise will help us regain an advantage over cancer. Thanks to advances in genome sequencing, we can now see these changes play out across different cancer types and figure out how to respond effectively to them.’

Trampolines are behind HALF of childhood A&E admissions in UK