A mother who suffered up to 15 mini-strokes a day and was so worried she would die that she wrote a goodbye letter for her baby son says surgery saved her life.

Kate Sippel, 39, from Ohio, initially wrote off early signs as due to being unfit after pregnancy. But after she collapsed at home and was ‘paralyzed for 30 seconds‘ just three months after giving birth to her son, John David, she went to the ER.

Doctors initially put her condition down to struggling with the stress of being a new mother after having a C-section. But Sippel, who works as a veterinarian, sought out other medics who diagnosed her with the rare condition moyamoya, where a narrowing or blockage in arteries at the back of the head limits blood supply to the brain triggering strokes.

Her mini-strokes finally stopped this year after she had an operation to boost blood flow to her brain via an artery in her scalp.

Doctors at the Cleveland Clinic — where she was treated — said it was ‘unlikely’ that pregnancy had triggered her condition. But sufferers can see their condition exacerbated by pregnancy.

Kate Sippel, 39, from Ohio, began suffering up to 15 mini-strokes a day three months after giving birth to her son John David. She is also pictured with husband Fred 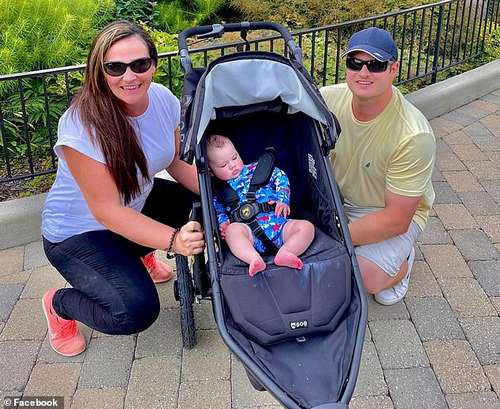 The mother was so worried the strokes would end her life that she wrote a letter to her son for him to read when he was older.

But now that she has had surgery to bypass the blocked artery at the base of her skull, the veterinarian says she has not faced a stroke since (pictured after surgery) 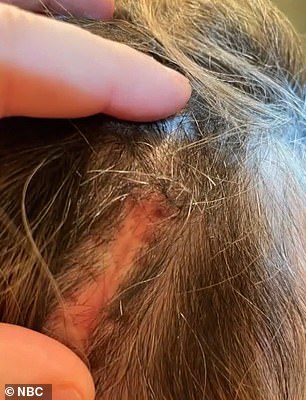 When Sippel first went to doctors they said she was likely only having mini-strokes because she was stressed due to being a new mother. But she refused to take that as an answer 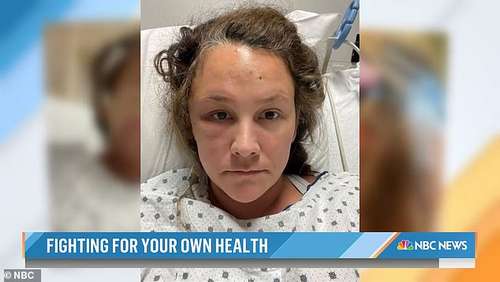 Only about one in a million Americans have moyamoya, which tends to be more common among women, estimates Johns Hopkins medical center.

Medics are not sure what leads to the artery becoming blocked — triggering the condition — although it may be linked to genetics.

Sufferers tend to experience regular mini-strokes alongside headaches, difficulties speaking or understanding others and involuntary movements.

Moyamoya is a condition where blood flow to the brain from arteries at its base is restricted.

This is triggered by a narrowing or blockage of these vessels.

Many patients can be treated with simple blood thinning drugs to boost blood flow.

But in some cases surgery may be required to open another way for blood to flow to the brain.

In these severe cases where this isn’t done the condition could lead to serious brain damage or death.

The disease is rare, with fewer than one in 100,000 Americans being diagnosed.

It is most likely to be detected in early life and among women.

Medics are not sure of the cause, but about one in ten cases may be down to genetics.

In many cases it can be treated through taking blood-thinning drugs to make it easier for blood to flow to the brain.

But in some patients — including Sippel — it can only be treated through surgery.

Sippel said the first mini-stroke struck when the mother was riding her horse Norwin at a competitive showjumping event.

She told WKYC: ‘All of a sudden it felt like somebody punched me in the face.

‘I was headed right towards a jump and lost all kind of movement or feeling of the left side of my body.’

She was stuck like this as her horse did three more jumps before, suddenly, she went back to how she was before.

Putting it down to being out-of-shape after pregnancy, Sippel initially brushed off the event as a fluke.

But a few weeks later she collapsed at home and ‘couldn’t get back up’ for as long as 30 seconds.

Just 24 hours later it struck again while her husband Fred was driving the family around.

She told TODAY: ‘The only thing that came out of my mouth was garbled noise. I couldn’t speak, I couldn’t move my mouth, my tongue, anything.’

Spooked by the events they went to an emergency room doctor in July 2021, who said it was most likely due to the stress of motherhood and discharged her.

But Sippel was so worried about the strokes — which she had never experienced when stressed before — that she feared she could die, prompting her to write a letter for her son when he was older.

Tears filling her eyes, she read out the message saying: ‘I want to be there to give you so much advice and hug and kiss you every day. I am sorry I can’t be.

‘I hope this is all for nothing and I will be able to grow old and tell you all of those things in person. I love you. Your mum.’

Next she went to see a neurologist who — following an MRI scan — diagnosed her with mini-strokes, or transient ischemic attacks triggered by moyamoya.

Sippel said the first stroke happened when she was riding her horse during a showjumping competition. She initially put it down to her losing fitness due to being pregnant 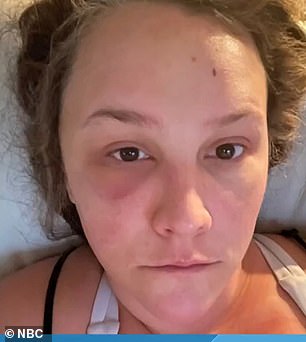 The mother is pictured above shortly after surgery. Blood flowing down the blocked artery has now been re-routed to pass through her scalp 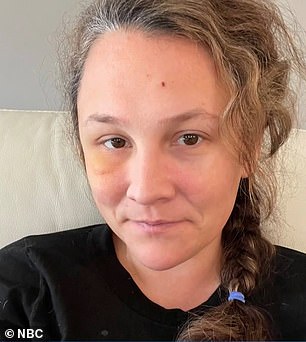 In the first instance she was prescribed blood thinners, but continued to have up to 15 mini-strokes a day.

The doctors said it was safe to have two to three of these strokes – which rarely trigger brain damage — a day, but that they would check back in six months.

But Sippel again started looking around for another doctor, and was eventually admitted to the Cleveland Clinic in Ohio for treatment.

There doctors carried out cerebral bypass surgery, where they made a small incision on the left side of her head and isolated the section of an artery that was blocked. It was then re-routed via another artery in her scalp.

She was discharged two days after the operation and has not had another stroke since.

Dr Mark Bain, the neurosurgeon who did Sippel’s surgery, explained milder forms of moyamoya can be treated with aspiring and other blood-thinners.

But because Sippel was experiencing frequent strokes and related symptoms, she faced the possibility blockages could worsen — which could lead to a full-blown stroke.

He said: ‘When the brain gets enough blood flow, it reduces the number of wispy immature blood vessels that could cause bleeding in the brain. It’s pretty amazing what the brain can do.’

Asked by DailyMail.com whether Sippel’s condition was linked to childbirth, he said: ‘The condition is unlikely to be related to pregnancy.’

What can stop me waking up feeling so anxious every day?

From raw to dried, we reveal the best way to have your apple a day