In its first report, a team of international scientists assembled by the World Health Organization to advise on the origins of the coronavirus said on Thursday that bats likely carried an ancestor of the coronavirus that may have then spilled over into a mammal sold at a wildlife market.

But the team said that more Chinese data was needed to study how the virus spread to people, including the possibility that a lab leak played a role.

The team, appointed by the W.H.O. in October as the organization tried to reset its approach to studying the pandemic’s origins, said that Chinese scientists had shared information with them, including from unpublished studies, on two occasions. But gaps in Chinese reports made it difficult to determine when and where the outbreak emerged, the report said.

Independent experts said it was unclear how the team, comprising scientists from the United States, China and two dozen other countries, could help the W.H.O. break through the political barriers in China that have stalled the publication of most information that would place the virus’s emergence within the country’s borders.

“The lack of political cooperation from China continues to stifle any meaningful progress,” said Lawrence Gostin, who directs the O’Neill Institute for National and Global Health Law at Georgetown University. He said that the report offered a road map for investigating future pandemics in less secretive countries.

The W.H.O. asked the group for advice not only on studying the coronavirus’s origins, but also on examining the emergence of future pathogens. The team, known as the Scientific Advisory Group for the Origins of Novel Pathogens, has no authority to undertake inquiries in China or elsewhere.

Maria Van Kerkhove, the W.H.O.’s Covid-19 technical lead, said the report was “just the start of their work.”

The group was expected to indicate more openness to a lab leak than a previous team that the W.H.O. sent to China in early 2021. That earlier team’s joint report with China said that a lab leak, while possible, was “extremely unlikely.” The W.H.O.’s director general, Tedros Adhanom Ghebreyesus, called that assessment premature. 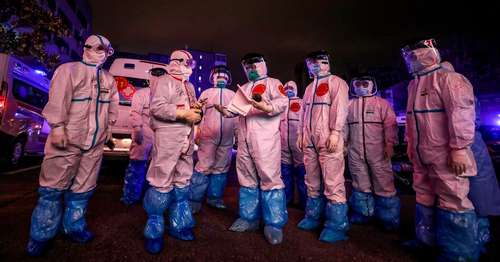 The latest report said that no new data pointed to a lab leak. But leaders of the group said that they wanted to evaluate any evidence that emerges in the future.

“We haven’t received any reports that really indicate that there is a lab leak that we feel is strong to follow up on,” said Marietjie Venter, the team’s chairwoman and a professor of medical virology at the University of Pretoria in South Africa.

Efforts to study a lab leak met resistance from team members from China, Russia and Brazil, who did not see the need for such investigations, the report said.

The report mentioned a number of studies into the potential role of animals in the emergence of the coronavirus that had been published since the previous W.H.O. team’s work. For example, a survey of a live animal market in Wuhan, China, indicated that several species known to be susceptible to the coronavirus were present in the fall of 2019.

Once people linked to that market started becoming sick, the police shut down and disinfected the facility, making it more difficult for scientists to identify potential intermediate animal hosts for the virus.

The latest report said that it was focusing on published, peer-reviewed studies, though it acknowledged a number of unpublished studies posted online as “pre-prints.” Among them were two papers released this year, in which a team of scientists argued that the pandemic arose when a bat infected a wild animal, such as a raccoon dog, which was then sold at the Huanan Seafood Wholesale Market in Wuhan.

Michael Worobey, an evolutionary biologist at the University of Arizona who helped carry out those studies, said it was unfortunate that the W.H.O. team did not look closely at the unpublished research.

“I think if you read our pre-prints and understand the evidence,” he said, “actually there’s very strong evidence that the pandemic emerged through wildlife at the Huanan market.”

Dr. Worobey and other researchers said that a vital opportunity was lost in January 2020 to focus a search for the coronavirus on wildlife farms that supplied markets like Huanan. Instead, millions of animals were reportedly culled.

Filippa Lentzos, a biosecurity researcher at King’s College London, praised the latest report for noting the lack of published findings from China’s own origin studies. But she said that its proposals for future pandemic origin studies did not adequately account for investigations into “accidental or deliberate events,” which she said would require expertise outside of public health.

Jesse Bloom, a virologist at the Fred Hutchinson Cancer Research Center, said that the report made clear that mitigating future pandemic threats required considering both animal and laboratory origins.

“Both of these things are sufficiently serious possibilities that they need to be thought about together,” he said.

The report recommended studies of blood samples from workers at wildlife farms and live animal markets and of genomic data from early viral samples. But the previous W.H.O. team had proposed some similar studies, to no avail.

The latest report said that Dr. Tedros wrote Chinese officials twice in February requesting information on the status of those studies as well as information on a potential lab leak. But there was no indication that the W.H.O. would be able to persuade China to share the results of any such work.

Despite the difficulties, however, some information from China has trickled out.

“These sample sizes are not large enough,” said Maciej Boni, a virologist at Penn State University. “We need sampling done on the scale of tens of thousands of bats to get a complete picture.”

So why is hay fever so bad this year?

Medication Abortions Are Increasing: What They Are and Where Women Get Them