More than £100million was spent on prescribing common drugs like paracetamol last year, despite them being available for pennies on the high street.

Official data also shows the NHS in England spent thousands on illicit substances like cocaine for use as an anaesthetic.

It comes just a day after Health Secretary Sajid Javid promised that ‘every pound’ in the NHS will be ‘well spent’ going forward.

In total the NHS spent £9.69billion on prescription drugs in England for the 2021/22 financial year.

That’s despite the health service banning GPs and other prescribers from dishing out medications which patients themselves can buy cheaply in shops since 2018.

Think-tanks today said taxpayers will be dismayed by the NHS’s ‘wasteful’ spend on ‘pointless prescriptions’ in light of the recent national insurance tax hike.

Paracetamol made up £73.7million of the spend, being prescribed over 16million times, at about £4.50 a pack — roughly 15 times the price of a pack of paracetamol at supermarket Tesco.

This chart shows how NHS spend on drugs has steadily grown over the past eight years  reaching a total of  £9.69 billion in 2021/22. This is despite the NHS vowing to ban prescribing over-the-counter medication

At a glance, how much did the NHS spend on common drugs?

Common painkiller paracetamol was prescribed 16million times to the cost of £73.7million.

Aspirin, which can be used a painkiller or as a preventative medicine for heart attacks was prescribed 20.8 million times and cost £25.2million. 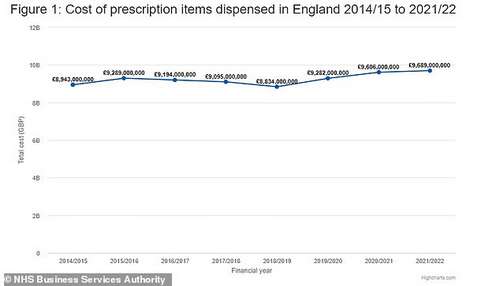 Ibuprofen, prescribed a painkiller for musculoskeletal and joint diseases cost the taxpayer £12.6 million and was prescribed almost 3.5 million times.

Packs of all three of these drugs can be bought for less than £1 at British supermarkets.

Viagra, a medication for erectile dysfunction, cost the taxpayer £6.8 million for 3.3million doses.

At £2.06 a dose this is actually cheaper than many pharmacies which can charge about £4.25 though the price varies.

The NHS also paid more than £12.6m for Ibuprofen in the last year.

Per pack, the cost was 12.5 times higher than Tesco’s own-brand.

The health service also spent £6.8million on prescribing Viagra, despite the blue pill becoming an over-the-counter medication in 2018.

TaxPayers’ Alliance chief executive John O’Connell said the public would be dismayed at the ‘wasteful’ cost of prescription of drugs that could be bought cheaper at a supermarket.

‘Taxpayers are fed up of paying over the odds for pointless prescriptions,’ he said.

‘As households contend with a national insurance hike, there can be no excuse for doctors prescribing treatments which cost pennies over the counter.

‘Now more than ever, the NHS must tackle waste and focus resources on frontline healthcare.’

Both drugs are rarely used by the NHS for medicinal purposes with cocaine used as part of a medical grade mouthwash for oral inflammation and ketamine as a high-strength painkiller.

The total NHS spend on prescriptions of £9.6billion was a rise of £83.7m (0.87 per cent) compared to the previous year’s total spend.

High blood pressure medication Atorvastatin was the most prescribed drug in England, being dispended 53.4million times.

Anti-blood clot drug Apixaban was the most expensive individual medication, costing a total of £401m despite only being prescribed 8m times.

The NHS banned the prescription of over-the-counter medications like eye drops, laxatives, sun creams, paracetamol and anti-dandruff shampoo in 2018 in an attempt to save the cash-strapped health service £100million per year.

However, as today’s figures show, prescription of some over the counter medications remains high.

Critics of the move to ban the prescription of some items said poorer households would be the most impacted by the changes and some families could be forced to go without basic medications.

Yesterday Mr Javid, who is under massive pressure to make the struggling NHS more efficient, has promised that ‘every pound’ will be ‘well spent’ going forward.

His comments come as the NHS, which gets £136billion of taxpayer cash every year, is also getting an extra £12.5bn per annum until 2024, funded by a controversial national insurance hike of 1.25 per cent.

An NHS England spokesperson said paracetamol should not be routinely prescribed to save the health service money, but they added medics can still do so in certain circumstances.

‘NHS England has advised that paracetamol should not be routinely prescribed, in order to free up tens of millions of pounds, to be reinvested in patient care,’ they said.

‘Doctors can still prescribe over the counter medicines in exceptional circumstances as only the Department of Health and Social Care can blacklist drugs and treatments.’

Roe v. Wade and Birth Control: What to Know About Access and Options

Medication Abortions Are Increasing: What They Are and Where Women Get Them