Pat Cullen, general secretary of the Royal College of Nursing (RCN), said a pay rise below the current rate of inflation this summer would be ‘another pay cut’ for nurses

Nurses need an inflation-busting pay rise if the NHS is to ‘stand a chance’ of fixing its staffing problems, the country’s biggest nursing union demanded today.

The number of nurses leaving the profession increased for the first time in recent years in 2021/22, when more than 25,000 quit.

Nurses, paramedics and GPs in England were awarded a three per cent pay rise in 2021 for their efforts during the Covid pandemic and there are talks of a similar rise this year.

But Pat Cullen, general secretary of the Royal College of Nursing (RCN), said this would effectively be a ‘pay cut’ for nurses due to rising inflation.

She told the union’s annual conference today: ‘If they want to stand a chance of improving staffing levels and rewarding nursing skill, the award needs to not just match inflation but go five per cent above it.’

Governments across the UK are due to announce the next round of NHS pay awards in the coming days.

An RCN survey of more than 20,000 nurses found that just a quarter of shifts had the planned number of nurses working, with 75 per cent of shifts having at least one or more too few nurses

Why are nurses and midwives leaving the profession?

Of theses 5,927 British trained nurses told the NMC why they were leaving and these were the top reasons:

Retirement: 49.3 per cent
Change of personal circumstances: 23.2 per cent
Too much pressure at work: 20.1 per cent
Negative workplace culture: 14.3 per cent
The Covid pandemic: 11.5 per cent

Speaking today at the RCN’s annual congress in Glasgow, Ms Cullen said nurses are ‘frightened’ about making ends meet during the cost-of-living crisis.

She said: ‘When the cost of living is soaring, I know how frightened you are.

‘People are choosing between heating and eating, and it’s not even winter. 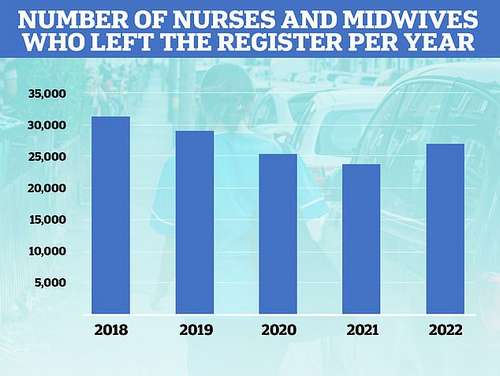 ‘People are doing their community rounds by bus because they cannot fill the car.’

She added: ‘We should never be embarrassed for asking to be paid decently and appropriately.

‘When ministers make their announcements this summer, anything below the current level of inflation is another pay cut.

‘If they want to stand a chance of improving staffing levels and rewarding nursing skill, the award needs to not just match inflation but go five per cent above it.’

Inflation rose by 7.8 per cent in the year to April as the economy recovered from the Covid pandemic and Russia’s invasion of Ukraine pushed the global price of energy and gas up.

A total of 27,133 nurses and midwives left the Nursing and Midwifery Council register in 2021/22 – 13 per cent more than the year before and bucking a recent decline

More than 750,000 nurses and midwives are registered to work across Britain, according to the Nursing and Midwifery Council.

But around 27,000 left the register in the year to March 2022 — 13 per cent more than one year earlier. Most were retiring but one in five cited ‘too much pressure’.

It comes as an RCN survey of more than 20,000 nurses found 83 per cent believe there are not enough nurses on their last shift to meet all patient needs safely and effectively.

Just a quarter of shifts had the planned number of nurses working. And less than a fifth of nurses said they had enough time to provide the level of care they would like.

Ms Cullen told the conference today: ‘Nursing staff are being driven out by the current way of working — the shortage of staff and too often the poor culture.

‘To those from Government listening to my words — we’ve had enough. The patients and those we care for have had enough.

‘We’re tired, fed up, demoralised, and some of us are leaving the profession because we’ve lost hope. Do something about it — we’re not going away.’

The Government previously offered nurses a 1 per cent pay rise which was described ‘a slap in the face’ to the profession.

But ministers later upped their offer to 3 per cent, in what was described as being in recognition of staff efforts in the pandemic.

Police officers and teachers had their wages frozen.

The Department of Health and Social Care made funds available for a similar pay rise this year, pending confirmation from pay review bodies.

The rise was originally planned for April 1, but the agencies are not expected to make their recommendation until later this summer.

Nurses previously claimed they would support striking over the ‘unacceptable’ 3 per cent pay rise offer.

F.D.A. and Abbott Reach Agreement on Baby Formula to Try to Ease Shortage