Sixteen years ago, my husband’s brother, James, took his own life. He was 21, a student at Newcastle University and, growing up, he had never shown any obvious signs of depression or mental illness. He was fun, sporty, kind and popular. Many have said he was a golden boy.

Following a minor operation in December 2006, he sought help for anxiety and suicidal thoughts. Later that week, while back in Newcastle, James went to an NHS walk-in centre and was then referred to A&E as a low priority.

The urgent treatment he needed was either misunderstood or simply unavailable. And yet, the Government’s statistics at the time showed — as they do still — that suicide is the leading cause of death in men under 50, affecting three times as many men as women. (The latest figures show that in 2020 there were 5,224 suicides in total in England and Wales, 3,925 of which were men.)

James left A&E without being seen. A letter was sent from the NHS to his family GP by second-class post to the wrong postcode. By the time it arrived, James had already taken his own life, ten days after the operation.

This tragedy turned the family’s life upside down and they vowed to do something to prevent others from going through it.

It became very clear to James’ parents, Nick and Clare, that their son’s death could have been avoided. Fuelled by grief, they formed a charity, James’ Place, which supports, advises and helps men in suicidal crises with individual therapy.

When I visit James’ Place in the centre of Liverpool, writes Cressida Bonas (right) I witness the impact of its important work first-hand. I meet Derek Wilson (left) and his family. His story shows how the charity is preventing suicides, and the damage suicide does to families

The first centre was opened by Prince William in Liverpool in June 2018. Last month, he visited a second facility, modelled on the first, which opened in East London.

Clare, who has worked tirelessly on the project, says: ‘I thought about what type of intervention and service might have helped James. I researched existing non-clinical models in both physical and mental health, took the best elements from each of them and formulated the idea of a non-clinical calm space, but manned by fully trained therapists who could give the best possible treatment.’ 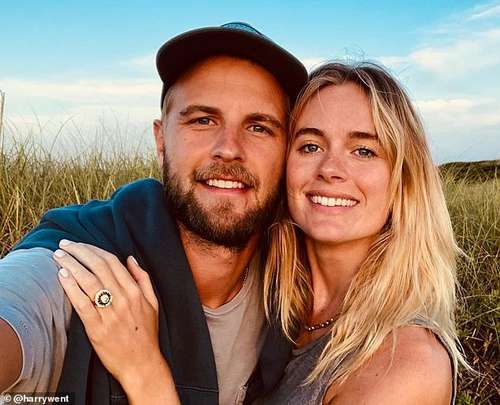 Entirely charitably funded, James’ Place is a non-residential space open to any man over the age of 18 who is suicidal. The CEO, Ellen O’Donoghue, says they see men ‘from all walks of life, and we know that the experience of suicidal crisis is universal’.

So far, the charity has worked with more than 800 men, saving many lives.

When I visit James’ Place in the centre of Liverpool, I witness the impact of its important work first-hand. I meet Derek Wilson and his family. His story shows how the charity is preventing suicides, and the damage suicide does to families.

Pictured: Cressida Bonas with her husband Harry Wentworth-Stanley, both 33

Born and bred in Liverpool, Derek, 58, is ‘a big Liverpool supporter’, he tells me with a grin. I’m struck by how cheerful he is. Having worked for Liverpool City Council for 35 years, he says he was suspended for 12 months after a simple mistake relating to new building regulations. This was months before Covid started to sweep through the UK.

Being suspended ‘was the trigger’, says Derek. Feelings of shame overwhelmed him and he spiralled: ‘I thought, where am I going to get a job, I’m the breadwinner. I’m worthless . . . I’m better off dead.’

Fearing that he would no longer be able to provide for his family played a big part in Derek’s crisis. 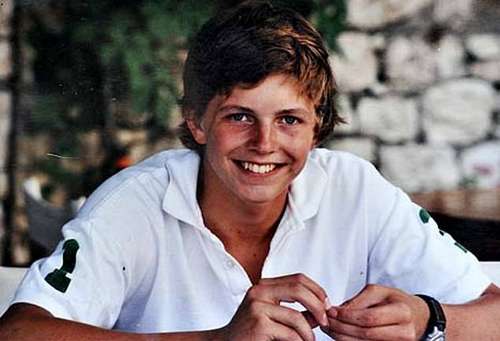 Sixteen years ago, my husband’s brother, James (pictured), took his own life. He was 21, a student at Newcastle University and, growing up, he had never shown any obvious signs of depression or mental illness

Dan Bracken, a psychotherapist and head of James’ Place London, explains: ‘There are many complex reasons why men come to us in a suicidal crisis and often it relates to what they and society expect of them as men.’

Although Derek comes from a loving family, his dad was an alcoholic and was sometimes violent. ‘I wasn’t at the age where I could help my mum,’ he says. He looks back and wishes he could have done something more to intervene.

Then his sister married someone similar (she later died from cancer).

‘I tried to protect her, but I couldn’t,’ he says. For years, Derek’s pent-up feelings of guilt and anger had no outlet. ‘It’s like a pressure cooker and if you lock down a pressure cooker it’s just going to blow, and that’s what happened to me.’

Derek’s daughter, Sophie, 24, tells me her dad became very withdrawn. ‘After being someone who was the life and soul of the party, he suddenly didn’t want to be around anyone,’ she says. ‘And he started to lose his temper.’

Sophie describes ‘a black cloud that got darker and darker . . . he was blank, when having a conversation with him it was like he wasn’t there’.

Derek’s wife, Sarah, 47, who works for the city council, says they never had silences between them until he was suspended. When she tried to broach this with him, ‘the barriers went up’, she says.

Derek didn’t think he needed help, but he stopped speaking with friends and gradually shut the world out. None of his family realised the severity of his decline, nor could they have anticipated what would happen one day in October 2019.

‘It started as a normal day doing some DIY,’ says Derek. But after assembling a new wardrobe only to find it didn’t fit in the room, he lost his temper and threw it down the stairs. He was mortified that his son, Liam, then 15, was watching. ‘I went out to calm down and got in my van,’ he says. 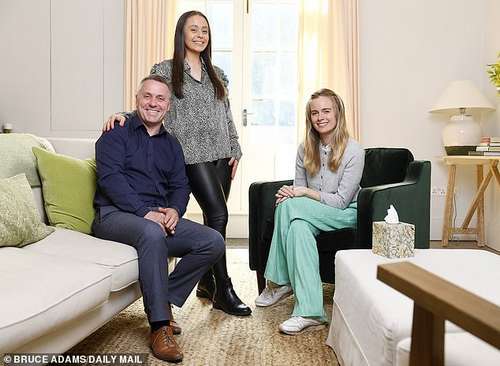 Derek hadn’t planned to kill himself, but the thought came to him after he left the house: ‘I went to an area I know very well. An area where no one ever goes.’

But, in a twist of fate, a little girl and her dad walked past him. The man looked at him with an expression that said: ‘Have I just seen correctly?’ As they left, ‘the little girl smiled at me’, says Derek.

The idea of what she could have seen, had he done what he’d planned, is haunting. Now, when Derek notices someone looking down, he says he will ask them how they are and if they are OK.

Derek stayed in the van for two or three hours. During this time, Sarah texted to see where he was because she ‘had a niggle that something wasn’t right’. The message she received back read: ‘I’m really sorry about today, it’s like a switch has gone in my mind. I love you all, tell the kids I love them, but I can’t carry on like this.’

Frightened and in disbelief, Sarah phoned the police. Then she went looking in all the places she thought he might be, but she couldn’t find him.

In the end, Derek decided to go home: ‘I thought, I’ll come back later and do it when it’s dark.’

But when he got home, there was a police car parked outside. Inside he collapsed on the floor and said: ‘You have to take me somewhere.’

One of the major issues with mental health is that people often don’t know how to access the appropriate services: ‘We didn’t . . . where do you even start, where do you go?’ Sarah says.

The police contacted NHS mental health services, who sent a practitioner to the house. She said that unfortunately there was a waiting list for therapy. 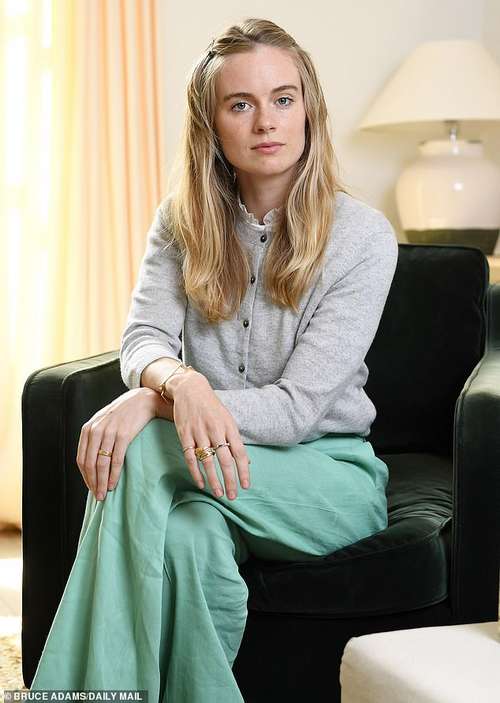 ‘James’ Place exists to meet the need for urgent care for men in suicidal crisis, and this is one of the reasons we work so closely with partners in the NHS, and more widely,’ says Ellen O’Donoghue.

‘It means we can build referral pathways to make sure that men reach us quickly and safely when they need help.’

This feels all the more powerful knowing how my husband’s family always felt that if they could save one life in James’ name, it would mean that his death was not in vain

Derek was lucky that a friend of Sarah’s gave him the number for James’ Place. He was doubly fortunate to have his close family for support. He admits: ‘If I hadn’t got help from James’ Place, I would have gone out the next day and killed myself.’ He describes walking into the centre as a ‘relief’.

The usual intervention is six to eight intensive therapy sessions over two months. Derek was seen for eight weeks.

He says he was enormously helped by the James’ Place ‘Lay Your Cards on the Table’ cards. Created by Jane Boland, clinical lead and head of the Liverpool centre, they are used to help structure the therapy.

On the cards are phrases such as ‘I feel trapped’. Jane explains this allows men ‘to acknowledge some of the horrible things they haven’t been able to say to anyone.

‘For many men this will be the first time they can understand the relationship between their thoughts, feelings and actions,’ she says.

Thanks to James’ Place, Derek is now able to understand how he reached that low point. ‘Most of it was from things that happened in the past,’ he says.

In his new building construction job, he makes sure he asks his work colleagues, ‘Are you OK?’ And he always asks twice. After seeing him at his lowest point, Sophie tells me: ‘He’s now a completely different person and he loves life.’

And how have Sarah and Sophie changed? Sophie smiles. ‘I’m enjoying life . . . every day is a bonus.’ She says emphatically: ‘Every city needs a James’ Place.’

There are plans to open centres in another three cities over the next three years.

Sarah touches her heart as she tells me: ‘From right deep in here, I know James’ Place is why I’ve still got a husband, and why my children still have a father. It saved not only Derek’s life, but ours.’

And this feels all the more powerful knowing how my husband’s family always felt that if they could save one life in James’ name, it would mean that his death was not in vain.

What a Gene and Its Risks Could Mean for Kidney Transplants