Another 50 monkeypox cases have been recorded in Britain. Health chiefs said 46 of the new infections were in England, with three more in Scotland and one in Wales.

The UK has now logged 574 cases over the past six weeks, mainly in gay and bisexual men. It is the biggest outbreak outside of Africa to date.

Authorities are desperately to contain the tropical virus, amid fears it could become endemic in Europe.

Dozens of countries have been hit by the current outbreak, including the US, Spain and Portugal. No deaths have been confirmed yet.

Officials warned people to be wary of symptoms — including tell-tale rashes or blisters — especially ahead of summer festivals and events.

WHO will rename monkeypox after scientists claimed its name is racist

Monkeypox will be renamed following calls for a new ‘non-discriminatory and non-stigmatising’ term, it has emerged.

The World Health Organization (WHO) promised a new name for the rash-causing virus, endemic to Africa, would be announced ‘as soon as possible’.

As well as renaming the actual pathogen itself, strains will likely be lettered, such as A or B, to remove any mention of the parts of Africa where they were first spotted.

Over 30 researchers last week signed a position paper stating there was an ‘urgent need’ to change its name given the current outbreak, which has mainly struck gay and bisexual men. 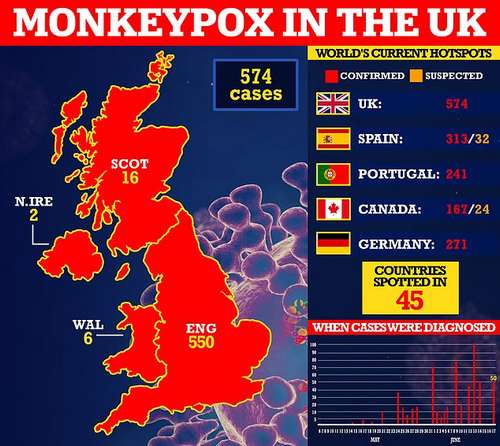 It has already swept the world to strike 45 countries, including Britain, the US, Spain and Portugal.

They wrote: ‘Continued reference to, and nomenclature of this virus being African is not only inaccurate but is also discriminatory and stigmatizing.’

Dr Tedros Adhanom Ghebreyesus, head of the WHO, has confirmed the virus will be renamed.

Dr William Welfare, incident director at UKHSA, said: ‘As case numbers of monkeypox continue to rise and with many summer events and festivals ahead, we’re reminding people to be aware of the symptoms of monkeypox.

‘Particularly if you’ve recently had new or multiple sexual partners, to help prevent further spread and protect others.

‘If you have a rash with blisters, or any other monkeypox symptoms, don’t go to events, meet with friends or have sexual contact.’

‘Instead, stay at home and contact 111 or your local sexual health service for advice. Please contact the clinic ahead of your visit and avoid close contact with others until you’ve been seen by a clinician.

UKHSA bosses are trying to raise public awareness of monkeypox ‘so everyone has a safe, happy and healthy summer’. 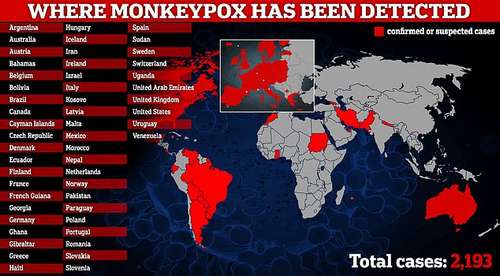 As part of efforts to thwart the outbreak, all confirmed cases and their close contacts are offered the Imvanex jab, which is thought to be around 85 per cent effective at stopping infections.

The strategy, known as ring vaccination, has been used in the past and is proven to work.

Authorities have yet to widen out the vaccination strategy but leading scientists have suggested the next step could involve a targeted rollout to gay and bisexual men.

People who test positive are advised to isolate for 21 days, which his how long it can take for symptoms to fade.

They can leave isolation early if their scabs dry and fall off.

Patients are advised to wear condoms for eight weeks post-infection.

The UKHSA advises Britons to contact their sexual health clinic if they have a rash with blisters and have been in close contact with a suspected or confirmed monkeypox case or have been in West or Central Africa in the last three weeks.

Officials said they have linked the outbreak back to ‘gay bars, saunas and the use of dating apps in the UK and abroad’.

Monkeypox is not normally a sexually-transmitted infection, but it can be passed on by direct contact during sex.

It can also be spread through touching contaminated clothing, bedding or towels.

The disease, which is similar to smallpox, is usually mild but kills up to 10 per cent of patients.

Current outbreaks are being driven by the least severe strain detected, which has a fatality rate closer to one in 100 — similar to when Covid first hit.

A rash can develop, often beginning on the face, which then spreads to other parts of the body including the genitals.

World Health Organization chiefs are going to change the name of the rash-causing virus, it was announced this week.

It followed calls from a coalition of scientists for a new ‘non-discriminatory and non-stigmatising’ term.

As well as renaming the actual virus itself, strains will likely be lettered to remove any mention of the parts of Africa where they were first spotted.

The WHO will also hold an emergency meeting next week to determine whether to classify the global outbreak as a public health emergency of international concern.

Only six PHEICs have been declared in the past, with the most recent being Covid.