A mother has provoked a debate over whether it’s ever acceptable to express concern over a loved one’s weight after asking for advice abvout her adult daughter.

Taking to the British parenting forum Mumsnet, the concerned mother said her daughter has struggled with her weight and is now the ‘heaviest she has ever been’, but denies she’s got any bigger.

‘I’m so worried for her future health. She has small children,’ the woman explained. ‘At the rate she’s growing she’ll end up on a mobility scooter.

‘She needs to do something for her children’s sake and her own future health. I don’t want to upset her though as she’s a grown up – but she’s still my child.’

Commenters were fiercely divided with many insisting that her daughter is the only one who can make changes and pointing out that she’s overweight will just make things worse.

Taking to the British parenting forum Mumsnet, the concerned mother asked what to do, saying her daughter is now the ‘heaviest she has ever been’, but denies she’s got any bigger (stock image)

However, others argued that loved ones wouldn’t stand back if someone was addicted to alcohol or drugs, as well as pointing out the impact it has on children.

Explaining the situation, the worried mother wrote: ‘I’ll probably get flamed for fat shaming, but this is my adult child I’m talking about and I’m worried.

‘When she hit puberty she started to become chubby. Then she did really well and lost some. 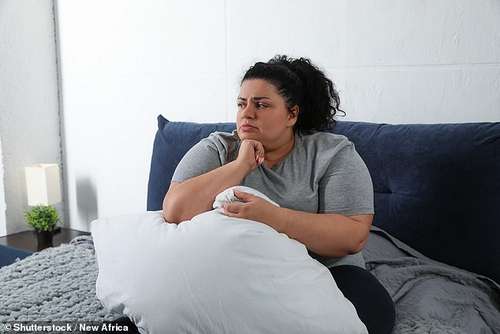 ‘She did have an illness a few years back which was not the cause of this weight gain but prevented her from exercising at all. Now she is over her illness and in a sedentary job, does not exercise and is more overweight than she has ever been.

Commenters urged the mother not to say anything to her daughter, warning that any comments she makes will no be helpful and that the motivation to lose weight has to come from within

‘I have gently mentioned it to her, but she lies to me and herself by saying she’s the same weight. I can see with my own eyes she’s not. I have offered to babysit so she can go to the gym/swimming and pay. But she makes an excuse about being shattered by the time kids go to bed and she has to be up very early for school run & work, which is true.

What do I do? Show her photos of how she was at the end of her illness compared to how she is now? Be brutal about it?’

A flurry of commenters insisted that her daughter is the only one who can motivate herself to lose weight, and argued that advice can have the opposite effect, even if the other person means well.

‘I am very overweight. (16 stone at 5ft 3) I know I am,’ one wrote. ‘I know I need to do something about it but I just can’t seem to find it in me to get motivated. I am an extremely motivated person in all other areas of my life.

‘Nothing anyone says helps, in fact it makes it much worse. So, I know it’s difficult but my advice would be to just ignore it. I know it’s well-intentioned but it will just make her feel worse about herself and less likely to do anything about it.’

Another said she understood the mother’s concern, but agreed that commenting on her daughter’s weight would be counterproductive.

‘I’ve recently lost – and am still losing – weight,’ she wrote. ‘If my mum had said to me at any point that I needed to lose weight or was looking bigger or something I’d have told her to shut the f*** up and been pretty annoyed. I knew. Your daughter knows.

‘Saying anything will just make her feel embarrassed and annoyed and perhaps avoid seeing you.’

Another agreed it could risk their entire relationship, saying: ‘Leave her alone. Unless you want no relationship with her. Ask me one of the reasons I don’t speak to my mother anymore.’

However, others suggested that she offers more practical help so that her daughter has the time and space to make changes.

‘I think you need to forget the weight aspect and think that your daughter is feeling overwhelmed,’ one suggested. ‘If you want to help you could take away some of the load – share the school run, babysit – just to give her a break – don’t suggest the gym or swimming that is for her to decide.’

Another suggested: ‘Could you offer to make an appointment with a nutritional nurse at the GP? Do you live near them? Could going to a class together, like a Pilates or other low impact class help?’

Another added: ‘You don’t need to tell her she’s overweight but I don’t see why you can’t hammer home the importance of her health with young children. You’re her mother, even if she’s an adult, you can express concern for her health.

‘I’d have a conversation but make it solely about health, nothing referencing appearance or looks.’

However, others insisted that they would not beat around the bush with one writing: ‘If an adult child was abusing alcohol or drugs it would be fine to comment

‘If an adult child is abusing food it is a disgrace to comment. Got it.’

‘She’s a young woman who should be in her fitness prime, and it should never be normalised to be obese and knackered.’

‘Gorging on food, incapacitating your body, encasing your organs with visceral fat is a food addiction.

‘Ignoring it, pretending it isn’t happening is beyond stupid.

Some argued that addiction has an impact on other people in a way that being overweight doesn’t, but Mumsnet users were quick to disagree.

‘Obesity does impact others,’ one said. ‘You have to adapt activities and travel arrangements for a start,

‘I wouldn’t dream of saying to go for a 10km walk to my obese friends/relatives, or playing tennis or even going on certain holidays. They are excluded. Like it or not, that’s what happens.

‘Never mind the impact it has on children when your parent is obese.’

A fellow poster echosed the same sentiments, writing: ‘I agree that soneone being very overweight should be treated in the same way as someone being a drug addict or alcoholic – ie, its fine to discuss it, express concern and try to get them help.

My mother-in-law’s obesity has caused the family huge amounts of stress over the last 15 years or so, with her endless weight-related health issues. With a recent diagnosis of heart disease and angina, it now will certainly be what kills her in the end.’

He Spurred a Revolution in Psychiatry. Then He Disappeared

Cancer drug could be ‘game-changer’ in fight against heart attacks