The ‘striking’ results, based on nearly 600,000 women, dispel widespread concerns about the Pill’s effect on mental health.

Thousands of women have shunned the contraceptives over fears they could trigger unpleasant changes in mood, anxiety and depression.

Dr Elena Toffol, who led the University of Helsinki project, said: ‘We set out to verify previous data, so this is not what we expected’.

She described it as ‘good news for contraceptive users’.

As well as the Pill, hormonal contraceptives include the implant, intrauterine system (IUS) and the patch.

Researchers from the University of Helsinki in Finland studied nearly 600,000 women, half of whom were taking hormonal contraceptives and half who were not. Results showed that those not taking the methods of birth control were a third more likely to attempt suicide in comparison to users

WHAT METHODS OF CONTRACEPTION ARE CURRENTLY AVAILABLE?

Contraception aims to prevent pregnancy. A woman can get pregnant if a man’s sperm reaches one of her eggs.

Contraception tries to stop this happening by keeping the egg and sperm apart, by stopping egg production or by stopping the combined sperm and egg attaching to the lining of the womb.

Contraception is free for most people in the UK. The options available include:

Around one in six women aged 15 to 49 in the UK and the US take the Pill — the most popular method of hormonal contraception. 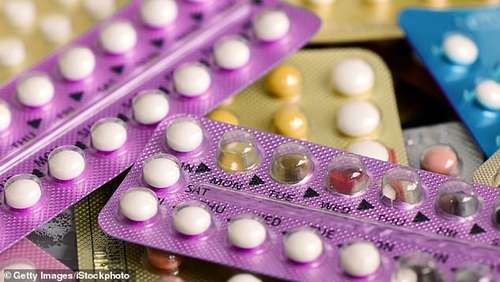 It releases oestrogen and progesterone which disrupts ovulation, the point in the menstrual cycle when a woman is most likely to get pregnant.

The contraceptive patch (stuck to the skin) and the vaginal ring (placed inside the vagina) both also release these hormones and work in the same way.

Other methods of hormonal contraception work by releasing progestogen into the blood stream, preventing ovulation.

These include the progestogen-only pill, an injection, the implant — a plastic rod placed under the skin of the arm — and the IUS, a T-shaped plastic coil that’s put into the womb.

But some women have complained of suffering from poor mental health after using these methods of contraception.

And studies have linked increased rates of mood changes, depression and suicide with the pill and other hormonal methods of birth control.

Scientists have suggested changing levels of these sex hormones, particularly progesterone, impacts areas of the brain that control cognitive functioning and the processing of emotions.

Half of the women in the Finnish study had used hormonal contraceptives for at least six months, while the others had not.

The study, to be presented this week at the virtual European Congress of Psychiatry, only looked at suicide rates between 2017-19.

Analysis revealed non-users, which included women on other forms of contraception, were 37 per cent more likely to attempt suicide.

There were 344 attempted suicides among women using hormonal contraceptives. For comparison, 474 tried to commit suicide who did not take hormonal birth control.

Rates were the same among 15 to 19-year-olds — regardless of whether or not they used hormonal contraception or not.

But suicide rates were lower among hormonal contraceptive users in the 20-24 and 25-29 age brackets, in comparison.

‘Initial reports from 2018 and 2020 had indicated use of hormonal contraceptives was associated with a higher number/risk of suicides and suicide attempts. We set out to confirm this data’.

The researchers noted their data is based on women who redeemed prescriptions for hormonal contraceptives and some may have not gone on to use the drugs.

They plan to study the same cohorts’ health records to determine if hormonal contraception is linked with depression.

Professor Andrea Fiorillo, a psychiatry expert at the University of Campania in Naples, who was not involved in the study, said the findings ‘disconfirms’ earlier research.

He said: ‘Of course, this striking finding deserves a careful evaluation and needs to be replicated in different cohorts of women and controlled for the impact of several psychosocial stressors, such as economic upheavals, social insecurity and uncertainty due to the Covid pandemic.

‘The clinical implications of the study are obvious and may help to destigmatize the use of hormonal contraceptives.’

Almost No Exceptions for Rape, Incest or Health