Drug overdose deaths among black and indigenous Americans spiked in 2020 — with a total of 2,400 more being recorded during the first year of Covid compared to the previous 12 months.

Data revealed by the Centers for Disease Control and Prevention (CDC) from 25 states and the District of Columbia showed among black people fatalities surged 44 percent over the period, marking the biggest jump on record.

For Native Americans they shot up 36 percent, while for people from white backgrounds they went up by a quarter.

Researchers said the higher death rate was being driven by the rising use and manufacture of fentanyl, which is up to 100 times more potent than morphine.

They called on the Biden administration to do more to limit the use and distribution of drugs in the United States.

The President has already promised to start treating overdoses like ‘any other disease’ under his National Drug Control Strategy, which has seen medications to help people with overdoses made more widely available and further work to disrupt chains allowing drugs to be imported into the United States.

The figures were revealed in an early-release report from the Morbidity and Mortality Weekly Report (MMWR), the top medical publication in the country.

Data was compiled from the State Unintentional Drug Overdose Reporting System, where fatalities from taking too many drugs are reported. It only included 25 states because these were the ones to have submitted stats for 2020. 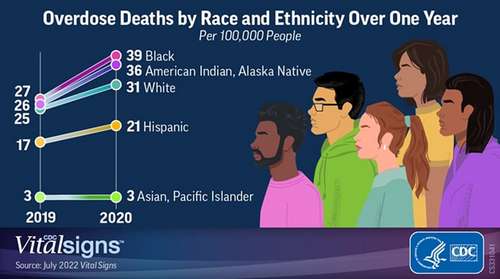 The report confirms previously published papers, which also showed a spike in drug overdose deaths among Black Americans during the first year of the pandemic.

Breaking the results down by ethnic group showed black people had the highest fatality rate from drug overdoses, at 38.9 deaths per 100,000 people.

Native Americans had the second highest (36.4), followed by people from white backgrounds (30.7) and Hispanic Americans (21).

Among the fatalities, they were most likely to report a bystander was present (41 percent), that there was evidence of injection (24 percent) and that a drug to help combat the effects was administered (19.8 percent).

Drug overdose deaths have long been associated with white Americans in Appalachia and the U.S. south, with fatality rates in this group far outpacing others until 2017.

The rates were initially much higher in this group because of over-prescribing of opioids — painkillers — which led many to become addicted and, when they could not get the drugs on prescription, seek them elsewhere.

But they have now risen in Black groups, which some experts say is linked to the street supply of illict drugs becoming ‘more and more toxic’.

This includes the addition of fentanyl to many drugs, like cocaine, meaning many end up unwittingly consuming the potent drug.

In a press conference on the paper Dr Mbabazi Kariisa, from the CDC’s Division of Overdose Prevention who led the paper, called on Americans to help protect others from drugs by reading about overdoses and discussing it with friends.

She also called on people to learn to recognize the signs — typically someone being awake but unable to talk, or their skin turning pale grey — and to carry treatments for someone who has overdosed in their handbags.

The drug Naltrexone is recommended for treating both drug and alcohol overdoses, because it can lessen their effects.

Explaining the rise in overdoses across all groups in the paper, they said: ‘Higher drug use has been reported in areas with more economic distress, which increases the risk for fatal overdose. 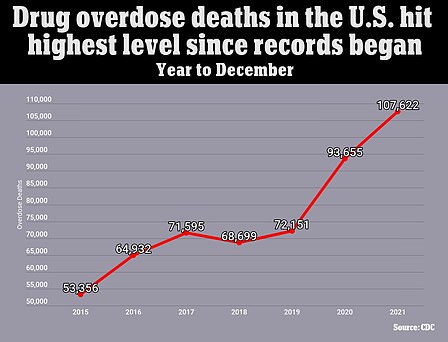 Dr Helena Hansen, a researcher at the University of California, Los Angeles, who previously researched the topic, said Black Americans had a higher rate of drug overdose deaths because of economic disparities.

She told NPR: ‘People who are lower down on the social hierarchy tend to be exposed to fentanyl and other highly potent synthetic opioids at disproportionate rates.

‘[As a consequence], you find black Americans are exposed to fentanyl more often than white Americans.’

‘Overdose deaths are preventable, and we must redouble our efforts to make overdose prevention a priority.

‘We will continue to support and work collaboratively with communities like we do with CDC’s Overdose Data to Action (OD2A). Providing tailored tools and resources to combat overdose and address underlying risk factors will ultimately help reduce health disparities and save lives.’

It comes after a record 108,000 Americans died of a drug overdose in 2021, marking the first time the figure has slipped into six figures.

It was also a 15 percent uptick on the previous year, and the seventh 12-month period in a row where they have risen compared to the previous spell.

The above graph shows the CDC estimates for the number of deaths triggered by drug overdoses every year across the U.S.

Deaths from drug overdoses in the U.S. hit their highest level since records began last year, provisional figures showed earlier this month — with opioids including fentanyl behind nearly three in five fatalities.

The Centers for Disease Control and Prevention (CDC) estimated there were 107,622 fatalities linked to overdoses during 2021, or one every five minutes.

It marked a 15 percent uptick on the previous year’s record of 93,655 drug deaths and the seventh 12-month period in a row where they have risen.

Opioids including fentanyl were linked to the majority of fatalities, or 80,800, followed by psychostimulants such as methamphetamine at nearly 33,000.

It was possible for more than one drug to be linked to a fatality.

Only one state — Hawaii — saw its deaths from overdoses decline last year.