Concerns are being raised about a major flu outbreak this winter in Britain and the US as the virus wreaks havoc in Australia.

Experts have been warning about the potential of an influenza surge throughout the pandemic, with lockdown thought to have weakened people’s immune systems.

So far those fears have not materialised in the northern hemisphere, but Australia is currently in the midst of its worst flu season in years.

Southern hemisphere countries like Australia are seen as the ‘canary in the coalmine‘ because they have their winters earlier in the year.

Australia suffered a record 65,000 flu cases in May, more than double the previous May record of 30,000 in 2019, with diagnoses up almost 300 times than last year in parts of the country.

Children’s hospitals have also seen spikes in paediatric admissions that have forced some to divert ‘less urgent cases’ to other healthcare providers.

Professor Lawrence Young, a virologist at Warwick University, told MailOnline ‘there is a real concern the UK could be faced with a «perfect storm» of respiratory virus infections this coming winter’.

‘Australia really is the «canary in the coalmine» and we should sit up and take notice.’ 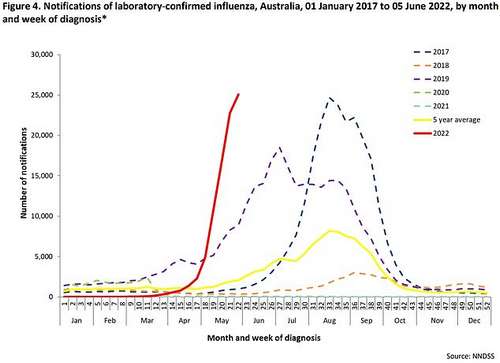 This graph, from Australia’s National Notifiable Disease Surveillance System shows the number of laboratory confirmed flu cases over the past five years. This year’s outbreak (the solid red line) shows an extraordinary surge in cases far earlier than previous years and well above the five-year average

Cases of the ‘super-flu’ were reported in March but began spreading rapidly in late May with 47,860 cases recorded between May 23 and June 5

It might also be the case that Australians are particularly susceptible to flu this year because the Government went with a zero-Covid approach for most of the pandemic, locking down entire cities at the first sign of a rise in cases. 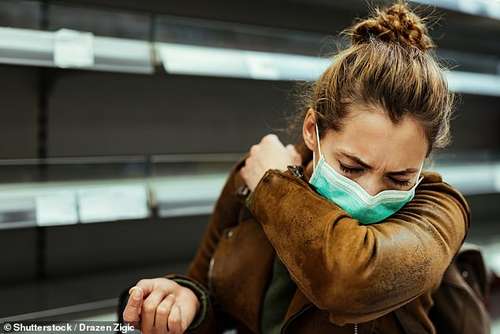 Professor Young said the UK needed to ensure both Covid and flu jabs are rolled out to as many people as possible from September onwards to prepare for a possible surge.

He added that Covid pandemic measures could also make a return.

Flu and pain medicine is flying off the shelves as Australia battles its worst recorded ‘super-flu’ outbreak after two years of the Covid pandemic made the illness almost non-existent.

Australia has recorded almost 50,000 flu cases between May 23 and June 5, breaking previous records, with cases up almost 300 times than last year in parts of the country.

Victorian President of the Pharmacy Guild of Australia Anthony Tassone said the dramatic spike in cases has led to a cold and flu medicine shortage.

‘There have been shortages for medications used for pain and fever such as: paracetamol and ibuprofen — in products for children and adults,’ he said.

‘These shortages have happened intermittently throughout the Covid pandemic and may be due to sudden increases in demand which supply cannot keep up with.’

Mr Tassone said he’d seen the shortage first-hand in his Victorian pharmacy where cases are almost 278 times higher than they were this time last year.

‘Pharmacy teams are trying their best to obtain stock as soon as possible and may be able to suggest an alternative,’ he said.

‘The Government should also issue advice on the wearing of face coverings, social distancing and on hand hygiene over the autumn/winter months,’ he said.

‘These are simple but effective measures that will help protect us all and support the NHS through what is likely to be a very challenging period.’

He added: ‘Lower overall immunity due to lockdowns, increased population mixing and the removal of other restrictions (face coverings, hand hygiene) will contribute to increased susceptibility to infection with flu.’

Nationally, Australia has reported 87,989 cases of influenza-like illnesses this year, but over half of these have been recorded in the last two weeks.

There have also been 27 deaths linked to flu recorded so far.

Pharmacists have warned that soaring demand has led to shortages of cold and flu medicines.

Flu cases generally rise in the southern hemisphere April to September and in the Northern Hemisphere in October to May.

What has some experts worried is how early and how many flu cases are being seen in Australia.

Some Australian experts have even called for anti-Covid measures like mask wearing and social distancing to be maintained to slow the spread of flu.

Stocks of medications such as paracetamol and ibuprofen have also been running low in Australia.

Scientists have warned flu seasons are going to be unpredictable due to the impact of the Covid pandemic.

For example, US Centers for Disease Control and Prevention statistics show there has been an abnormal surge in flu, starting several weeks ago, long after the Northern Hemisphere flu season is supposed to end.

Last year flu was predicted to bring the NHS to its knees due to it and Covid circulating at the same time. However, this did not come to pass.

The new outbreak in Australia began in March but started spreading rapidly in late May, with 47,860 cases recorded between May 23 and June 5.

However actual case numbers are likely to be much higher than recorded as many people do not seek medical attention for the flu.

The fast-spreading outbreak comes after weeks of warning the flu could couple with Covid and create a hybrid ‘flurona’.

A combination outbreak could see even more strain on the public health system as workers call in sick and patients flood in.

Sydney GP Kean Seng Lim called for facemasks to be brought back in late May to prevent another outbreak.

‘I think we have a big problem coming,’ he told the Today Show.

‘You have got the Covid and influenza viruses both coming on together.

‘We do see them happening more during these winter months as people cluster closer together.

‘We also have the problem where we are going to have fewer staff. It isn’t just because staff are off, because they themselves are sick, but also because their kids and grandkids are sick at schools and or schools are reducing because teachers are sick and so forth and so forth because everything interconnects.’ 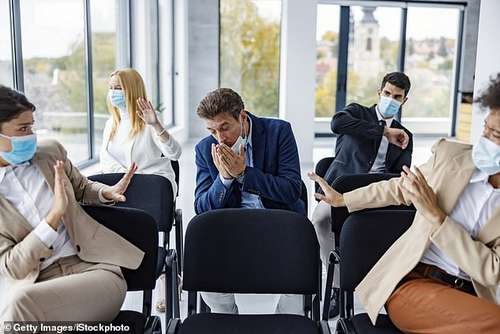