The CDC found that only 24 percent of those 18 and over were meeting weekly fitness recommendations each week. These recommendations are two-fold, including at least 2.5 hours of aerobic exercise each week — or only 75 minutes if it is of vigorous intensity — and performing muscle strengthening activity at least two days per week.

Only one-in-every-four American adults are getting enough exercise, a report by the Centers for Disease Control and Prevention (CDC) reveals.

Men (28.3 percent) were more likely than women (20.4 percent) to reach both markers. Across both genders, the 18 to 34 age group was the most active, with levels decreasing as people got older.

The sedentary lifestyle lived by many Americans has had a disastrous effect on the nation’s health. The CDC reports that more than 70 percent of Americans are overweight, and over 40 percent suffer from obesity. Just over ten percent have diabetes and heart disease remained the leading killer of people in the U.S. even through the COVID-19 pandemic.

The CDC survey found that only 24% of American adults are reaching weekly exercise recommendations, and only around half are meeting one of the two requirements

In both men and women, those aged 18 to 34 were most likely to reach exercise recommendations — with fitness rates decreasing in older age groups

The data, published by the National Center for Health Statistics on Tuesday, was collected in 2020 and is the most recent available from federal health officials.

Exercise recommendations set by federal officials have two distinct categories. First, a person is to get at least 150 minutes of aerobic exercise each week. The figure is slashed to just 75 minutes if they instead get vigorous exercise.

Adult are also expected to engage in activity that strengthens muscles across their body at least two days each week.

Through survey questions, the CDC found that 53.7 percent of Americans were reaching at least one of the two markers — with 46.3 percent not hitting either target.

Just under one-fourth, or 24.2 percent, reached both markers. Around one-fifth, or 22.7 percent, reached only the aerobic guidelines while 6.8 reached the strength recommendations without necessary aerobic activity.

Men were significantly more likely to reach both targets than women were.

Those aged 18 to 34 were most likely to exercise, with 41.3 percent of males and 28.7 percent of females reaching both target markers. 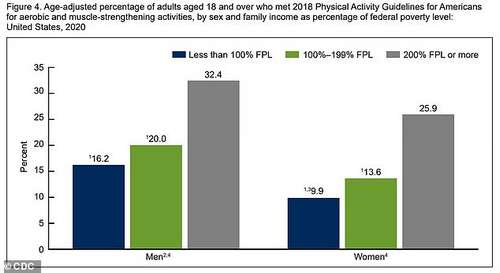 Finances played a major role in whether a person hit their weekly fitness recommendations, with richer people much more likely

White men and women were both most likely to hit exercise goals when compared to other races — though the margin between white, Asian and black men was very slim — all falling just around 30 percent.

The racial gap was much more pronounced among women. While 24.3 percent of white women hit designated markers, 18 percent or less of black, Hispanic or Asian women did.

Income played a large role as well, with those with a household income double the federal poverty line twice as likely to reach goals as those below the limit. 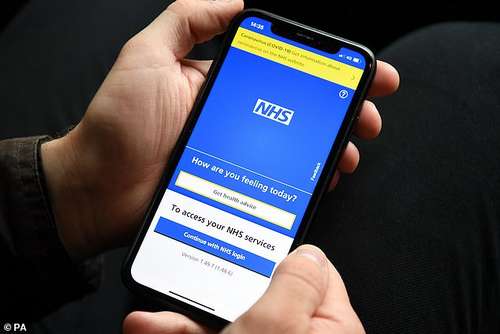 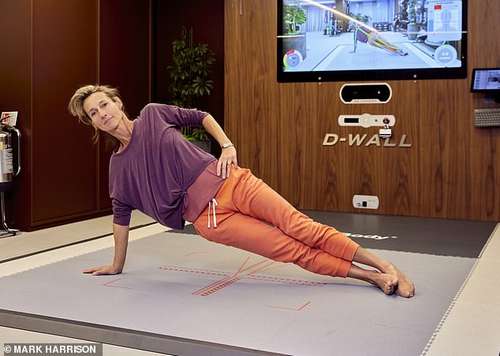