It’s finally been settled. The best way to protect yourself against dementia is to keep your brain stimulated, a major review suggests.

People who regularly read books, played musical instruments or keep a personal diary have a 23 per cent lower risk of developing the condition.

The analysis of dozens of studies involving 2million middle-aged and older people also found physical activity was the next best thing for keeping the brain sharp.

Regularly playing sports, doing yoga or dancing was found to have a 17 per cent protective effect.

And people with a vibrant social lives appear to have a 7 per cent lower risk of developing dementia than loners.

Researchers said joining a club, volunteering, spending time with friends and families or going to religious events all had a positive effect.

Lead author Professor Lin Lu, from Pecking University in Beijing, said: ‘This meta-analysis suggests that being active has benefits, and there are plenty of activities that are easy to incorporate into daily life that may be beneficial to the brain.’

Researchers at Pecking University in Beijing examined patterns in hobbies and cases of dementia among 2.1million people. The findings show that those who engage in mental tasks — such as reading, writing and even watching TV — were a quarter less likely to receive a dementia diagnosis. Meanwhile, staying active reduced the risk by a fifth and meeting up with others lowered the likelihood by a tenth 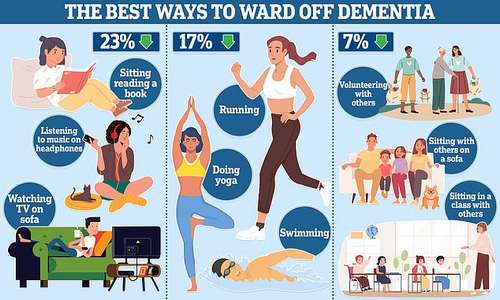 People who regularly read books, played musical instruments or keep a personal diary have a 23 per cent lower risk of developing the condition

Dementia is an umbrella term used to describe a range of progressive neurological disorders (those affecting the brain) which impact memory, thinking and behaviour.

There are many different types of dementia, of which Alzheimer’s disease is the most common.

Some people may have a combination of types of dementia.

Regardless of which type is diagnosed, each person will experience their dementia in their own unique way.

Dementia is a global concern but it is most often seen in wealthier countries, where people are likely to live into very old age.

HOW MANY PEOPLE ARE AFFECTED?

The Alzheimer’s Society reports there are more than 900,000 people living with dementia in the UK today. This is projected to rise to 1.6million by 2040.

Alzheimer’s disease is the most common type of dementia, affecting between 50 and 75 per cent of those diagnosed.

In the US, it’s estimated there are 6million Alzheimer’s sufferers. A similar percentage rise is expected in the coming years.

As a person’s age increases, so does the risk of them developing dementia.

Rates of diagnosis are improving but many people with dementia are thought to still be undiagnosed.

IS THERE A CURE?

Currently there is no cure for dementia.

But new drugs can slow down its progression and the earlier it is spotted the more effective treatments are.

Around 900,000 people are thought to be living with dementia in the UK, with rates expected to increase with an ageing population.

The figure is nearly seven times higher in the US, with 6.2million blighted by the memory-robbing condition.

There is no cure for the disease, meaning doctors can only prescribe drugs that lessen its symptoms.

Doctors recommend a balanced diet and regular exercise, with evidence showing both can protect against dementia.

The meta-analysis involved a review of 38 studies from around the world involving 2.1mllion people who did not have dementia.

They were aged 45 to 93 at the beginning of the study.

Participants were then monitored for between three and 44 years. Over the course of the study period, 74,700 people developed dementia.

Information about their hobbies were provided through questionnaires or interviews.

Leisure activities were defined as those in which people engaged for enjoyment or well-being.

They were divided into mental, physical and social activities.

But they said the findings on watching television were still inconclusive. Previous studies have indicated people are more likely to develop the disease if they watch lots of television, because their mind switches off for prolonged periods.

Exercise has been shown to keep the heart healthy and blood circulating normally.

Heart problems can increase the risk of dementia by cutting off blood flow to the brain, starving neurons of oxygen and speeding up cell death.

Attending a class, joining a social club, volunteering, visiting with relatives or friends, or attending religious activities were among the most popular social activities in the analysis.

Researchers believe spending time with others may protect the brain by increasing social contact and emotional stimulation, while reducing the risk of depression and stress — two risk factors for dementia.

Professor Lu, a neuroscientist at the Chinese university, said: ‘Previous studies have shown that leisure activities were associated with various health benefits, such as a lower cancer risk, a reduction of atrial fibrillation, and a person’s perception of their own well-being.

He said future studies should include a larger group of people and monitor participants for longer to ‘reveal more links between leisure activities and dementia’.

The team noted that the findings relied on volunteers reporting their own activities, so there may be some inaccuracies. 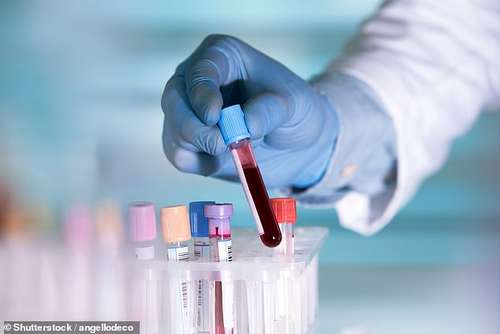 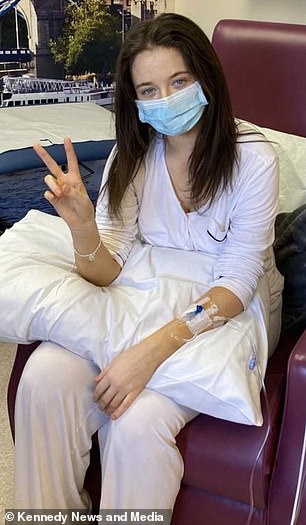