A neuroscientist has revealed the five things everyone should do to protect their brain, including meditating and working out.

Cody Isabel, 26, from Kansas City, Missouri, regularly posts videos to his TikTok channel sharing neurology tips with his over 122,000 followers.

In one video, which racked up over 1.3 million views, Cody shared the five things he would never do as a neuroscientist.

He encouraged his followers to ‘prioritize’ these five areas of their life ‘instead of ignoring them‘ and promised they would see a change in their mental health, physical health and overall lifestyle in as little as 30 days.

Cody Isabel, 26, from Kansas City, Missouri, took to TikTok to share the five things he would never do as a neuroscientist to keep his brain sharp

Never ‘mess up your sleep’

First up on his list of things he’d never do was ‘mess up’ his sleep schedule.

He then explained that sleep decreases inflammation in the brain that’s caused from ‘daily living trauma.’ 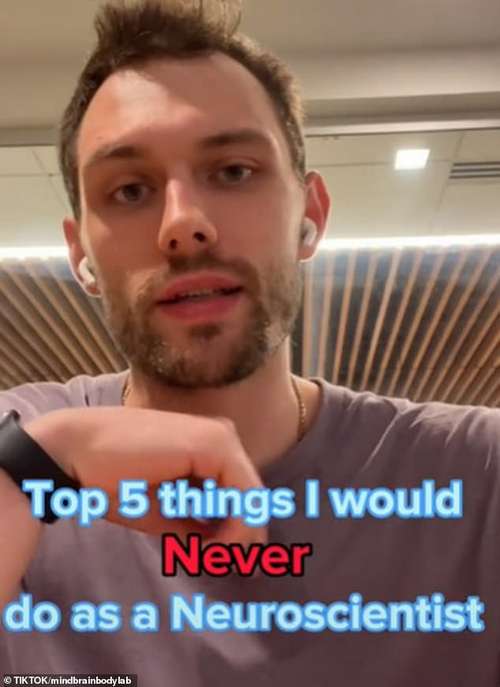 According to Brain&Life, more than 60 per cent of Americans report their sleep needs aren’t being met during a typical week.

Research suggest that continuous sleep deficits can take a considerable toll on the brain.

Many neurologists have compared lack of sleep to intoxication but without the buzz.

In addition to slowing mental abilities such as learning, speaking and reading, a lack of sleep can also cause memory problems.

In a recent study of 70 healthy adults, Johns Hopkins Bloomberg School of Public Health found that shorter reported durations of sleep and overall sleep quality are linked to a greater bet-amyloid burden, which is the protein associated with Alzheimer’s disease.

Cody encouraged his followers to meditate as he revealed he would never skip a meditation session.

‘[Meditation] is an easy way to calm your mind, decrease anxiety, decrease depression and lower inflammation in your brain.’

He added that he meditates 10 minutes a day and that it improves your overall quality of life.

A study from UCLA backed up Cody’s words as it revealed that long-term meditators had better-preserved brains than non-meditators as they aged.

Participants who’d been meditating for about 20 years had more grey matter volume, which contains most of the brain’s neuronal cell bodies, while those who didn’t meditate throughout their life had a grey matter volume that wasn’t as pronounced.

Another study from Yale found that meditation decreased activity in the default mode network or the DMN, which is the area of the brain responsible for mind-wandering and self-referential thoughts.

The DMN is active when our minds aren’t thinking about anything in particular and just jumping from thought to thought.

Furthermore, John Hopkins proved that meditation had the ability to reduce symptoms of depression, anxiety and pain.

The study noted that frequent meditation can help manage symptoms.

Cut back on alcohol

The third thing the neuroscientist admitted was that he would never binge drink alcohol.

He added: ‘Alcohol inflames your brain directly and depresses you.’

According to American Addiction Centers, both short term and long term heavy drinking can have negative affects on your brain.

Heavy, long term alcohol can result in learning and memory issues and even lead to the the development, or worsen, mental health conditions.

Alcohol also disrupts the brain’s balance and forces a person to adapt in an effort to compensate for the effects of the alcohol.

Alcohol also has immediate effects on your brain due to its influence on the brain’s communication and information processing pathways.

This means that drinking too heavily even in a short period of time can cause confusion, impaired motor coordination and declined decision-making ability.

Furthermore continuing to heavily drink both short term and long term can lead to alcohol poisoning and can further decreases your brain’s cognitive performance.

Make sure you are active every day

‘I would never get so busy that I can’t workout or not get a workout in,’ Cody said

‘I would never get so busy that I can’t workout or not get a workout in,’ the neuroscientist said.

Cody added that working out or remaining active releases BDNF, which decreases brain fog, and increases your ability to learn.

According to the Dana Foundation, during exercise your heart rate increases and so does the blood flow to your brain.

Exercising is also said to reduce your mood and overall stress by releasing chemicals such as dopamine and endorphins that make you feel happy.

It’s also been proven that people who exercise are said to be happier and less stressed and anxious than those who don’t.

Exercise will also help with decision making and help you control your emotions when you’re upset or angry.

In addition to boosting your mood, getting that gym membership will also improve your memory and help you sleep better.

One study found that cognitive decline is almost twice as prevalent in adults who are inactive compared those who are active.

According to the CDC, most adults should aim for at least 150 minutes of physical activity each week.

This can be broken up into 30 minute exercise sessions five days a week at moderate intensity levels to help improve your brain.

Be decisive to keep your brain healthy

‘Our brains are made to decide things, act [on] things and we learn through failure,’ he said at the end of his video.

He added that he learns through ‘act, access adjust.’

According to Headspace, worry is the root of an inability to make decisions.

When someone is worried about the choices they need to make or potential outcomes of those choices, they often respond with avoidance.

Although it may seem easier to allow your mind to get distracted and avoid decision making, it eventually catches up to you and will cause you to enter a state of worry and loose focus.

Decisively making decisions can help you  focus better in the long term and every time you make a decision you teach your brain to get better on focusing on one thing at a time.

The neuroscientist’s video gained millions of views and thousands of users took to his comment section to share their thoughts on his five tips.

In his video Cody promised his followers that if they prioritized these five things they could ‘heal’ their brain.

Many users thanked Cody for enlightening them and sharing his tips, while others, mainly new parents joked their ‘newborn’ wouldn’t agree with him

Many users thanked Cody for enlightening them and sharing his tips, while others, mainly new parents joked their ‘newborn’ wouldn’t agree with him.

‘This is the content I’m here for,’ said one user.

‘Act. Assess. Adjust. This is so helpful. I’m a paralysis of analysis person. Fail forward. I love it,’ commented one user.

Another user wrote: ‘Lets go over this list again when you have kids.’

‘Sending this to my newborn,’ added another user. 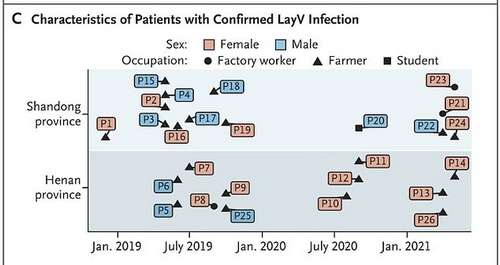 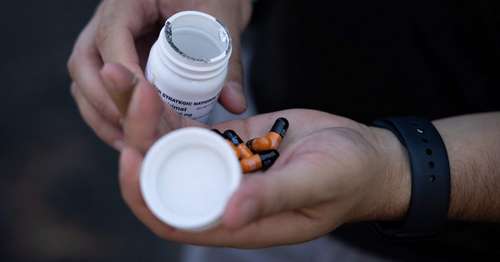 There’s Just One Drug to Treat Monkeypox. Good Luck Getting It