In a Facebook post, Reams said the sheriff’s office has seen an increase in calls for service during the COVID-19 pandemic. Due to the large call volume, Reams said calls about the mask order are not considered a priority call.

“Egregious violations may be referred to the health department for further investigation,” Reams said in the post. “As always, we all need to be invested in our own safety whether that means carrying a concealed weapon or wearing a mask; be smart and be responsible.”

The El Paso County Sheriff’s Office also announced deputies will not issue citations for mask violations. The sheriff’s office said their official position is to “educate the public about the benefits of wearing face coverings in enclosed public spaces.”

Weld County Sheriff Steve Reams said his deputies will not cite people for violating Colorado’s new mask mandate. Gov. Jared Polis announced the statewide order on Thursday, which requires most people over the age of 11 to wear a mask in public indoor spaces.

People who have medical conditions or disabilities that prevent them from wearing face masks are exempt from the order. Sheriff Reams said his office was overwhelmed with questions following the governor’s announcement.

Colorado Rep. Patrick Neville, a Republican who represents Douglas County, said he plans to sue to the governor over the mask mandate.

The Governor is on a power trip and IMO his mask mandate is a clear violation of our civil liberties. I’ve retained counsel with the intent to sue. Stay tuned…#copolitics

Rep. Neville said he has hired an attorney and believes the mask mandate violates civil liberties.

The Douglas County Commissioners, who voted to opt-out of the Tri-County Health Department’s mask mandate, issued the following statement about the statewide mask order.

“While consultation with local governments would have been preferred, now that we’ve heard from our state’s top elected official ordering a statewide mask mandate, we urge our citizens and business communities to comply with the public safety Executive Order. We will continue to encourage personal responsibility as we monitor Douglas County’s data over the next 30 days for a reduction in the spread of COVID-19-related hospitalizations, which as of today are 13.”

“We are already in the process of stepping up our visibility in our enforcement throughout the city. They will also be proactively visiting businesses and other various venues where coverings are mandated, we will we will be taking enforcement actions where non compliance is prevalent,” the mayor said.

Officials said the Denver Department of Public Health and Environment receives anywhere between 150 and 200 complaints a week about people violating public health orders, and they respond to every one.

In recent weeks, Polis had taken to social media to get his mask point across, and earlier this week said he was hoping he wouldn’t have to take this action. The order overrides all the decisions by local governments to opt out of their county’s health department orders. More than half of all states in the country already have some type of mask-wearing mandate. 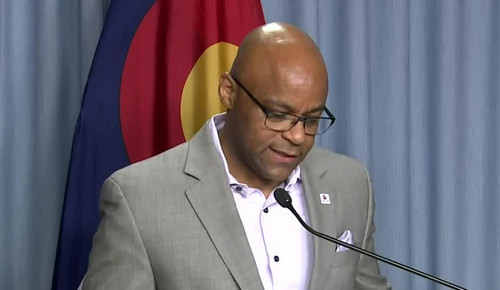 How to overcome your ‘gymtimidation’

How long do I need to quarantine for after a positive Covid test?