Covid lockdowns have created a ‘global crisis for mental health’, the World Health Organization has admitted. An international report by the UN agency found two years of restrictions have led to ‘significant mental health consequences’, especially for young people.

The WHO now estimates more than a billion people around the world are living with a mental health disorder as a result, a quarter more than pre-Covid.

It said there had been an even bigger rise among children, ‘potentially reflecting the deep impact of school closures’.

Curbs imposed to control Covid led to feelings of ‘social isolation, disconnectedness and uncertainty about the future’, the report added.

The admission comes despite the WHO hailing China’s lockdowns at the start of the pandemic and warning that lifting measures too early in Britain may cause a ‘deadly resurgence’ in 2020.

Schools were closed nationally at least twice over the course of the pandemic, with students also forced to learn from home because of individual closures.

More than 100 countries also shut down schools during the peak of the first wave.

Covid lockdowns have caused ‘significant mental health consequences’ in children because of school closures and social restrictions, the World Health Organization has admitted

The authors of a new book claim a ‘chilling’ warning about the devastating impact school closures would have on pupils during the pandemic was ignored by Government scientists behind Britain’s lockdown.

Campaigners Liz Cole and Molly Kingsley unearthed a report written in April 2020, just a month after schools closed, which said the move was putting education seriously at risk and two-thirds of parents were already warning their children’s mental health was suffering.

The report, written by four academics and a civil servant on the Government’s Scientific Advisory Group for Emergencies (Sage), said the risk to 30,000 vulnerable children had ‘increased significantly’ and called for data to be urgently collected on whether child suicides were rising. 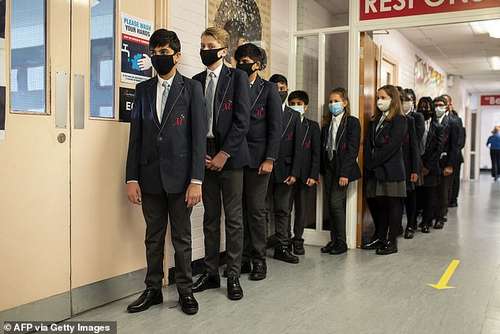 The authors found the study had been quietly released as an ‘annexe’ to another report and did not appear to have been discussed by other scientists on Sage.

They say it was one of a string of ‘ear-splitting’ warnings that went unheeded about the harm that school closures and strict social distancing rules would cause children.

The Children’s Inquiry, which will be published this month, claims children were treated as a ‘de facto underclass’ during the pandemic and that an entire cohort of pupils are now unhealthier, unhappier and behind educationally.

The book says: ‘It should be a matter of shame to all involved that by summer 2020, most UK children were unable to attend school while adults queued outside Primark or went to the pub.’

The WHO World Mental Health Report was published on June 16 by the WHO’s mental health and substance division.

It was designed to improve mental health across the world, looking at all the latest data available with case studies from people living with conditions.

It said more than one billion people are now living with a mental health condition, after increasing by more than 25 per cent dung the first year of the pandemic.

The most common types include anxiety, depression and developmental disorders like autism.

But children were worst affected by restrictions, officials said, with rates of bullying and abuse at home increasing and a lack of social interaction causing isolation during school closures.

The report said: ‘Restrictions imposed during the Covid pandemic for example had significant mental health consequences for many, including stress, anxiety or depression stemming from social isolation, disconnectedness and uncertainty about the future.’

It added: ‘Globally there was also a greater change in prevalence among younger age groups than older ones, potentially reflecting the deep impact of school closures and social restrictions on youth mental health.

‘For some children and adolescents, being made to stay at home is likely to have increased the risk of family stress or abuse, which are known risk factors for mental health problems.’

The WHO’s mental health and substance division is responsible for helping prevent mental, neurological and substance use disorders and was not in charge of the WHO’s Covid response.

It was signed off by Dr Tedros Adhanom Ghebreyesus, director general of the WHO, who faced heavy criticism for his handling of the pandemic, which was deemed to be very ‘China-centric’, heaping praise on China’s communist party for its response to the Covid outbreak.

After meeting Chinese president Xi Jinping in January 20202, he said: ‘I was very encouraged and impressed by the president’s detailed knowledge of the outbreak and his personal involvement in the outbreak.

‘This was for me a very rare leadership.’

But he has since been censored by Chinese state media for criticising the country’s current zero Covid policy in May this year.

The report found bullying and sex abuse were the largest contributors to increased depression in children across the world.

Before the pandemic, the WHO estimated as many as one in seven (14 per cent) of children had a mental health disorder.

The report did not estimate the current rate but said the 25 per cent increase in disorders across the world was even higher in children.

It said: ‘Extended school and university closures interrupted routines and social connections, meaning that young people missed out on learning and experiences expected for healthy development.

‘Disruption and isolation can fuel feelings of anxiety, uncertainty and loneliness, and can lead to affective and behavioural problems.’

Boris Johnson closed England’s 24,000 schools for the first time in March 2020, with some children returning briefly from June that year.

Classes were then shut again in January 2021 at the start of the Alpha wave before reopening on March 1. Overall, schools in England were shut for longer than in any other European country.

Several studies since then have shown young people’s mental health deteriorated while learning at home.

A study led by University College London researchers showed nearly five times as many children died of suicide compared to the virus during the first year of lockdowns.

More than one million referrals were made to specialist child mental health services last year — up 15 per cent.

Research in Japan last November suggested school shutdowns during 2020 did not prevents the spread of the virus.

As well as the toll on people’s mental health, economies around the world are now struggling under the highest inflation seen in decades due to the economic fallout of closing down society.

But top experts insist lockdowns — especially during the first wave, before vaccines were on the scene — were crucial and saved thousands of lives.

It comes after a new book claimed ministers ignored warnings that continued school closures would cause an upswing in mental health problems for children.

The book, written by the founders of the UsForThem campaign, revealed Anne Longfield, then Children’s Commissioner, spent ‘weeks and weeks’ arguing that children should return to school.

In May 2020 she demanded that ministers and unions ‘stop squabbling and agree a plan’.

Ms Longfield told the authors it was ‘absolutely unnecessary’ to keep schools closed until the last weeks of the summer term in 2020.

She said: ‘It added a huge additional detriment to those children and was completely irresponsible and virtually criminal for those children.’