The Food and Drug Administration is planning to require tobacco companies to slash the amount of nicotine in traditional cigarettes to make them less addictive, a move intended to reduce smoking, according to a notice posted Tuesday on a U.S. government website.

According to the notice, “this proposed rule is a tobacco product standard that would establish a maximum nicotine level in cigarettes and certain finished tobacco products. Because tobacco-related harms primarily result from addiction to products that repeatedly expose users to toxins, F.D.A. would take this action to reduce addictiveness to certain tobacco products, thus giving addicted users a greater ability to quit.”

The proposal would put the United States at the forefront of global antismoking efforts by taking an aggressive stance at significantly lowering nicotine levels. Only one other nation, New Zealand, has advanced such a plan. The headwinds, though, are fierce, with a powerful tobacco lobby already indicating any plan with significant reductions in nicotine would be untenable and with conservative lawmakers who would consider government overreach that could spill over into the midterm elections.

Asked about news reports on a new policy on Tuesday, the White House press secretary, Karine Jean-Pierre, reminded reporters that agencies routinely post agenda plans on the website for the Office of Management and Budget. And in this case, she said no policy decision had been made.

Few specifics were released on Tuesday, but an announcement has been expected. Last week, Dr. Robert Califf, commissioner of the F.D.A., told an audience he would be speaking more about reducing nicotine addiction soon.

Similar plans have been discussed to lessen Americans’ addiction to products that coat the lungs with tar, release 7,000 chemicals and lead to cancer, heart disease and lung disease. Nicotine is also available in e-cigarettes, chews, patches and lozenges, but this proposal apparently would not affect those products. 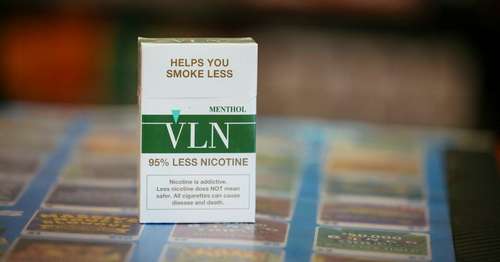 “This one rule could have the greatest impact on public health in the history of public health,” said Mitch Zeller, the recently retired F.D.A. tobacco center director. “That’s the scope and the magnitude we’re talking about here, because tobacco use remains the leading cause of preventable disease and death.”

About 1,300 people die prematurely each day of smoking-related causes, according to the Centers for Disease Control and Prevention, adding up to about 480,000 deaths per year.

The obstacles to such a plan, though, are immense and could take years to overcome. Some plans have been floated that would require a 95 percent reduction in the amount of nicotine in cigarettes. That could toss U.S. smokers, an estimated 30 million people, into a state of nicotine withdrawal, which involves agitation, difficulty focusing and irritability. It would send others in search of alternatives such as e-cigarettes, which are not included in the proposal.

Experts said that determined smokers might seek to buy high-nicotine cigarettes on illegal markets or across the borders in Mexico and Canada.

Read More on Smoking and Vaping

The F.D.A. would likely have to overcome opposition from the tobacco industry, which has already begun pointing out the reasons the agency cannot upend an $80 billion market. Legal challenges could take years to resolve, and the agency may give the industry five or more years to make the changes.

Other major tobacco initiatives outlined in the landmark 2009 Tobacco Control Act have been slow to take shape. A lawsuit delayed a requirement for tobacco companies to put graphic warnings on cigarette packs. And the agency recently said it would take up to another year to finalize key decisions on which e-cigarettes might remain on the market.

Cigarette makers have already warned that the F.D.A. would be overstepping its authority to regulate cigarettes by requiring a product that’s impossible to produce or unacceptable to consumers.

“Both an express and a de facto ban would have precisely the same effect — both would eviscerate Congress’s expressly stated purpose ‘to permit the sale of tobacco products to adults,’” according to a letter in 2018 from RJ Reynolds’s parent company, RAI Services, to the F.D.A. about an earlier proposal.

The effort to lower nicotine levels follows a proposed rule announced in April that would ban menthol-flavored cigarettes, which are heavily favored by Black smokers. That proposal was also hailed as a potential landmark advance for public health, and it has already drawn tens of thousands of public comments. The F.D.A. is bound to review and address those comments before finalizing the rule.

Five years ago, Dr. Scott Gottlieb, the agency’s commissioner at the time, released a plan to cut nicotine levels in cigarettes to a minimally or non-addictive level. The proposal took shape in 2017, but did not lead to a formal rule during the Trump administration.

At the time, the F.D.A. said a model predicted that sharply reducing nicotine in cigarettes would spur five million people to quit smoking in one year.

Among the 8,000 comments that poured in on a 2018 proposal, opposition emerged from retailers, wholesalers and tobacco companies. The Florida Association of Wholesale Distribution, a trade group, said the proposal could result in “new demand for black-market products, and result in increased trafficking, crime and other illegal activity.”

RAI Services, the parent company of RJ Reynolds that is one of the biggest tobacco businesses, said in 2018 that the F.D.A. had no evidence that the plan to cut nicotine levels would improve public health. The agency “would need to give tobacco manufacturers decades to comply,” and figure out how to consistently grow low-nicotine tobacco, RAI said in a letter to the F.D.A. What’s more, the letter stated, the agency had no authority “to force tobacco farmers to change their growing practices.”

The tobacco company Altria also warned in 2018 that a standard that degrades tobacco “to the point of being unacceptable to adult smokers” would be considered a cigarette ban that would violate tobacco control laws.

The Tobacco Control Act of 2009 gave the F.D.A. broad powers to regulate tobacco products with standards “appropriate for the protection of the public health,” although it specifically outlawed a ban on cigarettes or the reduction of nicotine levels to zero.

Low-nicotine cigarettes are already available to consumers, albeit in a limited fashion. This spring, a New York plant biotech company, 22nd Century Group, began selling a reduced-nicotine cigarette that took 15 years and tens of millions of dollars to develop through the genetic manipulation of the tobacco plant. The company’s brand, VLN, contains five percent of the nicotine level of conventional cigarettes, according to James Mish, the company’s chief executive.

“This is not some far-off technology,” he said.

To earn its F.D.A. designation as a “reduced-risk” tobacco product, VLN was subjected to a raft of testing and clinical trials by regulators.

For now, the company is selling VLN at Circle K convenience stores in Chicago as part of a pilot program. Mr. Mish described sales as “modest” — retail prices are similar to premium brands like Marlboro Gold — but he said the proposed F.D.A. rule would most likely accelerate plans for a national rollout in the coming months. That said, the company’s long-range business plan, he said, was largely predicated on licensing its genomic engineering technology to Big Tobacco.

Dr. Neal Benowitz, a professor of medicine at the University of California, San Francisco, who studies tobacco use and cessation, first proposed the idea of paring the nicotine out of cigarettes in 1994.

He said one key concern was whether smokers would puff harder, hold in smoke for a longer time or smoke more cigarettes to compensate for the lower nicotine level. After several studies, researchers discovered that the cigarette that prevented those behaviors was the lowest-nicotine version, one with about 95 percent less of the addictive chemical.

Dorothy K. Hatsukami, a professor of psychiatry at the University of Minnesota who studies the relationship between nicotine and smoking behavior, said a growing body of evidence suggested that a rapid and significant reduction of nicotine in cigarettes would provide greater public health benefits than the gradualist approach that some scientists had been promoting.

A 2018 study led by Dr. Hatsukami that followed the habits of 1,250 smokers found that participants who had been randomly assigned cigarettes with ultra-low nicotine smoked less and exhibited fewer signs of dependency than those who had been given cigarettes with nicotine levels that were gradually reduced over the course of 20 weeks.

There were, however, downsides to slashing nicotine in one fell swoop: Participants dropped out of the study more frequently than those in the gradualist group and they experienced more intense nicotine withdrawal. Some secretly turned to their regular, full-nicotine brands.

“The bottom line is we’ve known for decades that nicotine is what makes cigarettes so addictive, so if you reduce the nicotine, you make the experience of smoking less satisfying and you increase the likelihood that people will try to quit,” she said.

A recent study offers a cautionary tale, though, on the degree of public health benefit lawmakers can expect from tobacco-control policy. While there is no other nation to look to for experience with a low-nicotine cigarette mandate, there is for the menthol flavor ban.

Alex Liber, an assistant professor in the oncology department of Georgetown University’s School of Medicine who studies tobacco control policy, examined Poland’s experience with a menthol cigarette ban instituted in 2020.

The study he and others wrote found the ban did not lead to a decrease in overall cigarette sales, Mr. Liber said, probably because tobacco companies cut cigarette prices and also began selling flavor-infusion cards (for about a quarter each) that users can put in their cigarette pack to add back the flavor.

“They know how to sell and make money and they will make more and more as long as they have wiggle room,” he said. “I just expect nothing less.”