Up to one in 10 people in North America may have had Lyme disease, according to new estimates. For decades, researchers have been clueless as to exactly how widespread the tick-borne illness really is.

But now scientists from Kunming Medical University in southern China have estimated as many as 50 million people on the continent — or 9.4 percent — have been infected at some point in their lives.

Globally up to 14.5 percent of people have had the disease — or one in seven — the researchers claimed.

Rates were highest in Central Europe — where one in five were estimated to have been infected —  Eastern Asia, about one in seven, and Eastern Europe, about one in 10. North America had the fourth highest rate.

Up to one in ten people in North America have already had Lyme disease, according to new estimates. Globally, around 14 percent of people have already been infected with the disease

Lyme disease is a bacterial infection that is spread through a tick bite. It causes a round rash and can trigger flu-like symptoms but usually gets better with antibiotics within weeks or months. Pictured: stock of tick

WHAT IS LYME DISEASE?

Lyme disease is a bacterial infection that is spread to humans by infected ticks.

It causes symptoms including a circle or oval-shaped rash around a tick bite, which usually appears within four weeks of being bitten, but may take up to three months to show.

Some people also get flu-like symptoms in the days after being bitten, including a high temperature, a headache, muscle and joint pain and a loss of energy.

And a few of those treated for Lyme disease continue to have symptoms, such as tiredness, aches and a loss of energy, that can last for years.

It’s not clear why some suffer from ongoing symptoms and there is no agreed treatment for the disease.

Not all ticks carry the bacteria that causes Lyme disease, but infected ticks can be found across the UK.

High risk areas include grassy and wooded areas in northern and southern England, as well as the Scottish Highlands.

People are advised to remove ticks safely and as soon as possible using tweezers.

For the meta-analysis, scientists examined blood sample data from studies involving 150,000 people conducted between 1984 and 2021.

Each paper looked at Lyme disease rates from the results of tests that scanned the blood for antibodies against the disease. 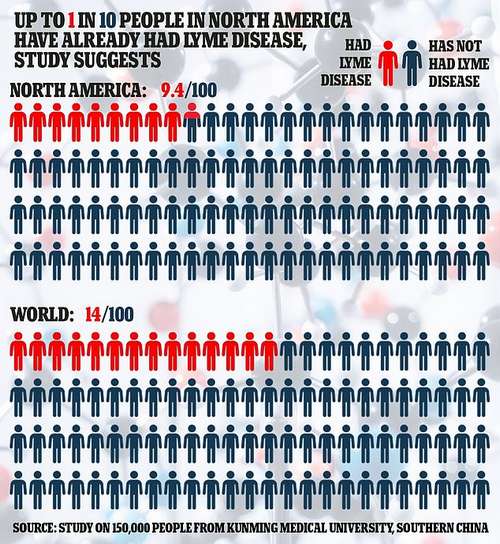 This allowed scientists to confirm whether a person was currently infected or had been in the past.

The team said their findings — published in BMJ Global Health — were the ‘most comprehensive and up-to-date systematic review of the worldwide’ prevalence of Lyme disease.

They said a ‘more accurate’ figure on the global distribution of this disease would help to ‘identify risk factors’.

This could then, they added, ‘inform the development of public health response policies and control programs’.

Before now, the most accurate figures suggested that around 30,000 people in the U.S. were struck down every year. However, these were widely thought to be an underestimate.

There are no figures on how many people die from the disease every year, although it is known to rarely be fatal.

Ticks are second only to mosquitos in terms of the number of harmful microbes they carry.

Some harbor Borrelia burgdorferi sensu lato, the bacteria which is responsible for Lyme disease.

The infection triggers a circular oval-shaped rash — or ‘bulls-eye’ — around a tick bite that can appear up to three months after being bitten.

Most infections can be treated with a course of antibiotics.

But if sufferers wait too long to seek care the bacteria can spread to other organs and tissues, potentially affecting the nervous system, joints, heart and skin.

Signs of a long-term illness include severe headaches, facial paralysis and an irregular heartbeat.

Lyme disease is diagnosed using a simple antibody test. But in the early stages of infection up to 60 percent of cases are missed because there are too few antibodies for the test to pick up.

This could be down to longer summers and warmer winters, animal migration and increased time spent outdoors.

A sub-analysis showed over-50s, men and those living in rural areas were most likely to have Lyme disease.

Men were more likely to be working in jobs that make them more exposed to ticks, such as farmers, police officers and soldiers.

The team said it is ‘essential’ to develop new treatments and prevention methods.

However, they noted that a third of the studies used just one type of test to confirm a Lyme disease infection.

These studies reported more cases than those using a second test to confirm a case.

This may be due to the bacteria behind Lyme being similar to other viruses, such as Epstein-Barr.

And they said that some of the studies were conducted in regions where Lyme disease is endemic and therefore had much higher rates.

The Battle Over Gender Therapy