The NHS will ask patients to turn their bedrooms into hospital wards in an effort to free up hospital beds and tackle waiting lists. They will be given mobile phones and wearable devices that allow doctors to monitor their vital signs remotely on ‘virtual wards’.

Up to 25,000 people at a time could be treated under the ‘hospital at home’ scheme by March 2024 in a big boost to capacity.

And it could allow patients to be discharged from hospital sooner – or avoid the need to be admitted in the first place.

The initiative forms part of the Government’s Plan for Digital Health and Social Care, published today.

It outlines ministers’ ambitions to expand the use of technology within the NHS rapidly in an attempt to save billions of pounds over the next decade.

Proposals include expanding the use of remote monitoring, improving the NHS App and rolling out digital health and social care records in hospitals and care homes.

The Government will create an extra 10,500 data and technology roles as well as increase training in these areas for new and existing staff. 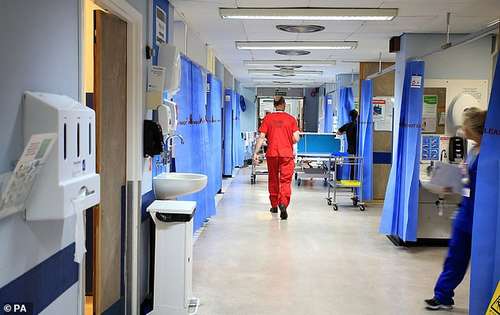 The expanded use of ‘virtual wards’ comes after NHS England chief executive Amanda Pritchard admitted that too many beds had been cut. Some 25,000 staffed beds have been lost since 2010/11, with fewer beds per head of population than comparable countries.

Mrs Pritchard told the NHS ConfedExpo conference this month: ‘We have passed the point at which that efficiency actually becomes inefficient.’ A shortage of beds, along with delays in discharging medically fit patients into social care, have contributed to longer waits for routine operations and in A&E.

There are a record 6.5 million people on NHS waiting lists, with numbers soaring in recent months due to disruption caused by the pandemic.

More than 280,000 people have had their conditions, such as asthma, remotely monitored at home and in care homes over the past year, freeing up hospital beds and clinicians’ time.

This has resulted in improvements in patient outcomes, with problems spotted earlier, shorter stays in hospital and fewer admissions, according to the Department of Health and Social Care. A further 500,000 people could be supported in this way by March next year, the plan adds.

Patients will also be able to complete their hospital pre-assessment checks from home by September 2024.

Up to 25,000 people at a time could be treated under the ‘hospital at home’ scheme by March 2024 in a big boost to capacity (stock of ambulance) 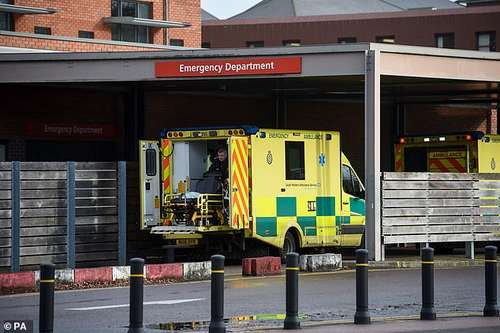 Upcoming versions of the NHS App will let patients book and rearrange hospital appointments and communicate with their GP surgeries.

It will also give greater access to medical records and be used for remote consultations. More than 28 million people have already downloaded it.

Health and Social Care Secretary Sajid Javid said: ‘We are embarking on a radical programme of modernisation that will make sure the NHS is set up to meet the challenges of 2048 – not 1948, when it was first established.

‘This plan builds on our data strategy to revolutionise digital health and care, which will enable patients to manage hospital appointments from the NHS App and take more control of their own care at home, picking up problems sooner and seeking help earlier.

‘Ensuring more personalisation and better joining up of the system will benefit patients, free up clinician time, and help us to bust the Covid backlogs.’

Dr Timothy Ferris, director of transformation at NHS England, said: ‘By harnessing the power of digital and data we can improve both how people access services and the way we provide care.

‘Today’s plan for digital health and care sets out an ambitious vision for a future where the NHS puts more power and information at patients’ fingertips, and staff have the tools they need to deliver better and more joined-up services.’

The Omicron subvariants BA.4 and BA.5 have together become dominant in the U.S.