Remote hospital and GP appointments are ‘broadly’ a good thing because they reduce pollution, the NHS’ eco chief has claimed.

Thousands of operations were cancelled in 2021 and millions of people delayed coming forward due to fears about Covid.  Most GP appointments were moved online or done by telephone.

In comments that risk fuelling a row over face-to-face appointments, Dr Watts said remote care was ‘an intervention that should save carbon’ going forward.

The comments were made at an annual NHS conference in Liverpool last week, during a talk chaired by Guardian columnist Polly Toynbee.

But Dr Watts, NHS England’s chief sustainability manager, admitted hospitals had to do a ‘better job’ at ensuring everyone who wants an in-person consultation can get one. 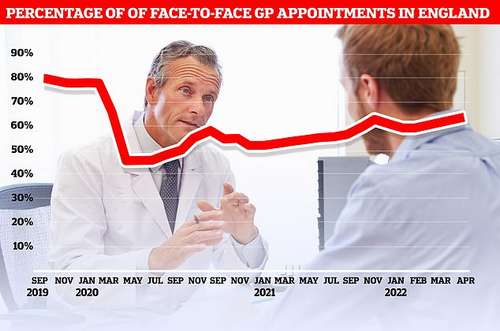 Record waits in A&E have been partly blamed on desperate patients turning up at casualty units because they can’t get an appointment with their family doctor.

Since coming into the job a year ago, Mr Javid has went to war with GPs over the issue, threatening to ‘name and shame’ those who do too many consults on Zoom.

Campaigners have argued remote consultations increase the risk of doctors missing signs of serious illnesses. They also say this is particularly true for some vulnerable patients, like those with dementia, who may struggle to communicate remotely.

The row about face-to-face appointments was brought up during a panel on the NHS’s goal to be carbon neutral by 2045.

‘Yet the Health Secretary seems to be saying, “I want everybody to be back visiting their GP in person”.

‘Surely we should be promoting the idea of the fantastic gains there have been for people not having to travel pointlessly.’ 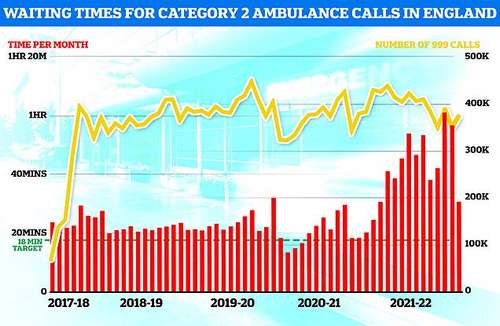 Dr Watts replied: ‘So what do we know about remote care? We know that last year alone the NHS saved, from the provision of remote care, primary and secondary, 276kilotonnes of carbon out of the atmosphere.

‘Principally, you’re right, principally it was from avoided transport emissions, so yes broadly we think that is an intervention that should save carbon.’

Some have partly-blamed poor access to GPs for the crisis in emergency departments, warning that desperate patients are showing up at A&E because they can’t see a family doctor. In May, 19,053 people were forced to wait 12 hours or more to be treated in A&E, three times longer than the NHS target

Ambulances took an average of 39 minutes and 58 seconds to respond to category two calls, such as burns, epilepsy and strokes. This is 11 minutes and 24 seconds quicker than one month earlier but more than double the 18-minute target

NHS ambulance drivers may have been sacked for being ‘too tall or too small’ for eco-friendlier vans, union bosses have claimed.

South East Coast Ambulance Service, which covers 4.5million patients in Surrey, Sussex and Kent, wanted its entire fleet to be made up of converted Fiat vans.

An NHS-commissioned review claimed the conversions are cheaper and better for the environment than the traditional dual-crewed ‘box’ vehicles.

The service’s own risk assessment ruled the conversions, due to how the seats and seatbelts are fitted, were unsafe for 10 per cent of its current staff because of their height. No actual heights were specified.

Trade union GMB claimed the ‘bizarre’ move, now officially on hold following huge backlash, could have effectively seen ‘experienced staff forced out of the service’ or redeployed at a time when the service is in crisis mode.

Callout and handover times have reached record highs, with some elderly Britons left in agony waiting up to 14 hours for paramedics to arrive.

Even heart attack patients faced delays of over an hour during the busiest parts of winter, with problems blamed on staffing shortages and unprecedented demand.

‘The investment in the training and development of 10 per cent of staff could have been thrown away due to their body shape.

‘There has never been a minimum or maximum height requirement to work in the ambulance service. Skills and professionalism have always been the criteria to work in this service.

‘Furthermore, SECAMB did not consider how their proposals would have affected future recruitment policy nor the impact that such a change would have on their stated policy on promoting inclusivity and diversity in the workforce.

‘The proposal also had the distinct possibility that long term experienced staff could have been forced out of the service for the bizarre reason that they are either too small or too tall.’

It is estimated that 13million fewer people went to hospital or their GP for conditions other than Covid during the pandemic. They are now flooding back to the NHS.

Campaign groups, MPs and senior medics say many are turning to emergency and walk-in services because they can’t see their GP, especially in-person.

At the current rate, it would take until September 2023 to return to levels before Covid hit.

Dr Watts added: ‘We also know that we need to do a better job of ensuring that we’re providing access to every patient that requires that [face-to-face appointments].

‘We know that some patients do want that, so it’s probably about a question of choice.

‘If you provide our patients with choice about how they can receive care very quickly I think you’ll find that people start to take it up in ways that suit them.

‘Then you’re improving care, improving access, and tackling those 276 kilotonnes of carbon.’

The head of the Royal College of Paediatrics and Child Health suggested online appointments could benefit many poor families who can’t afford to travel.

Dr Camilla Kingdon said a wider move to online could be crucial as the cost of living crisis bites.

‘The same groups of society that are most at risk from climate change and I’m talking about children are same groups suffering currently from the cost of living crisis,’ she told the conference.

‘For instance, when we talk about remote consultation, we know it costs on average £31 for a family to bring their child to an outpatient facility.

She added: ‘So online consultations is one area we can think about but it is not every child’s solution.’

Dr Kingdon said there was no ‘one-size fits all’.

‘But I think we can maximize the opportunity we’ve got, the anxiety around fuel poverty and food poverty, to really weave in the sustainability agenda at the same time,’ she added.

An NHS England spokesperson told MailOnline: ‘Allowing those who want it to get routine NHS care or advice without leaving home, or taking time off work, to travel to a hospital or a surgery is clearly a better option for them, and for our environment.

‘But face to face appointments will always be there for those who prefer them, or whose symptoms or condition means they are the right approach clinically.’

The NHS became the first health service in the world to pledge to be net zero last November.

Healthcare services are thought to contribute to about 5 per cent of the UK’s carbon footprint. Operating theatres make up a quarter of all hospital emissions.

It comes after MailOnline revealed patients are being prescribed smartphones so that more patients can be treated ‘virtually’.

NHS England has set the target of creating an additional 25,000 ‘beds’ by 2024 by expanding the use of ‘virtual wards’ to treat more people at home.

The wards are designed for patients who need care but do not necessarily need to be in hospital.

NHS chiefs said patients on some pilot schemes were already being loaned mobile phones and given lessons to help them become tech-savvy.

Dr Sarah Sibley, who runs virtual wards in Merseyside, claimed one ‘barrier’ was that many vulnerable people — particularly the elderly — do not have access to the right technology.

She added: ‘And we work in areas with lots of social deprivation, people don’t have access to technological devices or data to be able to upload information.’

Tara Donnelly, director of digital care models at NHS England, said other trusts have struck deals with companies like Vodafone to lend patients phones and tablets.