As the Covid death rate worldwide has fallen to its lowest level since the early weeks of the pandemic in 2020, it may be tempting to conclude that the coronavirus is becoming irreversibly milder. That notion fits with a widespread belief that all viruses start off nasty and inevitably evolve to become gentler over time.

“There’s been this dominant narrative that natural forces are going to solve this pandemic for us,” said Aris Katzourakis, an evolutionary biologist at the University of Oxford.

But there is no such natural law. A virus’s evolution often takes unexpected twists and turns. For many virologists, the best example of this unpredictability is a pathogen that has been ravaging rabbits in Australia for the past 72 years: the myxoma virus.

Myxoma has killed hundreds of millions of rabbits, making it the most deadly vertebrate virus known to science, said Andrew Read, an evolutionary biologist at Pennsylvania State University. “It’s absolutely the biggest carnage of any vertebrate disease,” he said.

After its introduction in 1950, myxoma virus became less lethal to the rabbits, but Dr. Read and his colleagues discovered that it reversed course in the 1990s. And the researchers’ latest study, released this month, found that the virus appeared to be evolving to spread even more quickly from rabbit to rabbit.

Scientists intentionally introduced the myxoma virus to Australia in the hopes of wiping out the country’s invasive rabbit population. In 1859, a farmer named Thomas Austin imported two dozen rabbits from England so he could hunt them on his farm in Victoria. Without natural predators or pathogens to hold them back, they multiplied by the millions, eating enough vegetation to threaten native wildlife and sheep ranches across the continent.

In the early 1900s, researchers in Brazil offered Australia a solution. They had discovered the myxoma virus in a species of cottontail rabbit native to South America. The virus, spread by mosquitoes and fleas, caused little harm to the animals. But when the scientists infected European rabbits in their laboratory, the myxoma virus proved astonishingly lethal. 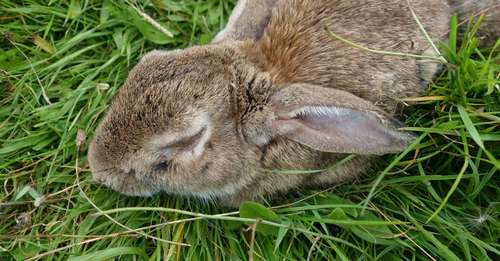 The rabbits developed skin nodules packed with viruses. Then the infection spread to other organs, usually killing the animals in a matter of days. This gruesome disease came to be known as myxomatosis.

The Brazilian scientists shipped samples of the myxoma virus to Australia, where scientists spent years testing it in labs to make sure it posed a threat only to rabbits and not other species. A few scientists even injected myxoma viruses into themselves.

After the virus proved safe, researchers sprayed it into a few warrens to see what would happen. The rabbits swiftly died, but not before mosquitoes bit them and spread the virus to others. Soon, rabbits hundreds of miles away were dying as well.

Shortly after myxoma’s introduction, the Australian virologist Dr. Frank Fenner started a careful, long-term study of its carnage. In the first six months alone, he estimated, the virus killed 100 million rabbits. Dr. Fenner determined in laboratory experiments that the myxoma virus killed 99.8 percent of the rabbits it infected, typically in less than two weeks.

Yet the myxoma virus did not eradicate the Australian rabbits. Through the 1950s, Dr. Fenner discovered why: The myxoma virus grew less deadly. In his experiments, the most common strains of the virus killed as few as 60 percent of the rabbits. And the rabbits the strains did kill took longer to succumb.

This evolution fit with popular ideas at the time. Many biologists believed that viruses and other parasites inevitably evolved to become milder — what came to be known as the law of declining virulence.

“Longstanding parasites, by the process of evolution, have much less of a harmful effect on the host than have recently acquired ones,” the zoologist Gordon Ball wrote in 1943.

According to the theory, newly acquired parasites were deadly because they had not yet adapted to their hosts. Keeping a host alive longer, the thinking went, gave parasites more time to multiply and spread to new hosts.

The law of declining virulence seemed to explain why myxoma viruses became less lethal in Australia — and why they were harmless back in Brazil. The viruses had been evolving in South American cottontail rabbits much longer, to the point that they caused no disease at all.

But evolutionary biologists have come to question the logic of the law in recent decades. Growing milder may be the best strategy for some pathogens, but it is not the only one. “There are forces that can push virulence in the other direction,” Dr. Katzourakis said.

Dr. Read decided to revisit the myxoma virus saga when he started his laboratory at Penn State in 2008. “I knew it as a textbook case,” he said. “I started thinking, ‘Well, what’s happening next?’”

No one had systematically studied the myxoma virus after Dr. Fenner stopped in the 1960s. (He had good reason to abandon it, as he had moved on to help eradicate smallpox.)

Dr. Read arranged for Dr. Fenner’s samples to be shipped to Pennsylvania, and he and his colleagues also tracked down more recent myxoma samples. The researchers sequenced the DNA of the viruses — something that Dr. Fenner could not do — and carried out infection studies on lab rabbits.

When they tested the viral lineages that had been dominant in the 1950s, they found that they were less lethal than the initial virus, confirming Dr. Fenner’s findings. And the fatality rate stayed relatively low through the 1990s.

But then, things changed.

Newer viral lineages killed more of the lab rabbits. And they often did so in a new way: by shutting down the animals’ immune systems. The rabbits’ gut bacteria, normally harmless, multiplied and caused lethal infections.

“It was truly scary when we first saw that,” Dr. Read said.

Strangely, wild rabbits in Australia have not suffered the grisly fate of Dr. Read’s laboratory animals. He and his colleagues suspect that the new adaptation in the viruses was a response to stronger defenses in the rabbits. Studies have revealed that Australian rabbits have gained new mutations in genes involved in the first line of disease defense, known as innate immunity.

As the rabbits developed stronger innate immunity, Dr. Read and his colleagues suspect, natural selection, in turn, favored viruses that could overcome this defense. This evolutionary arms race erased the advantage the wild rabbits had briefly enjoyed. But these viruses proved even worse against rabbits that had not evolved this resistance, such as those in Dr. Read’s laboratory.

And the arms race is still unfolding. Roughly a decade ago, a new lineage of myxoma viruses emerged in southeastern Australia. This branch, dubbed Lineage C, is evolving much faster than the other lineages.

Infection experiments suggest that new mutations are allowing Lineage C to do a better job of getting from host to host, according to the latest study by Dr. Read and his colleagues, which has not yet been published in a scientific journal. Many infected rabbits display a strange form of myxomatosis, developing massive swellings on their eyes and ears. It is precisely these places where mosquitoes like to drink blood — and where the viruses may have a better chance of reaching a new host.

Virologists see some important lessons that the myxoma virus can offer as the world grapples with the Covid pandemic. Both diseases are influenced not only by the genetic makeup of the virus, but the defenses of its host.

As the pandemic continues its third year, people are more protected than ever thanks to the immunity that has developed from vaccinations and infections.

But the coronavirus, like myxoma, has not been on an inevitable path to mildness.

The Delta variant, which surged in the United States last fall, was more deadly than the original version of the virus. Delta was replaced by Omicron, which caused less severe disease for the average person. But virologists at the University of Tokyo have carried out experiments suggesting that the Omicron variant is evolving into more dangerous forms.

“We don’t know what the next step in evolution will be,” Dr. Katzourakis warned. “That chapter in the trajectory of virulence evolution has yet to be written.”