The Centers for Disease Control and Prevention has identified 21 monkeypox cases in 11 states, and the numbers are expected to rise, officials reported on Friday.

Genetic analysis has revealed that while most of the cases appear to be closely related to the outbreak in Europe, two patients — one in Florida and one in Virginia — have versions of the virus that seem similar to the one infecting a patient in Texas last year.

That suggests there have been at least two separate incidents where the virus spilled over from animals into people, the agency said.

Of 17 U.S. patients for whom the agency has detailed information, all but one were men who had sex with men; 14 had traveled to other countries in the three weeks before their symptoms began. Three patients were immunocompromised.

C.D.C. researchers have not been able to identify how one patient in an unnamed state acquired the virus. That suggests there is ongoing community transmission at least in that state and possibly others, Dr. Jennifer McQuiston of the C.D.C. told reporters.

“We want to really increase our surveillance efforts,” she said.

Health officials have identified a total of about 400 contacts of 13 patients who also risk becoming infected with monkeypox. Identifying contacts at risk will help officials determine what resources are needed to contain the outbreak. 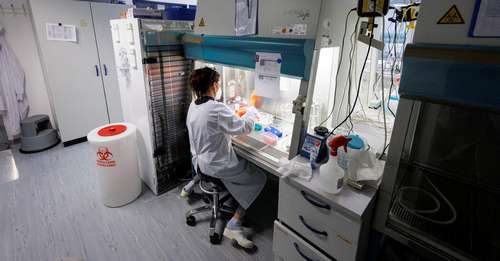 So far, health officials have delivered about 1,200 vaccine doses and 100 treatment courses to eight states, according to Dr. Raj Panjabi, the White House’s senior director for global health security and biodefense.

Monkeypox’s toll worldwide rose sharply this week, to nearly 800 cases as of Friday. The spread of the virus to at least 31 countries outside Africa, where it is endemic, has raised alarm among scientists and public health officials.

Health officials in some countries are asking anyone who tests positive for monkeypox to isolate at home. Britain, which has recorded the most cases, has urged patients to abstain from sex until their symptoms have cleared, to use condoms for eight weeks after that and to limit interactions with pets and other animals, which may become infected.

As the outbreak expands, health officials worldwide are rushing to gather vaccines and treatments to protect infected people and their close contacts. The options are severely limited.

The United States is among the few countries to have stockpiled millions of doses of vaccines and drugs for smallpox as a precaution against its return. Monkeypox is closely related to smallpox, and the vaccines and drugs are expected to be about as effective.

In theory, at least two drugs and two types of vaccines are available to combat a monkeypox outbreak, but most of these have been tested primarily in animals.

In a recent study of the two drugs in seven patients, only one appeared to offer any benefit, while the other produced toxic side effects.

The older of the two vaccine options was used to eradicate smallpox and can cause harsh side effects, including heart problems and death. Most doses have been in storage for decades and may have lost their effectiveness.

The second vaccine option, made by the Danish company Bavarian Nordic, was approved by the Food and Drug Administration in 2019 to prevent smallpox and monkeypox. Called Jynneos in the United States, it is safer than earlier vaccines, but supplies are even more limited.

Several countries, including Canada, Britain and France, have already begun vaccinating close contacts of infected people, and many others have placed orders to Bavarian Nordic for additional supplies.

Several experts noted that African countries that have battled monkeypox for years have had little to no access to these vaccines and treatments. So far this year, 44 cases have been recorded in Nigeria and six other African countries where the virus is endemic, but those numbers are likely to be an underestimate.

In Switzerland, the World Health Organization maintains about 2.4 million doses of the vaccine used to eradicate smallpox, and it has stockpiled another 31 million doses in five donor countries that could be released to countries in need.

But the W.H.O. had previously recommended the vaccine only for people at high risk of exposure, said Tarik Jašarević, a spokesman for the organization. Experts convened by the W.H.O. were scheduled to review the guidance in October, but “that timeline will need to be sped up,” he said.

The W.H.O. is also assessing the newer Jynneos vaccine for prequalification, a step needed for its use in many countries.

The U.S. emergency stockpile holds 100 million doses of an older smallpox vaccine called ACAM2000. But the vaccine contains live vaccinia virus, and causes about six cases of myopericarditis — inflammation of the heart muscle — for every 1,000 people who receive it.

ACAM2000 cannot be used in pregnant women, infants or those who are immunocompromised — exactly the people who most need protection from the monkeypox virus.

Jynneos, by contrast, has been shown to be safe in older adults, people with H.I.V. or AIDS and those who have received bone marrow transplants and are therefore immunocompromised.

In all, the United States has access to about one million doses, he said.

People infected with monkeypox can be vaccinated even a few days after exposure. They can also be treated with one of two drugs approved to treat smallpox, tecovirimat and brincidofovir, which slow the virus and buy the immune system time to rout it.

How infectious is it? The virus spreads through body fluids, skin contact and respiratory droplets. Typically it does not lead to major outbreaks, though it has spread in unusual ways this year, and among populations that have not been vulnerable in the past.

Should I be worried? The likelihood of the virus being spread during sexual contact is high, but the risk of transmission in other ways is low. Most people have mild symptoms and recover within weeks, but the virus can be fatal in a small percentage of cases. Studies also suggest that older adults may have some protection from decades-old smallpox vaccinations.

The F.D.A. has approved an oral form of tecovirimat, also called Tpoxx, to treat smallpox in adults and children who weigh at least 13 kilograms, or 28.6 pounds, although the drug was never tested in children.

The drug, made by the New York-based company Siga Technologies, is taken twice daily for 14 days, and in safety trials it did not seem to have serious side effects beyond gastric symptoms.

The U.S. stockpile holds 1.7 million courses of tecovirimat. On May 12, before the monkeypox outbreak emerged, the Department of Defense procured another $7.5 million in drug courses, about half of which were to be delivered this year.

“A significant number of countries” have requested courses of the drug since the outbreak began, said Dennis Hruby, chief scientist at Siga. By the end of June, the company expects to have up to 190,000 treatment courses to distribute, he said.

The F.D.A. worked with Siga to develop an intravenous formulation and approved it on May 19. This version can be used in patients who cannot take the oral medication because of blisters in their mouths.

Health Canada, the country’s national health department, approved tecovirimat in 2020 and has purchased doses worth $13 million, according to Dr. Hruby. The European Medicines Agency also endorsed the drug in January to treat all orthopox viruses — the viral family that includes both smallpox and monkeypox — but was still negotiating with the company when the outbreak emerged.

Tecovirimat and brincidofovir were both approved under the F.D.A.’s Animal Rule, which allows the agency to rely on data from rodents or monkeys when it is unethical to test a drug in people.

The second drug, brincidofovir, is made by Chimerix and appears to have more side effects, including a risk of death, prompting the agency to issue a so-called black box warning — its most stringent warning — on the drug’s use.

In the recent study of both drugs, brincidofovir “was not observed to confer any convincing clinical benefit,” researchers reported. But the study was too small and the treatment regimens offered to the patients were too varied to draw any conclusions about the efficacy of the drugs, said David Evans, a virologist at the University of Alberta who consults for Chimerix.

Those who cannot safely take either tecovirimat or brincidofovir — people who are immunocompromised, for example — can be given an immune therapy called vaccinia immunoglobulin, but only limited quantities exist.

The United States is helping to develop a cocktail of monoclonal antibodies that can block the monkeypox virus. Several vaccines are also in early stages of development, including some that rely on horsepox.

In the long run, it may make sense for the United States to stockpile enough vaccines and drugs to protect the entire population — including those who may have been vaccinated for smallpox in childhood, said Dr. Seth Lederman, chief executive of Tonix, which is developing a horsepox-based vaccine.

Multiple studies suggest that people who have been vaccinated for smallpox may be protected from severe illness, if not infection. But developing even a few lesions would be enough to spread the virus to others, Dr. Lederman noted.

“In the case of something like monkeypox, I think the goal would be so that people don’t get lesions,” he added.

Tonix’s vaccine will not be available for use in the current outbreak. “Our approach will be to go slow and steady,” he said. “These problems aren’t going away.”

Roe v. Wade and Birth Control: What to Know About Access and Options