Russia appears to have faked trial results of its flagship Covid vaccine, according to an analysis. A team of researchers in Australia and Singapore, who pored over the original study, have uncovered what they believe is proof the Kremlin fabricated efficacy data.

Russian scientists claimed the jab produced nearly identical results across five different age groups when the trial was published last year. It sparked claims among some experts the results were ‘too good to be true’, given the tiny numbers of infections that occurred in each cohort.

Now researchers have run the trial through a simulation model 50,000 times to test the likelihood of the results being genuine.

They found the chance of replicating the same efficacy across all five age groups again was just 0.02 per cent.

The Sputnik V jab has been mired in controversy since Russia announced its approval in 2020, before the trial had even wrapped up.

Dr Kyle Sheldrick, from the University of New South Wales, who led the new analysis, told MailOnline: ‘If you think about it, this trial didn’t really have the option of failing.

‘There are signs, and lots of reasons to think, that someone might have manipulated this data after the study finished.’

Hundreds of millions of people are thought to have been vaccinated with Sputnik worldwide. Around 70 countries had placed orders worth up to £7billion before Russia’s invasion of Ukraine. 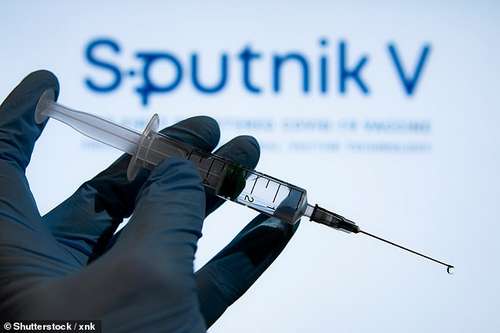 Russia appears to have faked trial results of its flagship Covid vaccine Sputnik V, according to an analysis (stock image)

Researchers took the trial data and ran it through a simulation model 1,000 times to see how often each study could produce the same combination of results. They were unable to replicate the findings in 1,000 attempts

The team were able to reproduce the Western vaccine results within two to four repetitions. For example, out of 1,000 tries, Moderna’s results were replicated 511 times

Sputnik – which is based on the same adenovirus technology as AstraZeneca – was held up as being 92 per cent effective at preventing symptomatic Covid infection following the phase three trial.

That was comparable with the Moderna (94 per cent) and Pfizer (95 per cent) vaccines and significantly higher than the AZ jab (79 per cent).

Dr Sheldrick and his team analysed the phase 3 clinical trials of all of Australia’s approved Covid vaccines — Pfizer, Moderna, AZ, Johnson and Johnson and Sputnik.

In all five trials, people were split into two similarly-sized groups with one receiving a vaccine and the other being a placebo.

Vaccine efficacy was based on the rates of symptomatic Covid in the jab group compared to the control group.

The Russian vaccine had the fewest participants, with roughly 21,000, compared to the Western jabs which recruited as many as 45,000.

Russian scientists also split the participants into five age groups, whereas the other vaccine studies kept cohorts limited to two or three.

‘Lots of people looked at the Sputnik trial at the time and thought it was very ballsy the way they designed it,’ Dr Sheldrick said.

‘Let’s say you have one infection in the 18 to 30 age group and an efficacy of 90 per cent, and then just one more person gets infected, now your efficacy can suddenly drop to 75 per cent, for example.

‘The numbers are so incredibly small that if one person gets a different outcome you can get massively different results.’

Yet all of the subgroups in Sputnik’s trial had an efficacy of more than 90 per cent, which Dr Sheldrick said was ‘too identical to be possible’.

Russian scientists from the Gamaleya Research Institute said it highlighted just how consistent the vaccine was, which Dr Sheldrick described as ‘ridiculous’.

How did Sputnik’s trial results compare to other jabs? Sputnik – which is based on the same adenovirus technology as AstraZeneca – was held up as being 92 per cent effective at preventing symptomatic Covid infection following the phase three trial. That was comparable with the Moderna (94 per cent) and Pfizer (95 per cent) vaccines and much higher than the AZ jab (79 per cent)

As part of the new analysis, researchers gleaned vaccine efficacy figures and infection rates taken from every cohort across all five studies.

They then plugged them into a simulation model and ran the trials 1,000 times to see how often each study could produce the same combination of results.

The team were able to reproduce the Western vaccine results within two to four repetitions.

Covid lockdowns have created a ‘global crisis for mental health’, the World Health Organization has admitted.

An international report by the UN agency found two years of restrictions have led to ‘significant mental health consequences’, especially for young people.

The WHO now estimates more than a billion people around the world are living with a mental health disorder as a result, a quarter more than pre-Covid.

It said there had been an even bigger rise among children, ‘potentially reflecting the deep impact of school closures’.

Curbs imposed to control Covid led to feelings of ‘social isolation, disconnectedness and uncertainty about the future’, the report added.

The admission comes despite the WHO hailing China’s lockdowns at the start of the pandemic and warning that lifting measures too early in Britain may cause a ‘deadly resurgence’ in 2020.

Schools were closed nationally at least twice over the course of the pandemic, with students also forced to learn from home because of individual closures.

More than 100 countries also shut down schools during the peak of the first wave.

The WHO World Mental Health Report was published on June 16 by the WHO’s mental health and substance division.

It was designed to improve mental health across the world, looking at all the latest data available with case studies from people living with conditions.

It said more than one billion people are now living with a mental health condition, after increasing by more than 25 per cent dung the first year of the pandemic.

The most common types include anxiety, depression and developmental disorders like autism.

But children were worst affected by restrictions, officials said, with rates of bullying and abuse at home increasing and a lack of social interaction causing isolation during school closures.

But they were not able to replicate Sputnik’s results in 1,000 attempts.

They then ran the Russian trial 50,000 times and found it took 3,846 attempts to achieve the same results.

Writing in the paper, the team said: ‘The distribution of alleged vaccine efficacies of the Sputnik vaccine by age in the phase-III trial is very unlikely to occur in genuine experimental data, even if the number of patients recruited, vaccine efficacy, and overall infection rate are true and there is no underlying difference in vaccine efficacy by age.’

Dr Sheldrick first raised concerns about the veracity of the trial results a year ago to The Lancet, the prestigious medical journal which published a peer-reviewed version of the original Sputnik study.

While The Lancet described the claims as ‘interesting’, it said there was not enough evidence to show the results had been faked.

In a rejection email seen by MailOnline, a reviewer at The Lancet said: ‘I’d agree with the author that it would be good to see the data, but I don’t see the failure to provide these data (yet) as strong evidence of the original authors being up to no good.’

They added that it was ‘important to uncover bad trials’ but claimed the analysis was too ‘blunt’.

The email concluded: ‘That doesn’t sit well if one is then in effect accusing researchers of fraud.’

Their analysis has only now been published in the American Journal of Therapeutics.

Dr Sheldrick said his analysis ‘doesn’t necessarily mean the vaccine doesn’t work’ but admitted he would not take Sputnik himself.

‘I think the vaccine probably does work, I don’t think the whole thing was made up but I think it was done in a massive rush,’ he told MailOnline.

‘I just don’t think you can trust these trial results. When you take those things together, I wouldn’t have it.’

Around 80million Russians have been vaccinated with Sputnik and billions of doses were ordered by 70 countries — mostly in the developing world, the Middle East and parts of eastern Europe.

Vaccination data in Russia is hard to come by so it is unclear how effective the jab is in the real world or if there have been any adverse reactions.

Mr Putin was accused of trying to elevate the country’s international standing by being the first to have a vaccine for the disease in late 2020 — and it was given its name as a nod to the world’s first space satellite, Sputnik.

It uses the same technology as AstraZeneca’s vaccines that involves teaching the body how to fight off Covid by using a weakened common cold virus.

Russia was accused of attempting to steal proprietary information about the UK jab from labs in Oxford in 2020.

The UK’s cyber security watchdog said it was ’95 per cent’ confident ‘Russian intelligence agencies’ were responsible for the attacks on drug companies and research groups. Similar attacks were carried out in the US and Canada, it said.

It was never revealed if the Kremlin managed to access sensitive medical information.

But numerous investigations and reports have found evidence of Russia attempting to interfere and undermine vaccine rollouts around the world.

A probe by the US State Department in April 2021 said Russia was behind a vast campaign ‘to spread propaganda and lies’ about the American-made Pfizer and Moderna jabs.

The ministry took specific aim at the official Sputnik Twitter account, which it said ‘sought to undermine public trust’ in medical regulators.

The Sputnik account has also been used by the Kremlin to undermine Western jabs and attack its critics.

On April 23 2021, it published unfounded claims that vaccines made by Pfizer, Moderna, AstraZeneca and Johnson and Johnson were killing more people than countries were officially disclosing.

Professor Carl Bergstrom, a biologist at the University of Washington, said at the time they were ‘completely nonsense statistics’, adding that ‘no one with an iota of quantitative understanding would do this, unless trying to deceive’.

The claims, made in a ‘Sputnik V study’, looked at anyone who died from any cause and had received at least one Western vaccine in an attempt to question their safety profiles.

Sputnik’s account claimed the study showed ‘there are significantly more deaths following vaccination with Pfizer than with AstraZeneca vaccine per 1million administered doses.’

Follow-up tweets on April 26 took an even more aggressive tone, accusing vaccine makers of ‘pressuring media not to report’ the figures.

Scientist warns monkeypox may be spreading undetected in Massachusetts

C.D.C. Is Investigating 109 Cases of Hepatitis in Children, Including 5 Deaths